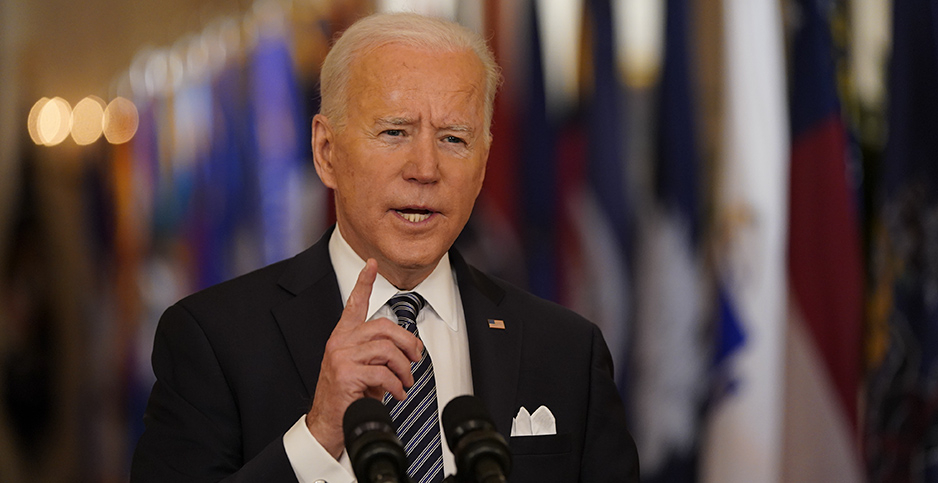 President Biden during his speech to the nation last night. Sipa USA/Newscom

After a year of seeing top priorities sidelined in the multiple phases of COVID-19 relief, interest groups are already stepping up pressure to steer the upcoming infrastructure package toward clean energy and climate goals.

Despite applauding yesterday’s enactment of the $1.9 trillion relief bill, progressive groups made clear they’ll go after Democrats who try to stymie the size and scale of the next package.

Citing a Politico story about centrist Senate Democrats concerned over the mounting federal deficit, the Sunrise Movement lashed out at senators mentioned in the piece, including Environment and Public Works Chairman Tom Carper (D-Del.).

"The fact that Senate Democrats are already placing time and cost constraints on an infrastructure package is outrageous," Sunrise Movement press secretary Ellen Sciales said in a statement. "Democrats always maintain they have big, bold ideas but claim their hands are tied by Republicans. In reality, Democrats are tying their own hands."

The criticism previews the coming pushback from progressive groups to any efforts to downsize the infrastructure package — or to include policies that continue the use of fossil fuels.

The group 350.org said yesterday in a statement that it will host a week of action starting March 29 to pressure the Biden administration "to take real action to Build Back Fossil Free."

Other green groups reminded Democrats of the hopes surrounding the infrastructure bill, which is expected to include clean energy tax breaks, grid improvements and provisions to boost the resiliency of infrastructure to a warming planet.

League of Conservation Voters President Gene Karpinski yesterday hailed the latest COVID-19 relief bill as "an important first step" but in a statement called for quick action on "broader economic recovery that centers climate solutions, makes transformative investments in healthy, equitable, safe communities powered by clean energy, and gets millions of people back to work in good-paying jobs."

Clean energy groups, which have waited for a year to see pandemic relief, are also gearing up for the infrastructure push.

The Business Council for Sustainable Energy (BCSE) yesterday outlined a laundry list of clean energy policies for inclusion in the infrastructure package.

"Clean energy must be recognized as a key component to any infrastructure legislation," said BCSE President Lisa Jacobson in a statement.

Earlier this year, observers were expecting President Biden to announce the Democrats’ agenda in a joint session of Congress, but that has yet to be scheduled.

In a speech last night to the nation, Biden touched on the newly approved relief package but focused on other pandemic goals.

"If we all do our part, this country will be vaccinated soon, our economy will be on the mend, our kids will be back in school, and we’ll have proven once again that this country can do anything: hard things, big things, important things," said Biden.

Asked about some next steps, White House press secretary Jen Psaki said, "We just don’t have a legislative package we’re even talking about here."

Speaker Nancy Pelosi (D-Calif.) told reporters yesterday there has been a long tradition of bipartisan infrastructure legislation and that she hopes the pending package will have buy-in from both parties.

Pelosi said projects should benefit Republican and Democratic districts and added she did not want it to become a bill where the GOP "votes no but takes the dough" for its local communities.

Pelosi hinted that Congress would have "to pay for some of it" and said one option could be user fees without offering more specifics.

She also said better roads and transit systems would lead to cleaner air and said a priority would be upgrading water systems, some of which are more than 100 years old.

House Energy and Commerce Committee Democrats outlined some of their goals in infrastructure legislation introduced yesterday, known as the "Leading Infrastructure for Tomorrow’s (LIFT) America Act." It reflects a similar bill they proposed last year that never advanced with Congress stalemated over infrastructure.

"By modernizing our infrastructure, we have an opportunity to revitalize our economy, create millions of new jobs, combat climate change and ensure no community is left behind," said Energy and Commerce Chairman Frank Pallone (D-N.J.).

Republicans are also readying their own bills. Rep. Rodney Davis (R-Ill.) yesterday introduced legislation that would streamline the environmental review process for infrastructure projects by imposing timelines and simplifying paperwork.

Senate EPW leaders, meanwhile, are seeking proposals from other senators for the surface transportation portion of the package and asked members to formally submit ideas to the committee by March 19. Leaders want the bill to become law by the end of September, when the current authorization expires.

"At this time, it is not our intention to include congressionally directed spending … so we ask that you limit your requests to policy and programmatic priorities," Carper, the panel’s chairman, and ranking member Shelley Moore Capito (R-W.Va.) wrote last month in a letter to all senators that was obtained by E&E News.

A Democratic aide said yesterday no decision had been made on whether to include earmarks in the highway bill, which is supported by some members as a means to build support and ease passage.

House Transportation and Infrastructure Chairman Peter DeFazio (D-Ore.) has said he would like to see earmarks in the surface transportation bill.

Senate Republicans said they are open to a deal on infrastructure but questioned if Democrats would be interested after passing the COVID-19 bill without any GOP support.

"I think bipartisanship took a major blow with the reconciliation process and the COVID relief package," said Sen. Mitt Romney (R-Utah). "To go it alone and accept none of our recommendations, nor to engage in any negotiations at all, was a very powerful statement."

Sen. Rob Portman (R-Ohio) concurred. "My job is to work with them; I’ll be continuing to extend an olive branch," he said. "The [COVID-19] bill was way bigger than it had to be."

Senate Democrats are weighing a variety of ideas about how to pay for the infrastructure push. Sen. Mark Warner (D-Va.), a Finance Committee member, said he was open to a range of user fees being talked about by Democrats to cover its cost, including a possible carbon tax, a vehicle mileage tax or increasing the current gas tax.

Warner also said he was open to having earmarks in the bill, provided that had safeguards. But he noted the "devil’s in the details" in reviving directed congressional spending.