Pressure is on Georgia Power to finish Vogtle 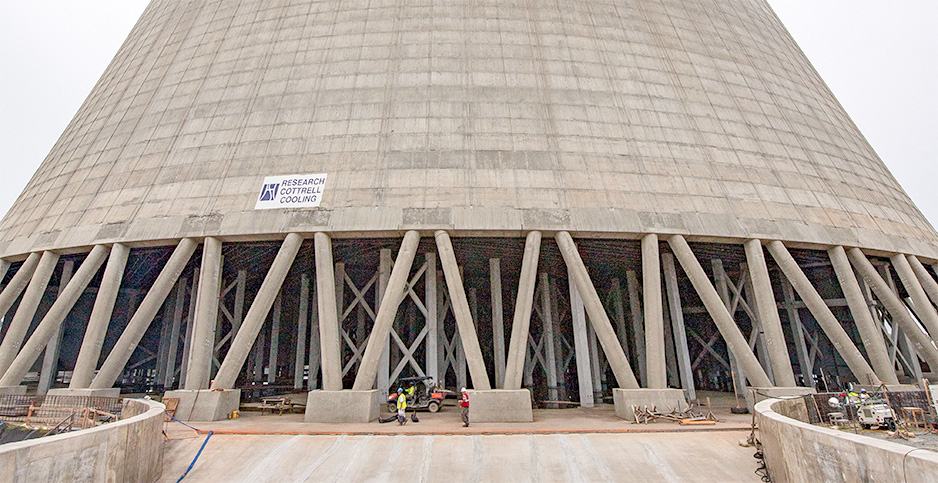 The Unit 3 cooling tower at Plant Vogtle is seen in this August photo. Georgia Power Co.

By taking on an increased risk in the Plant Vogtle nuclear expansion project, Southern Co. also ramped up the pressure to finish the reactors on time.

It remains unclear whether that will happen, despite repeated assurances from the company’s Georgia Power unit that the reactors will be producing electricity by November 2021 and 2022.

Vogtle is the nation’s first set of reactors to be built from scratch in nearly 30 years. The project hasn’t met a timeline or a budget since Georgia Power presented the plan to build it to state utility regulators in 2008.

Even now, with Southern’s nuclear unit and Georgia Power at the helm, the costs have jumped $2.3 billion in one year. That was a chief reason why one of the public power companies wanted out unless Georgia Power agreed to cap the costs.

The result was a convoluted agreement among all four of Vogtle’s developers to keep the nation’s only nuclear project afloat. The agreement, released late Wednesday afternoon, includes off-ramps for the public power companies and gives Georgia Power the right to cancel the project at any time.

A new ownership agreement last year gave a list of reasons that would require the partners to vote on whether to finish the reactors. That list has narrowed, and because of that, "it is important that Georgia Power as the agent for the project has the right to cancel the project if circumstances warrant," company spokesman Jeff Wilson said in an email to E&E News.

Georgia Power also must pay more in construction costs once the budget hits certain thresholds until $2.1 billion. That is the critical juncture where one of the other developers could walk away and sell its portion to the utility.

Or, again, Georgia Power could fold. It has that option if it doesn’t want to take on any more ownership risk, Wilson confirmed.

Another $2.1 billion budget jump seems high. But Vogtle’s costs now stand at $25 billion, which is significantly more than the original $14 billion price tag set in 2008.

This means a key question is: How realistic is it that the number will be reached?

The answer likely will be revealed in the coming year. Productivity has improved under Southern Nuclear and contractor Bechtel Corp., to the point that the project has been moving ahead of its new timeline.

But Georgia Power has signaled publicly that it is having trouble hiring enough craft workers to meet aggressive productivity targets. That’s the key to getting the reactors finished on time.

To be clear, Southern’s CEO told analysts in August that work at the site must ramp up to a peak productivity rate and stay at that level for the next 18 months. Southern has added financial incentives and has expanded its geographic hiring scope.

Doing this is the most critical part to Vogtle’s future, Fanning said at the time. Any extension of Vogtle’s schedule will add roughly $50 million a month in additional base capital costs for Georgia Power, which owns a 45.7 percent share of the project, according to Southern’s quarterly filing made in August.

For its part, members of the Georgia Public Service Commission staff have said that just a two-month delay would push the reactors back into a scenario they deemed "uneconomic" for customers, however.

As predicted, financial analysts were happy that Vogtle has a future. But some were not confident about maintaining the schedule, even as Georgia Power added some financial incentives if the reactors are finished below their current budget.

That is something "we think is a massive free call option given historical precedence for this and other similar nuclear projects," analysts from Guggenheim Securities LLC wrote in a research note yesterday.

"For this benefit to be realized, it’s key that productivity measures come to below the past trends," they wrote. "We will continue to monitor productivity levels closely … the cost and labor productivity issues must subside, and this isn’t something we will get much clarity on until future [cost-and-schedule monitoring] hearings."

Georgia Power will update the PSC and others on Vogtle’s productivity and schedule status in an upcoming filing in October and during public hearings in November, Wilson said. The utility also believes the revised cost forecast and contingency "should be sufficient" to finish the reactors.

"However, the company recognizes that a nuclear construction project may continue to experience challenges, and that unanticipated events may require further revision to the capital cost forecast and project schedule to get to completion," Wilson said.

It’s not the first time the question has surfaced of how much Southern can manage the project risk. Financial analysts pressed Fanning for certainty when he discussed the $2.3 billion budget increase in August.

The costs went up in part after the owners expanded the scope of work by Bechtel Corp. and Southern Nuclear to ensure they can finish the reactors on time. This highlights a main challenge with nuclear: meeting stringent safety and regulatory standards.

Fanning argued that in one year, Southern Nuclear now knows 75 percent of the exact costs of those estimates. That means that about 25 percent of the subcontractor contracts remains unclear.

The uncertainty worries consumer and environmental advocates, as well.

"Georgia Power clearly has no faith in its ability to finish this plant without more billion-dollar surprises," said Kurt Ebersbach, a senior attorney with the Southern Environmental Law Center, who frequently represents others before the PSC in Vogtle matters and has a lawsuit about the regulators’ decision to greenlight the project in Fulton County Superior Court.

That Vogtle’s budget had increased by more than $1 billion and that Georgia Power elected to absorb its share of the cost triggered the other owners to reassess whether they wanted to stay in as business partners.

With the exception of Dalton Utilities, which owns a 1.6 percent share, if any of the others walked away, Vogtle would collapse. It looked that way for a few days this week. Oglethorpe Power Corp. and the Municipal Electric Authority of Georgia (MEAG) needed to cast a ballot by Monday night.

MEAG unanimously agreed, but Oglethorpe set conditions that future construction costs would be capped. Because Southern and Georgia Power are the ones with shareholders, it would be up to them to agree to a cost cap.

Southern and Georgia Power would have to agree to eat not only their costs but the expenses of the other partners, as well.

Powerful, angry public statements coming from Oglethorpe and the other business partners Monday night and Tuesday morning made it clear that this battle had morphed into an all-out war, with Vogtle’s future at stake. It forced everyone to negotiate for something, especially if they didn’t want to deal with what would be a strong political backlash.

"It was interesting that they played this game of chicken," said Paul Patterson, a utility analyst with Glenrock Associates LLC.

After the curtain closed on the drama, not much had changed, he said.

"It’s a significant amount of money [for Georgia Power to pay], but you remember, it’s a large project, and Southern is a very large company."

The bigger challenge is execution.

"The real issue is that Georgia Power has to complete this project. It has to get this behind it," he said.