Price on carbon may be sweet spot for Midwest grid operator 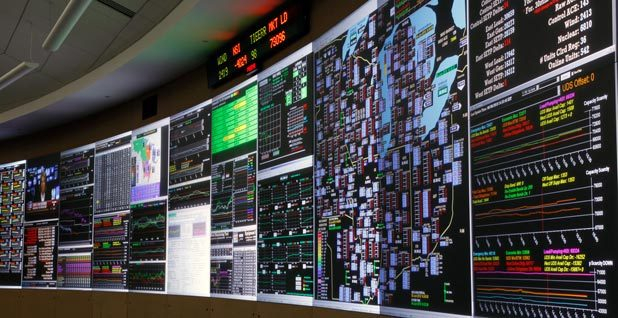 Setting a price on carbon emissions could be the most effective way for operators of power plants in the Midwest to comply with U.S. EPA’s Clean Power Plan, according to a senior executive with the region’s grid operator.

Allowing "for the formation of some sort of price for generating an emissions amount of carbon" would mirror what happens now in the Midcontinent Independent System Operator with regard to sulfur dioxide emissions, said Todd Ramey, vice president for system operations and market services.

MISO runs the electric grid serving all or parts of 15 states ranging from the Canadian border to the Gulf of Mexico.

"Today, there is a monetary opportunity cost of producing or choosing not to produce a ton of SO2; a price that is relatively transparent and fungible that everyone knows," said Ramey during a recent interview at MISO’s Carmel, Ind., headquarters.

"The generators know that if they consume or produce SO2 they’re consuming those credits — it’s a mass-based approach for implementing SO2 reductions.

"If we were to adopt a very similar approach for carbon, there’s no reason to expect that it wouldn’t work equally, as well," Ramey said.

A carbon price "would allow us to avoid re-balkanizing our grid and it would allow easy integration into current [regional transmission organization (RTO)] processes that have driven billions of dollars of savings and every day improved reliability for the bulk electric system. So, yeah, we certainly see that that would work," he said.

The MISO bulk electric system, made up of 40,000 individual pieces of equipment, is monitored from MISO’s four control centers. There, Ramey’s team manages the round-the-clock balancing of electricity generation from 1,400 plants with peak demand of about 130,000 megawatts.

For Ramey, it is important that MISO adheres to a role of providing information and offering choices to its 250 members.

"MISO’s a stakeholder-driven organization, so first and foremost we want to make sure that the work we’re doing is consistent with the wishes of the membership. We don’t want to get in front of our stakeholders" on an issue with political overtones such as the Clean Power Plan, he said.

"Among the many benefits that RTOs provide, one of the ones that’s a little more intangible but of potentially huge value is that they represent a platform for facilitating and implementing public policy decisions. So this question around the Clean Power Plan, around public policy, around carbon control, is a perfect example.

"Having good rules that provide the right incentives for individual players to make choices that are collectively in support of achieving policy goals is perfectly applicable to the Clean Power Plan," Ramey said, adding that "MISO really doesn’t have a dog in the hunt as to the question of whether it’s good policy."

EPA’s proposed rule would reduce carbon dioxide emissions 30 percent below 2005 levels by 2030 using Section 111(d) of the Clean Air Act. The agency’s version of a final rule was sent to the White House Office of Management and Budget last week for a thorough interagency review.

The final rule is slated for release in August. Also at that time, the agency will release its plan to control CO2 from new and modified power plants, as well as a federal plan to comply with the Clean Power Plan for states that choose not to craft one of their own.

One aspect of the final rule important to MISO’s generators is a so-called safety valve to ensure that plants critical to maintaining grid reliability stay online.

"MISO’s definitely supportive of the idea of having some sort of safety valve as part of the final rule," Ramey said.

"But along with that, we also say if you ever get to the point where you actually need to use the safety valve, then that means you had a poor design. A good design will allow us to move forward and allow compliance across the region. So having a safety valve is a good insurance policy, but like insurance on your home, you want it to be a less than 1 percent probability you’ve got to pull that trigger," he said.

Another feature of the final rule MISO thinks is critical is an inducement for states to comply on a regional basis. In September, MISO released a study that concluded a regional approach would reduce compliance costs by as much as $3 billion annually (EnergyWire, Sept. 18, 2014).

MISO is slated to release its third study on the Clean Power Plan in August, with this one focusing on transmission, generation and natural gas pipeline infrastructure across the region. Among the questions it will grapple with is "is there enough gas infrastructure to meet the needs of wholesale change out of existing coal to gas-fired generation?" Ramey said.

Ramey said MISO has made it clear to EPA and the Federal Energy Regulatory Commission that the final rule has to "maximize incentives for everyone to at least not reject regional solutions. Don’t make regional a nonstarter for any of the participants," he said.

As reliability goes down, costs go up

What Ramey fears is that local or state-level concerns will drive different paths for compliance with the EPA rule. That "essentially translates into states deciding when their [generating] units run and which units are running at what output level," Ramey said.

The results would be "very less reliable" electric service and "definitely at higher price. You can count on it if reliability goes down, the cost is going up," he said. "That’s a given."

A "broad regional solution" to compliance with the EPA rule led by MISO "could still work" if some stakeholders choose "a much more narrowly, locally focused compliance strategy," Ramey said.

"It’s a question of scale," he said, pointing again to his 15 states and 1,400 generators. "If one state out of 15 chooses to go locally and they kind of remove flexibility for the hundred units that are in their state, I’ve still got 1,300 generators that are very flexible. I can probably operate around it."

In practice, assigning a carbon price to facilitate compliance with the Clean Power Plan "doesn’t change anything in terms of the basics of how RTOs operate unit commitment and dispatch to the system," Ramey said.

"We would have a different incremental dollar-per-megawatt-hour impact per unit based on that unit’s carbon production. What would result is different cost structure for the units as compared to today, and our systems would adjust to that automatically," Ramey said.

"We’ve got 250-some-odd stakeholders that are part of some business that’s different in some way from all the other 249. So the process of collectively engaging and collaborating with a large group of people where MISO is the independent arbitrator of what we think is the best solution or combination of solutions for the region has been in place since I’ve been here 14 years," Ramey said.

"A Clean Power Plan solution would really be no different: Everyone will come with their own individual view of what the best answer is for their company, but what makes it successful is they also know that even though they work for one company, they’re part of the solution that’s best for the region."