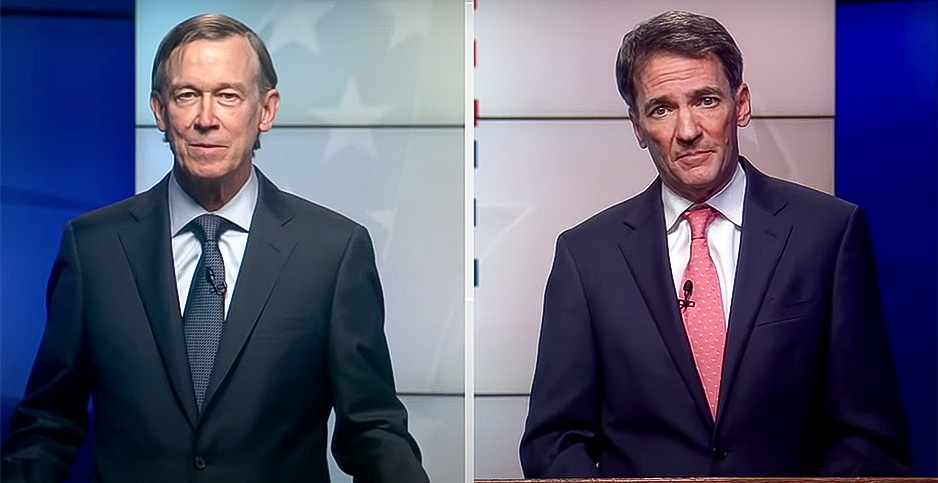 Former Colorado Gov. John Hickenlooper will find out tomorrow whether Democratic voters are willing to overlook several stumbles — including a state ethics investigation and insensitive racial remarks — and nominate him to take on Republican Sen. Cory Gardner in November.

Democratic voters in Colorado will pick between Hickenlooper and former state House Speaker Andrew Romanoff to set up the general election for what is expected to be one of the nation’s most competitive Senate seats this cycle (E&E Daily, June 17).

People will likewise cast ballots in Utah tomorrow — setting the slate for the state’s open gubernatorial race and the 1st District seat — and in Oklahoma.

In Colorado, the secretary of state reported that nearly 500,000 ballots had already been cast in the Democratic primary as of Friday morning.

Hickenlooper, who began his political career as Denver’s mayor in 2003 and went on to serve two terms as governor, is the establishment candidate in the race.

The Democratic Senatorial Campaign Committee backed Hickenlooper, who staged a brief Democratic presidential primary bid last year, within days of his entry into the race.

But to take on Gardner, Hickenlooper must first fend off a progressive challenge from Romanoff, his sole competitor for the seat.

Romanoff, who has positioned himself aggressively on health care and climate change policies, is making his third bid for federal office. The former state lawmaker lost a 2010 primary challenge to Sen. Michael Bennet (D) and a 2014 attempt to oust then-Rep. Mike Coffman (R) (E&E Daily, May 6).

Throughout the primary, Hickenlooper has touted his popularity in the state to argue he is the better candidate.

"I can’t wait to run against Cory Gardner," Hickenlooper said in a debate earlier this month, pointing to his election victory in 2014, the same year Gardner won his first Senate term by defeating then-Sen. Mark Udall (D).

He went on to disparage Romanoff’s record, adding: "Inside the state of Colorado, I haven’t lost yet and Andrew hasn’t won an election in 14 years."

But at the same time, Hickenlooper faces new stumbling blocks, including a Colorado Independent Ethics Commission review of his travel activities as governor and the panel’s determination that he violated gift rules on two occasions.

In recent weeks, Hickenlooper has also been forced to address remarks he made in 2014, when he compared the duties of an elected official with being whipped on an "ancient slave ship" (E&E Daily, June 17).

"Democrats would be foolish to deprive Gardner of his least desired opponent," the letter states, before adding: "Simply put, there are few politicians in Colorado, from any party, who can match Hickenlooper’s record and personal story. Sometimes in life and in politics, issues are complicated. However, the decision for the election next November is an easy one."

The poll of 575 registered Democrats and unaffiliated voters, conducted for Denver’s NBC affiliate and Colorado Politics, showed 58% favoring Hickenlooper and 28% backing Romanoff. An additional 14% remained undecided. The June 19-24 poll had a 6-point margin of error.

Bishop, the top Republican on the House Natural Resources Committee, confirmed last year he would retire from Congress when his term ends in January 2021. Then, earlier this year, he joined former Utah GOP Chairman Thomas Wright as his gubernatorial running mate (E&E Daily, Jan. 17).

But Wright is very unlikely to win the primary. Former Gov. Jon Huntsman and Lt. Gov. Spencer Cox were virtually tied in a poll released last week by the Salt Lake Chamber of Commerce, with former House Speaker Greg Hughes in third place and Wright coming in last.

The primary winner is nearly guaranteed to win the general election in November, because Utah is solidly Republican. Gov. Gary Herbert (R), the incumbent, decided not to run again and endorsed Cox.

In the 4th District, centered on Salt Lake City, incumbent Rep. Ben McAdams (D) is a major target for Republicans in the November general election. He flipped the seat in the 2018 race.

Rep. Chris Stewart (R) in the 2nd District and Rep. John Curtis (R) in the 3rd District face no primary opponents and are unlikely to lose in November.

Utah’s primaries are being conducted almost entirely by mail, due to the COVID-19 pandemic, with limited numbers of voters allowed to submit ballots at drive-up polling locations.

Oklahoma also features a blockbuster race in which the GOP is trying to take back a seat the Democrats flipped in 2018.

Nine Republicans are vying for the chance to run against Rep. Kendra Horn (D) in the 5th District, where the Democrat won by less than a percentage point and Republicans hold a slight advantage.

The rest of Oklahoma’s incumbent House members, all Republicans, don’t have major primary challengers and are expected to be reelected in November.

Sen. Jim Inhofe (R) is also likely to win reelection. He chairs the Armed Services Committee, formerly chaired the Environment and Public Works Committee and has long been an outspoken climate change skeptic.

Voters were encouraged to vote with absentee ballots or vote early, but in-person voting will also be allowed tomorrow.