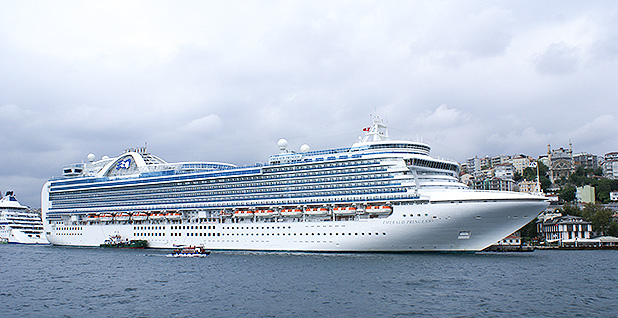 Princess Cruises will pay a $40 million criminal penalty for dumping oily waste into the ocean. Photo courtesy of Wikipedia.

According to DOJ, employees on the company’s Caribbean Princess vessel funneled untreated waste into the ocean from 2005 to 2013. The methods of discharging the waste varied over time, but most recently employees used what they called a "magic pipe," or an illegal bypass tube.

The $40 million penalty is the largest criminal fine ever in the United States for deliberate vessel pollution. A quarter of the money will go toward community service projects to improve the maritime environment.

In court documents filed in the U.S. District Court for the Southern District of Florida, federal and state officials said the Caribbean Princess began illegally discharging untreated bilge water into the ocean a year after it began operation.

Employees on the vessel used an unauthorized valve before installing the "magic" bypass pipe, the court documents said. According to DOJ, workers on the Caribbean Princess and four other Princess ships also routinely opened a saltwater valve when processing oily bilge water to confuse oil content monitors.

DOJ also said the ships pumped waste back into their graywater systems instead of processing it as waste. The graywater was discharged when the ships were at least 4 nautical miles from land.

According to DOJ, authorities discovered the practices when a newly hired engineer on the Caribbean Princess reported to the British Maritime and Coastguard Agency that the pipe had been used on Aug. 23, 2013, to discharge oily waste off the coast of England. The engineer quit his job once the vessel docked in Southampton, England.

The British agency alerted the U.S. Coast Guard, sparking an investigation. DOJ said that after the whistleblower reports, the chief engineer and the senior engineer ordered that the pipe on the Caribbean Princess be dismantled. Crew members then allegedly lied to Coast Guard officials when the vessel returned to New York City on Sept. 14, 2013.

Princess Cruises said in a statement today that it was "very sorry that this happened."

The company said it launched its own internal investigation along with cooperating with the DOJ and Coast Guard.

"We are extremely disappointed about the inexcusable actions of our employees who violated our policies and environmental law when they bypassed our bilge water treatment system and discharged untreated bilge water into the ocean," Princess Cruises said.

Carnival has previously been cited for environmental violations. In 2002, the company agreed to pay an $18 million fine for illegal dumping.

"The conduct being addressed today is particularly troubling because the Carnival family of companies has a documented history of environmental violations, including in the Southern District of Florida," U.S. Attorney Wifredo Ferrer
said in a statement.

Along with spending $10 million on community maritime projects, Princess Cruises will spend $3 million on environmental projects in South Florida and $1 million for projects in U.K. waters.