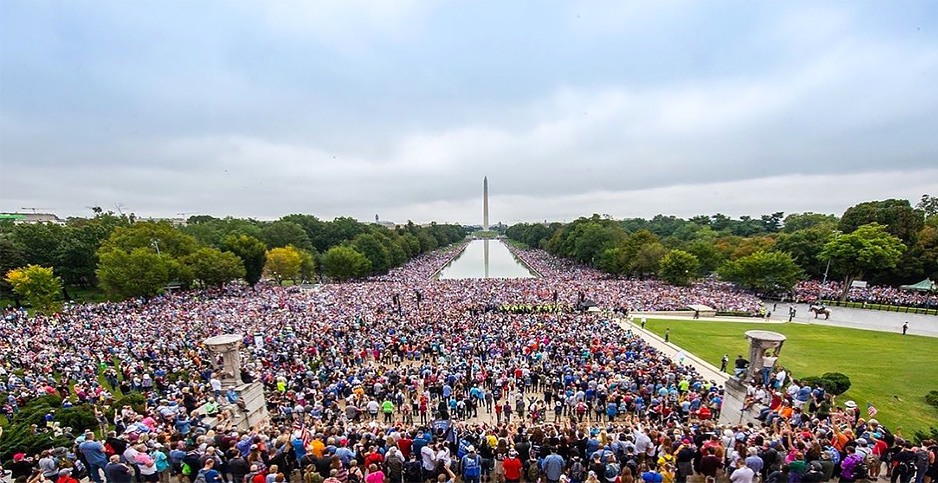 Worshipers gathered for a prayer day on the National Mall on Sept. 26. @seanfeucht/Twitter

Christian activists are planning an Oct. 25 "worship protest" on the National Mall to support President Trump’s nomination of Amy Coney Barrett to the Supreme Court, confident she would deliver the decisive vote on a ruling to ban legalized abortion.

"She has a strong record of defending the sanctity of life and religious freedom, and she is about to be attacked viciously by the radical left," tweeted the Rev. Sean Feucht, a California preacher, musician and Trump supporter who is helping organize the event. "Pray for her and pray for her family."

The Trump administration and its supporters have snubbed District of Columbia Mayor Muriel Bowser’s efforts to slow the spread of the coronavirus by controlling the size and behavior of crowds. The planned prayer rally — which is set for the day before the full Senate plans to take up the Barrett nomination — will be no exception.

While Bowser has prohibited gatherings of more than 50 people in the city, she has no authority to impose limits on land managed by the National Park Service. In an application filed with the Park Service, organizers said they expect a crowd of at least 15,000 people.

Despite fears that the event could lead to more widespread COVID-19 infections in the city, the park service said attendees will not be forced to comply with Bowser’s order that masks be worn in public by anyone older than 2.

"While the National Park Service strongly encourages social distancing, the use of masks and other measures to prevent the spread of infectious diseases, we will not require nor enforce their use," said Mike Litterst, chief of communications for National Mall and Memorial Parks.

The permit, sought by a group called Hold the Line, has yet to be approved. Litterst said the park service is still discussing a "COVID-19 mitigation plan" with event organizers but that it would not be a requirement or condition for getting a permit.

"For large and complex events such as this, it takes time to address all of the necessary logistical and security details so that the permit can be issued," Litterst said. "It is not unusual that permits for large events are issued no earlier than the week of the event."

Most recently, Nashville, Tenn., health officials launched an investigation after Feucht hosted a Sunday night event — without a permit — that drew thousands of people, most of them without masks.

Feucht boasted on Twitter that the event took place even though organizers had to change the location three times.

"THE CHURCH WILL NOT BE SILENCED," he said in his tweet. He told his followers that the group had done nothing wrong and that "we are tired of government officials telling us when, where and how we can practice our faith."

In its application with the Park Service, the group said the Oct. 25 event would be for "religious freedom, prayer [and] worship." The group said the crowd would stretch from 3rd to 14th streets on the National Mall. Organizers also requested a backup date of Nov. 1.

Litterst said the Park Service currently requires permits for any event with more than 25 participants, regardless of whether it’s for a First Amendment demonstration or not.

While Bowser’s pandemic restrictions helped lead to an overall decline in positive COVID-19 cases in the city, her earlier pleas for help from federal officials were largely ignored.

Bowser urged the public to stay away from the National Mall on July 4, only to have the Park Service approve a huge fireworks display sought by Trump, distributing 300,000 masks to attendees (Greenwire, July 2).

Bowser also complained when the president hosted a large gathering on the White House lawn on Sept. 26 to announce Barrett as his choice to replace the late Justice Ruth Bader Ginsburg on the Supreme Court.

Dr. Anthony Fauci, the nation’s top infectious disease expert, called the ceremony a "superspreader event" after nearly a dozen people who attended the event tested positive for COVID-19. Most attendees did not wear masks.

In a letter to the White House shortly after the event, Bowser said the federal government and city need to do more to work together. Otherwise, she said, all of the sacrifices and work done so far to stop the spread of COVID-19 are "put at jeopardy."

At least 46 new cases were reported yesterday in the city, The New York Times reported today. Over the past week, cases have risen by an average of 59 per day, contributing to a 49% increase from the average of just two weeks ago, the newspaper said.

The park service, which normally issues permits for more than 4,000 events on the National Mall each year, did suspend events for 13 weeks this year due to the pandemic.

When they resumed in June, the agency began encouraging applicants to follow guidance from the Centers for Disease Control and Prevention to slow COVID-19 infections. Park officials said they wanted to resume the issuing of permits to "ensure all groups have the opportunity to assemble and be heard."

Since then, the park service has signed off on other large-scale events, including the commemoration of the March on Washington on Aug. 28 and the Billy Graham Evangelistic Association prayer walk on Sept. 26.

Meanwhile, Barrett, who today faces her third day of grilling before the Senate Judiciary Committee, is expected to win the panel’s approval by Oct. 22 (see related story).

Republicans want the full Senate to debate and vote on her nomination the following week, getting her confirmed by Election Day.

Feucht, who went to the White House to pray for the president during the impeachment inquiry last December, said the Oct. 25 rally will come at a "divine moment in history."

In a posting on YouTube, Feucht said Barrett’s addition to the Supreme Court could finally overturn the landmark 1973 Roe v. Wade ruling that legalized abortion, but added that the rally will advance an even larger cause.

"What’s so profound about us gathering nine days before the election is that so we can come together and lift up the name of Jesus and say the government is upon his shoulders — we’re appealing to heaven. We’re believing that God is the only hope; he’s the only fix for the ills of the nation," Feucht said.

"And yeah, we’re going to pray for the reversal of Roe v. Wade, but I feel like primarily this is a gathering to protest the heaven to come to the earth over our nation."