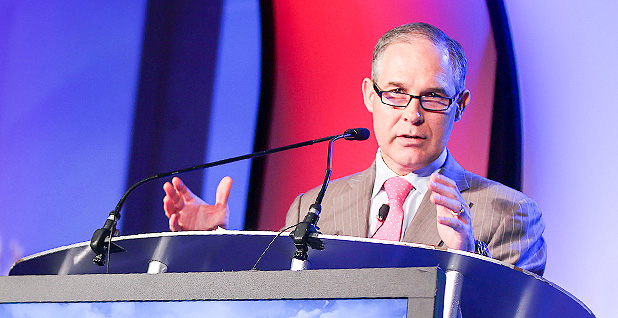 Now, the group promoting his nomination to U.S. EPA administrator has decided to stop publicizing them, too.

America Rising Squared, a Republican political group, has removed from its "ConfirmPruitt.com" website any mentions of his "double-dipping" cases against oil companies.

Pruitt has filed lawsuits against three oil companies alleging they got their insurance companies to pay to clean up leaking tanks at gas stations, then billed taxpayers for the same work.

For Pruitt and his supporters, the suits had served as the proof that Pruitt can get tough with oil companies, despite his reputation as a fossil fuel ally.

"Attorney General Pruitt has taken on polluters, including the oil industry, when there is cause," Barrasso said. He also recited America Rising Squared’s description of Pruitt’s double-dipping suits.

The suits proved to be problematic at the hearing. Pruitt at first said he’d sued Exxon Mobil Corp. but later had to clarify that he hasn’t yet filed such a case. He said his office is still in "settlement discussions" with Exxon and others.

A case against BP PLC, specifically noted by Barrasso, has been dormant since it was filed in 2012. A case against Valero Energy Corp. and its subsidiaries is pending, although the Valero holding company was dismissed from the case in September.

Pruitt quietly settled a case with Phillips 66 in September 2016 for $3.8 million. State employees who have been pursuing the case since 2004 said Pruitt fought them for months before filing his own case against the company (Energywire, Jan. 17).

Democratic Sen. Sheldon Whitehouse of Rhode Island dismissed the lawsuits as accounting fraud cases having "nothing to do with the environment."

Pruitt, who has issued more than 60 press releases about federal overreach and his suits against the Obama administration during his six years as attorney general, never issued a news release about the ConocoPhillips or BP cases.

That entry is now gone. The change was first noted in a tweet by a reporter for The Oklahoman newspaper in Oklahoma City. The remaining examples in the enforcement section of the fact sheet refer to Pruitt’s congressional testimony and a newspaper opinion piece rather than enforcement actions.

A spokesman for America Rising Squared did not respond to requests for comment.

The group is staffed by veterans of Republican presidential campaigns (Energywire, Jan. 10). As a nonprofit "dark money" group, it is allowed to keep its donors’ names secret. Its affiliated super political action committee has been largely underwritten by hedge fund manager Paul Singer and other investors.

About 40 states have established funds to clean up thousands of storage tanks leaking below gas stations. Many were installed in the 1950s or earlier. When they corroded, the gasoline and diesel they leaked became a serious threat to underground drinking water supplies all over the country.

Oklahoma’s fund gets money from a penny-a-gallon gasoline tax. Oklahoma is one of several states that have alleged that Phillips, BP and other oil companies double-dipped.