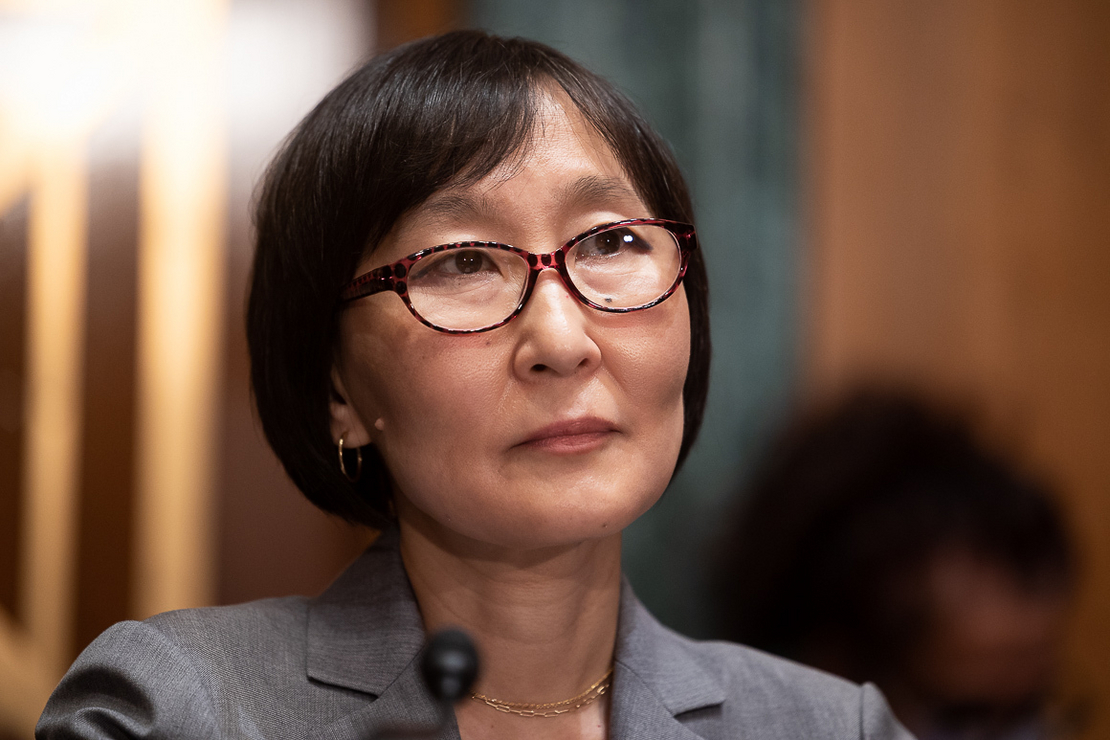 Saule Omarova, nominee to lead the Office of the Comptroller of the Currency, during her confirmation hearing yesterday. Francis Chung/E&E News

President Biden’s pick to be the nation’s top bank regulator faces a precarious confirmation path after a hearing yesterday that was marked by partisan clashes over her academic writings, position on fossil fuel financing and upbringing in the Soviet Union.

Saule Omarova, Biden’s nominee to become comptroller of the currency, was met with a litany of criticisms from Republican lawmakers over what they see as her radical ideas about banking policy and regulation.

But they weren’t the only ones who raised concerns in the hearing by the Senate Committee on Banking, Housing and Urban Affairs. Sens. Jon Tester (D-Mont.) and Mark Warner (D-Va.) — two moderates whose support is needed to confirm Omarova — signaled hesitation regarding her past positions.

“I will tell you I have been disappointed by comments criticizing where the nominee was born, where she grew up, what her education was, going after heritage. I think we really need to focus on her ideas, and there should be no place for that,” said Tester.

“I do, however, have serious concerns with positions you have taken,” Tester added, “including as a witness before this banking committee related to our financial system, bank regulation and on legislation" related to the Office of the Comptroller of the Currency, or OCC.

The hearing comes nearly two months after Biden first announced he would tap the Cornell University law professor to lead the OCC. Omarova formerly served as a special adviser at the Treasury Department during the George W. Bush administration, and as an attorney at the New York law firm Davis Polk & Wardwell. Originally born in Kazakhstan, a former Soviet republic, Omarova would be the first woman and person of color to fill the role.

But Biden’s decision sparked an uncharacteristically controversial campaign by the banking industry and Republican lawmakers to thwart the nomination.

The weeks following the announcement brought a flurry of public statements, op-eds and press releases about the nominee’s “radical” policy ideas that would fundamentally overhaul the banking system, as well as her critiques of major finance firms (Climatewire, Oct. 4).

Others, including Sen. Pat Toomey (R-Pa.), the Banking Committee’s ranking member, zeroed in on Omarova’s heritage. In a speech on the Senate floor last month, Toomey referenced several of Omarova’s past writings that he found particularly outlandish — and connected them to her being born, raised and educated in the Soviet Union.

Among the proposals he took issue with was a paper Omarova co-wrote arguing that Congress should create a new federal entity, dubbed the National Investment Authority, that would finance projects to support “socially inclusive and sustainable economic growth.”

He also cited a paper Omarova wrote in October 2020 that proposed “ending banking as we know it” by shifting American’s bank deposit accounts from private lenders to the Federal Reserve.

“Where would a person even come up with these ideas? How does it even happen that it occurs to someone to think of these things?” Toomey said. “Maybe a contributing factor could be if a person grew up in the former Soviet Union and went to Moscow State University and attended on a V.I. Lenin academic scholarship.”

Omarova and her supporters say her past ideas are not relevant to the job she’s been tapped for, and in some cases were academic thought experiments meant to push the envelope of what’s possible in U.S. financial regulation.

“I do not want to end banking as we know it. I believe that our banking system is the best banking system in the world, although it could do better,” Omarova said yesterday.

Sen. Elizabeth Warren (D-Mass.) said the criticisms by Republicans and the banking industry are an effort to hide their real concern: that Omarova would be willing to crack down on Wall Street giants to shield the U.S. financial system from risky behavior.

“This is a vicious smear campaign coordinated by Republicans who are doing the bidding of giant banks that want to keep gobbling up smaller competitors, want to keep ripping off their customers and want to keep getting away with it,” Warren said. “Wall Street feels threatened, so they have launched an ugly personal assault on a respected person who never sought the spotlight.”

Ultimately, Omarova’s confirmation will hinge on Tester, Warner and other wavering Democrats.

High on Tester and Warner’s list of concerns: that Omarova took issue with a bipartisan banking bill they helped write and pass in 2018. The Economic Growth, Regulatory Relief and Consumer Protection Act aimed to ease regulatory burdens for primarily small and regional firms, but Omarova had raised the idea that it could also loosen regulatory requirements for major firms.

“I very much disagree with your characterization of that bill,” said Warner, who noted that 69 senators supported the legislation.

Tester, for his part, highlighted another key concern that was also raised repeatedly by Republican committee members.

The criticism hinged on Omarova’s statement during an online event in February that the bankruptcy of coal, oil and gas companies would be good for the fight against climate change. They also cited her remarks during a roundtable in May, when she said the way to get rid of fossil fuel financiers is to “starve them of their sources of capital.”

Tester and others slammed the comments on the grounds that it would be inappropriate for banking regulators to use their authorities to limit legal yet politically controversial industries’ access to financial services.

The video clips show a narrow segment of her remarks and omit other comments that offer context about her ideas. Both events focused broadly on the paper she co-wrote about the National Investment Authority, or NIA, rather than banking regulation or the OCC in particular.

During the February webinar, for example, Omarova argued that the NIA could play a key role in helping bankrupt businesses, such as beleaguered coal, oil and gas companies, restructure amid economic transitions.

“A lot of the smaller players in that industry are going to probably go bankrupt in short order, and we want them to go bankrupt if we want to tackle climate change, right,” Omarova said.

“But that creates a lot of this sort of loss of jobs, a lot of displacement, and economic fallback that we cannot afford really,” she added. “So [the NIA] could actually become the kind of equity investor at that point, taking over management of those companies and basically leading them through restructuring to a new technological basis.”

Omarova acknowledged during yesterday’s hearing that she had poorly phrased her comment about bankrupting fossil energy companies, and repeatedly said the oil and gas industry is an important part of the American economy. She also rejected lawmakers’ concerns that she would use the power of the Office of the Comptroller of the Currency to curb fossil fuel financing.

But she didn’t back down from her concerns about rising temperatures. “As a human being, as a person, as a mother, I want my child to live in a world that doesn’t suffer from hurricanes of unusual propositions, from fires that devastate farms,” Omarova said.

The majority of lawmakers focused on Omarova’s academic writing, proposals and remarks.

The criticisms made by Republican members during the hearing were “based solely” on those factors, said Sen. Tim Scott (R-S.C.).

But not long after that, Sen. John Kennedy (R-La.) changed tack. He pressed Omarova about her membership in a youth communist organization while she was a student, an undergraduate paper she wrote on communism, as well as her open criticism of the financial services industry.

“You have a right to believe every one of these things. You do; this is America,” Kennedy said. “But, I don’t mean any disrespect, I don’t know whether to call you professor or comrade.”

Omarova responded by highlighting the lack of freedom — academic and otherwise — that exists within totalitarian regimes, her total rejection of communist ideology and her pride in being an American citizen.

"There is no record of me ever actually participating in any Marxist or communist discussions of any kind,” Omarova said.

“My family suffered under the communist regime. I grew up without knowing half of my family; my grandmother herself escaped death twice under the Stalin regime," she added. "This is what’s seared in my mind. That’s who I am.”