Profile of a climate voter under Trump: Young and female 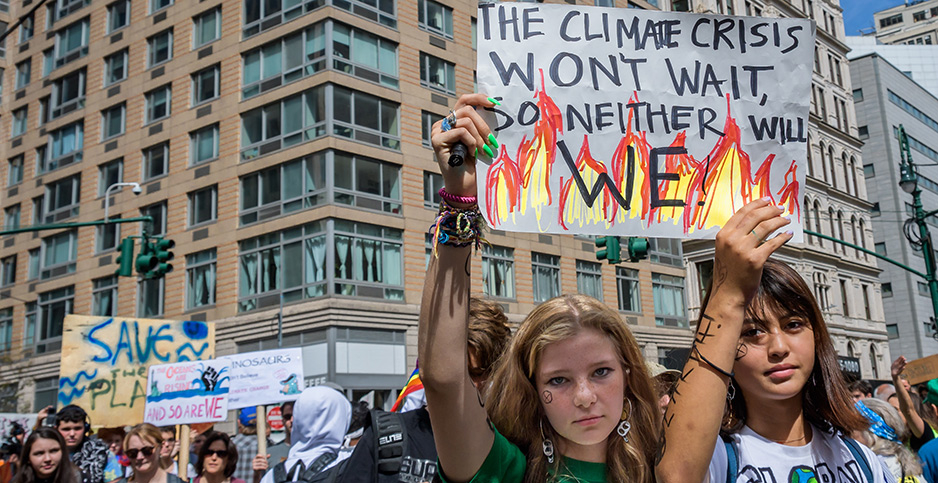 Greta Thunberg may be the face of the global climate movement, but the 16-year-old from Sweden has plenty of girls and women to back her up.

Several recent surveys have found that women — particularly those under the age of 34 — are leading the charge against global warming.

Thunberg represents that trend. So does Rep. Alexandria Ocasio-Cortez (D-N.Y.) and Varshini Prakash, the 26-year-old director of the Sunrise Movement.

And those are just the boldfaced names.

Recent research from the University of Maryland found that young women were the driving force behind the U.S. component of last month’s global climate strike. The clearest evidence of that trend: U.S. organizers were more than twice as likely to be female, according to Dana Fisher, a University of Maryland sociology professor.

Fisher said in a phone interview that many of the organizers had experience in other movements, notably efforts against gun violence and in the 2017 Women’s March.

"It was the spark that ignited the resistance," said Fisher of the 2017 Women’s March, which took place the day after the inauguration of President Trump. "Culturally, we are in a moment where women have woken up, and I think they did so in response to the Trump campaign of 2016."

That goes for climate, too.

Fisher’s research revealed that female activists made up the majority of protesters at the Washington, D.C., climate strike. Women and girls constituted 58% of that action — far more than the 32% of men and boys, or the 10% of activists who identified as transgender or gender nonconforming.

"It originated with and continues to be about women’s empowerment," said Fisher, author of the upcoming book "American Resistance: From the Women’s March to the Blue Wave."

Other research has picked up on the trend.

A poll conducted this summer by Quinnipiac University found a split between men and women on the issue of climate change. In that survey, 70% of women said the United States needed to do more to address climate change; 64% of men felt the same way. Similarly, 61% of women viewed climate change as an emergency compared with 52% of men.

Mary Snow, a polling analyst with Quinnipiac, noted that the gap between men and women was larger last year. A Quinnipiac poll from August 2018 found that 70% of women thought the United States needed to do more to address global warming — the same percentage as its August 2019 findings.

That’s because more men have come around to the idea. A year ago, 58% of men agreed that the United States needed to do more. Now it’s 6 percentage points higher, at 64% of men.

Snow said she didn’t have an explanation for why the gap narrowed, but she said the attitudes of young voters are the real takeaway of the Quinnipiac poll and others like it.

"Young people are the standout in these polls," Snow said. "The younger generation feels this will be their issue in their lifetime."

David Flaherty, a Colorado pollster and CEO of Magellan Strategies, attributed the gender split on issues like climate change to the traditional division between men and women on party preference — with women leaning more toward Democratic candidates in recent years than men.

It’s why, when politicians such as Ocasio-Cortez or Sen. Bernie Sanders (I-Vt.) talk about climate change, they’re more likely to get a receptive audience from the traditional Democratic base, Flaherty said. That’s especially true among liberal millennials and the generation after them, he said.

"That message is getting received loud and clear from younger voters," said Flaherty, who used to work for the Republican National Committee. Climate change is a "key issue to appeal to Democratic primary voters on."

It’s a significant political development, because millennials and the next generation are expected in 2020 to comprise the largest proportion of registered voters.

What’s also notable is that polling has shown that younger Republicans are more concerned about climate change than their older counterparts.

"Further, the gap between Republican and Democratic views on global warming is smaller for Millennials than for older generations, indicating that there is less political polarization over this issue among younger Americans," noted the authors.

Analysts with the Pew Research Center found similar results with their polling.

They also noted a slight gap between men and women on the issue of climate change, with 46% of women describing it as a top priority, compared with 42% of men. But overall, they found a rapid spike in the number of Americans who view it as a significant issue.

One of those who have taken action on climate change is Madison Britting, a pre-med student at the University of Connecticut.

Britting joined in the climate strike last month and has worked as a volunteer for the League of Conservation Voters.

Climate change is the "one issue that absolutely affects every single person on this planet — and there aren’t too many issues you can say that about," she said.

"We’re going to have to live with these effects," added Britting, 20. "Maybe we weren’t the ones who caused it, but now it’s our responsibility."