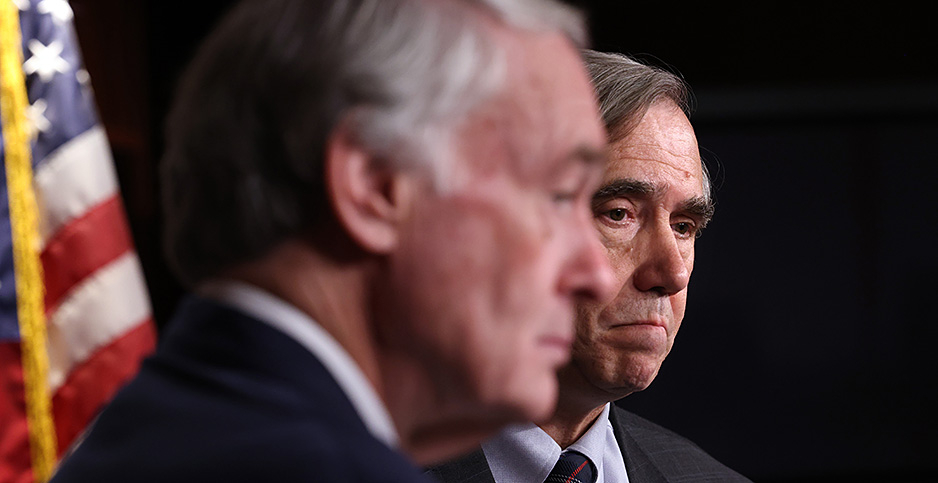 Progressives yesterday escalated their bid to include climate change in an infrastructure package, further imperiling ongoing talks between the White House and a bipartisan group of 10 senators.

Several prominent progressives and climate hawks said they would not support bipartisan infrastructure legislation without assurances that significant climate change provisions would be included in a package passed through budget reconciliation, the limited tool Democrats have to skirt the Senate filibuster.

Others, including Senate Budget Chairman Bernie Sanders (I-Vt.), are increasingly skeptical of that kind of two-track approach, dismissing Republicans as unserious and pointing to broad obstinacy from Senate Minority Leader Mitch McConnell (R-Ky.).

"Our Republican colleagues are running the same playbook against climate action that they did against Waxman-Markey 12 years ago: dither, delay, deny," Sen. Ed Markey (D-Mass.) told reporters yesterday, referring to the failed cap-and-trade bill of 2009.

Democrats can afford to lose few votes with close divides in both chambers, and even a small group of progressives could tank any potential deal. It could reach a boiling point in the coming days as more details emerge about the bipartisan proposal.

Markey and Sen. Jeff Merkley (D-Ore.) ramped up the pressure with a news conference yesterday in which they said Congress should pass an infrastructure and climate deal by the August recess, or stay in town if it’s not wrapped up.

"We need to move forward with 50 Democratic votes now that the Republicans have shown us they are not serious about creating clean energy jobs, jump-starting a clean energy revolution or adding the standards and investments we need to attack this crisis," Markey said.

To support a deal with the group of 10, Merkley said he would need to have 50 votes for a reconciliation vote in hand before the bipartisan bill "ever goes to the floor."

"We’re telling you today we’re going to get this deal," Merkley said. "We cannot let the American people down, and we cannot let our planet down. This has to be part of the deal."

Progressives around Capitol Hill echoed that message yesterday, with several saying they need hard assurances from leadership on climate to move forward with any kind of bipartisanship.

"I am hopeful, but a lot depends on the White House," Rep. Ro Khanna (D-Calif.) said in an interview. "I’m hopeful that we’re conveying to them that the votes won’t be there in the House if climate is not part of it."

Rep. Alexandria Ocasio-Cortez (D-N.Y.) said one option would be to have the Senate pass both a bipartisan deal and a separate infrastructure reconciliation package with climate instructions before the House would take up either.

"It’s not good enough for us to just have someone’s word that something may be coming later in the budget package. It’s either going to happen and we know 100% for sure that it’s going to happen, or it’s not going to happen," Ocasio-Cortez (D-N.Y.) said in an interview.

Rep. Debbie Dingell (D-Mich.), however, drew an even harder red line, saying she "will not vote for anything that does not include electric vehicles."

"We are going to go to electric because we are already behind in the world, and I will be damned if I’m going to let any other country get ahead of us in automotive innovation and technology," Dingell told reporters.

In the Senate, Sanders reiterated his preference for moving President Biden’s twin infrastructure proposals through a single reconciliation package, citing in part the mounting risks of climate change.

Sanders also said he "absolutely" opposes any increase in the federal gas tax as an infrastructure pay-for.

The White House is nonetheless allowing bipartisan talks to move ahead at least a week more, and congressional leaders seem content to follow its lead.

If a deal doesn’t materialize in that time, "then we move along with reconciliation — for everything."

Yarmuth said House Democrats are already proceeding under the assumption that a bipartisan agreement won’t materialize and they’ll have to use reconciliation to advance Biden’s agenda along party lines.

He said his committee will mark up a budget resolution with reconciliation instructions that cover the entirety of Biden’s American Jobs Plan and American Families Plan, including "social" infrastructure and climate. That would set the stage for a partisan reconciliation bill.

Should a bipartisan deal emerge, "we just take that part out of the instructions," Yarmuth said.

Yarmuth anticipated a Budget Committee markup of the reconciliation instructions in mid-July, with a floor vote on the resulting package before the August recess, although he conceded that schedule could slip into the fall if a bipartisan infrastructure deal emerges.

The budget process is moving at a similar pace on the Senate side, where Majority Leader Chuck Schumer (D-N.Y.) said he will meet today with Sanders and the rest of the Budget panel about the fiscal 2022 resolution that will outline the reconciliation process.

Schumer reiterated his call for a two-track process on infrastructure, but he also acknowledged the bubbling concerns in his caucus.

"I think there are large numbers of people in our caucus — and I sympathize with this — who will not vote for a bipartisan bill unless they’re quite certain what’s going to be in reconciliation," Schumer told reporters.

Meanwhile, details continued to emerge yesterday about the bipartisan proposal from the "G-10" group of senators.

Sen. Susan Collins (R-Maine) said the proposal, which would offer $579 billion in new spending over five years, would have several pay-fors. They include repurposing more than $100 million in unused COVID-19 funds, indexing the gas tax to inflation, and establishing a miles-traveled tax or other assessment for owners of electric vehicles.

Collins added that there would be no tax rebates offered for EVs, and she said Biden’s proposal for a nationwide network of charging stations would be scaled backed — although not eliminated — with some money going toward electric buses.

Sen. Lisa Murkowski (R-Alaska) said she and the four GOP members of the group briefed the Republican caucus yesterday during the weekly lunch.

The questions "were primarily about the pay-fors, which we expected," she told E&E News yesterday.

Murkowski said she was unconcerned by the fact that any bipartisan deal may well be followed by a partisan reconciliation package that includes policies she opposes.

"If we’re able to do this proposal that we’re laying down now, I’ll feel good about the fact that we’ve identified an infrastructure package that Republicans and Democrats agree is in this zone of what we’re all talking about," Murkowski said.

The outcome ultimately depends heavily on McConnell, who will largely control whether Republicans support a bipartisan proposal.

Despite his past statement that "100%" of his focus is on stopping the Biden administration, McConnell said yesterday he would "love to see us get an outcome on infrastructure."

"We’re anticipating, at some point, getting a reconciliation bill," McConnell told reporters. "I guess what we’ll find out soon is whether there is an additional bipartisan effort to address a subject that a lot of us would like to address."