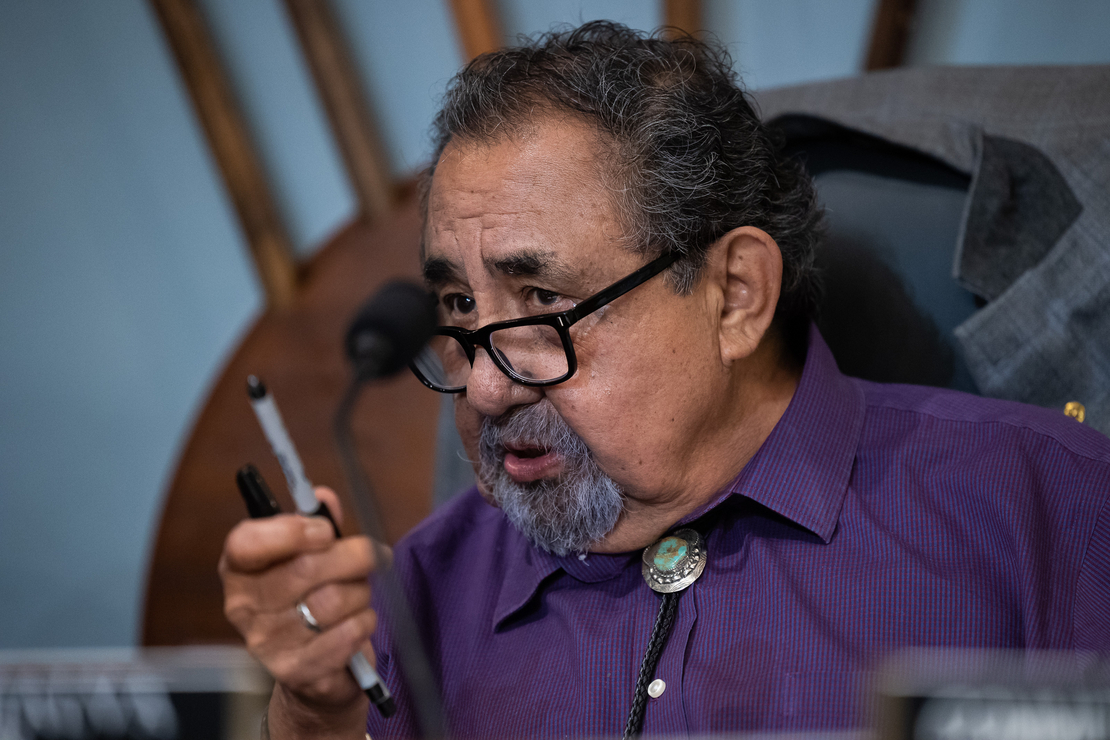 A top House Democrat will vote to block consideration of a must-pass defense spending bill if it includes permitting language that could undermine environmental protections.

His threat also illustrates the intensity of the continued left-wing opposition to the provision, which party leaders first sought to tack onto a stopgap spending bill in September at the behest of Grijalva’s counterpart, Senate Energy and Natural Resources Chair Joe Manchin (D-W.Va.).

“It’s gotten to the point where it has become craven, where ‘we’re just going to get it done regardless,’” Grijalva told E&E News on Monday of leadership’s insistence on finding a home for Manchin’s overhaul effort.

“I understand, and I’ve tried to give to senators the reassurance that the transmission and grid issues — the promotion of renewable and alternative energies — have to be dealt with, but not like this,” he continued. “Taking a hatchet to [the National Environmental Policy Act] is not the way to go.”

Grijalva’s plan would be to vote against the “rule” for the bill. That’s a resolution that governs parameters for floor debate.

Members of the majority rarely oppose rules for bills backed by party leaders. And if enough Democrats band together to oppose the rule for the NDAA, it could thwart the underlying bill.

Grijalva said he wasn’t launching a coordinated effort to sink the rule at this time, but the Arizona Democrat has enormous influence among House progressives and environmentalists, and he led the opposition to the permitting language earlier this year. His plans could compel others to follow suit.

Leaders of the Congressional Progressive Caucus are already surveying their members to see if there’s an appetite to vote against the NDAA rule in case permitting reform text is included, a House Democratic aide confirmed to E&E News.

At least one progressive House Democrat, Rep. Ro Khanna of California, said Monday he planned to vote against the rule “if it includes giveaways to the fossil fuel industry.”

“We all have a stake in tackling the climate crisis & it’s critical we listen to communities hit hardest,” Khanna said on Twitter, adding, “If even 10 House progressives vote against [the rule], it likely can’t pass.”

No decisions have been made yet about including permitting language in the NDAA, which could shorten timelines for National Environmental Policy Act reviews, limit the ability for citizens to launch judicial challenges for proposed energy projects and approve the controversial Mountain Valley pipeline — a Manchin priority.

But as NDAA negotiations continue, House Democratic chiefs of staff were told Monday during their weekly meeting that their party leadership is “discussing permitting in the context of NDAA,” according to one chief on the call granted anonymity to share details of a private briefing.

Progressives are on “high alert,” said Rep. Jared Huffman (D-Calif.), chair of the House Natural Resources Subcommittee on Water, Oceans and Wildlife, adding he expected agreed-on language would go further in peeling back environmental regulation than the initial draft Manchin rolled out in September.

“He’s trying to get Republican votes,” Huffman said of Manchin. “You don’t get that by tackling the climate crisis.”

Democratic leaders are also weighing the permitting language against the backdrop of efforts by House progressives and environmental activists to secure a House floor vote before the year’s end on the “Environmental Justice for All Act,” H.R. 2021.

A vote on the bill, advocates say, would honor the memory of Donald McEachin, a Democratic congressman from Virginia who died suddenly last week of complications from colorectal cancer and was a driving force behind the legislation alongside Grijalva.

McEachin also joined Grijalva as one of the most vocal opponents of Manchin’s permitting provision earlier this year, at one point calling it “an insult of the highest order” for his party’s leadership to rally around a proposal that would essentially render the “EJ for All Act” moot.

The environmental justice legislation would vastly expand the power of certain vulnerable communities to reject projects that can spike local rates of cancer and respiratory disease and cause long-term pollution.

Grijalva told E&E News on Monday that conversations about whether to vote on the “EJ for All Act” continued, but he conceded he was now viewing those discussions with some unease.

The chair feared, he said, a scenario where leadership would offer a “trade” in which advocates would get a vote on the environmental justice bill while also having to swallow the permitting overhaul in the NDAA.

Representatives from several environmental justice groups met with staff for House Speaker Nancy Pelosi (D-Calif.) last week, and many left Capitol Hill with that same sense of foreboding, said one attendee of the meeting granted anonymity to speak candidly.

Grijalva said he has already told leadership the “EJ for All Act” should be brought to the floor under three specific parameters.

One is that only approved changes could be made to the “cumulative impacts” portion of the bill.

That title of the legislation, perhaps the most polarizing even among Democrats, would require permitting decisions under the Clean Water Act and Clean Air Act to account for the cumulative effects of harmful emissions.

The second condition is that the bill be renamed for McEachin, and the third is that the measure isn’t considered alongside permitting reforms.

“I don’t know where those discussions are at this point,” Grijalva said, “but if I feel that ‘EJ for All’ and the work that everybody has done on that — including our dearly departed friend, Mr. McEachin — is becoming a prop or a justification for a permitting deal, then I would ask that we not vote on it.”

Such a paired vote, Grijalva added, would be “the worst insult,” but he cautioned that even forcing members to vote against the NDAA bill with permitting language included all on its own would be a blow to McEachin’s legacy.

Timing could actually be such that members vote on the NDAA on Wednesday, the same day as McEachin’s funeral.

“It would be counter to everything he believed in and counter to the values he respected,” Grijalva said.