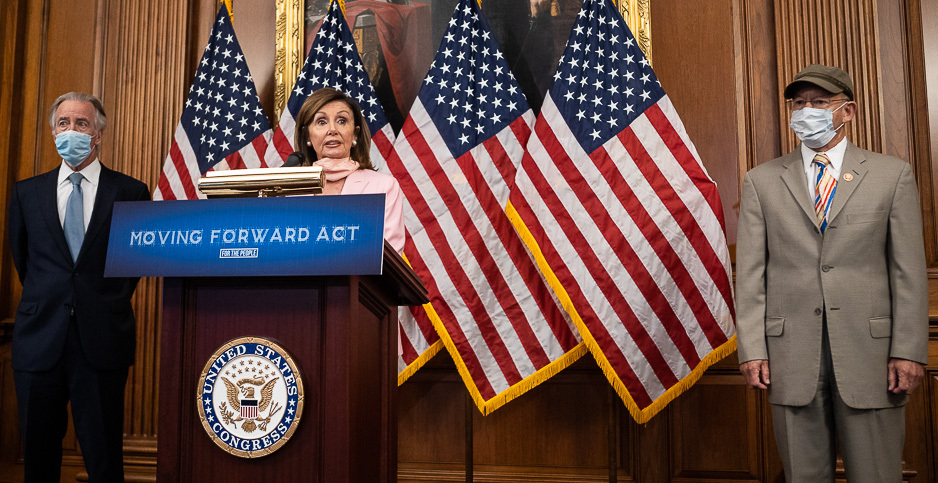 House Democrats yesterday unveiled the details of a massive $1.5 trillion infrastructure package that has several sections focused on energy and environmental priorities.

H.R. 2 and its 2,309 pages of provisions may become the most significant action taken by the House to promote a clean energy and climate-focused economic transformation this Congress.

The package may also provide a tax and spending reauthorization lifeline to renewable and energy efficiency businesses that have had to lay off some 620,000 workers during the past three months in the face of a coronavirus pandemic slowdown.

"There is no better way to jumpstart our economy and advance our country’s momentum toward a green future than to modernize our badly aging infrastructure," Energy and Commerce Chairman Frank Pallone (D-N.J.) said in a statement.

In addition to infrastructure measures moved by the Transportation and Infrastructure Committee as part of its highway reauthorization effort, the legislation draws heavily from a pair of Energy and Commerce Committee infrastructure efforts, including the "Leading Infrastructure for Tomorrow’s America Act," H.R. 2741, and the draft climate measure pending before the panel.

Also central to that effort, the bill would extend and expand a host of tax credits, including five-year extensions for wind and solar tax credits and a two-year extension for carbon capture and sequestration projects, among other efficiency-related tinkerings, according to a summary.

While House Democrats are likely to support the bill, its prospects in the Senate are not so certain. Republicans have already begun to take aim at the bill as a revised Green New Deal framework for infrastructure — political rhetoric sure to hang over next week’s floor considerations.

House leadership has vowed to pass the bill before the July Fourth holiday. Before that happens, here’s a list of other odds and ends that emerged from the released legislative language yesterday:

Among the bill’s biggest winners outside the transportation sphere is energy efficiency. Often touted as the "low-hanging fruit" of climate policies, it plays a central role in the legislation.

The clean energy tax component, unveiled yesterday, would extend through 2025 an assortment of key energy savings incentives that have lapsed.

In addition to the extensions, the bill includes tweaks sought by industry and advocates to modernize the popular tax breaks for homeowners and businesses (Greenwire, Oct. 2, 2019).

The bill contains a smorgasbord of efficiency provisions from Democrats on the Energy and Commerce Committee to promote energy savings in homes and commercial buildings.

These include the creation of an Energy Department home energy savings rebate program, billions of dollars for weatherization programs, and grants to improve the energy efficiency of public schools.

Rep. Paul Tonko (D-N.Y.), who chairs the Energy and Commerce Subcommittee on Environment and Climate Change, said the bill would invest more than $27 billion for building retrofits.

"With this package, we have a tremendous opportunity to put Americans back to work in the short-term while modernizing our infrastructure to achieve a cleaner, more resilient, more competitive, and more just economy overall," Tonko said in a statement noting that the sweeping infrastructure plan should set the stage for "America’s clean recovery."

The Alliance to Save Energy welcomed the efficiency provisions. "The energy efficiency sector has lost nearly 432,000 jobs as a direct result of the pandemic — more than any other clean energy industry," Ben Evans, the group’s vice president of public affairs, said in an email yesterday.

"This bill — incorporating bipartisan, bicameral ideas on efficiency incentives — is a great step forward and would go a long way toward stimulating demand for energy efficiency and putting thousands of laid off employees back to work."

The bill would take aim at the nation’s natural gas infrastructure to ensure that current modes of gas transportation — be they shipments of liquefied natural gas by rail or the pipeline distribution of gas into homes — meet safety and climate standards.

Moving LNG by rail has long been seen as a problem by Transportation and Infrastructure Chairman Peter DeFazio (D-Ore.), and the bill would block the implementation of a series of LNG-by-rail permits issued by the Department of Transportation until the agency better studies the safety impacts of such movement.

DeFazio has sought multiple times to attach such a provision to previous spending and infrastructure authorization bills, and GOP efforts to remove the study in the highway bill failed during last week’s markup.

He called on the Senate to adopt the provision after the Transportation Department finalized the LNG-by-rail rule Friday.

"Of all the ways the Trump administration seeks to put profits over people, this action is one of the most reckless yet," DeFazio said in a statement.

"Should even one LNG tank car get punctured, the results could be far more devastating than most freight train disasters we’ve seen, yet this administration still fast-tracked a plan to move LNG by rail tank car through populated areas with a sham process whose outcome was a forgone conclusion."

Attached with the study mandate, the bill would authorize DOT’s Pipeline and Hazardous Materials Safety Administration’s hazardous materials safety program at $347 million over five years. The entire agency’s authorization expired at the end of the last fiscal year.

The bill would also establish a state grant program through the Department of Energy that would fund improvements and retrofits to enhance performance of the natural gas distribution programs.

With an authorization of $250 million annually through fiscal 2025, the provision would help limit the release of methane, a potent greenhouse gas, from distribution pipelines, DeFazio said last week.

House Democrats attached a provision to the bill that would look to introduce additional dam and hydropower safety inspections and analysis to the Federal Energy Regulatory Commission permitting process.

The provision appears inspired by the recent failure at the Edenville Dam in Michigan, where some 2,000 homes were affected by the rupture and spillway failure in May (Greenwire, May 20).

Energy and Commerce Committee members launched a bipartisan probe into the dam failure, with an eye on applying lessons learned to prevent future ruptures (Greenwire, June 1).

The bill would require additional FERC checks on the safety of dam licenses as well as financial viability checks for the companies holding the licenses to ensure safety protections will remain in place during the dam’s operations.

It would also require additional communication between FERC and Congress to ensure regular updates on the progress of its independent investigation into the Edenville Dam. That also includes the requirement for a technical conference with state participation about dam safety.

House Democrats included various provisions that would boost drinking water protections and infrastructure, harden water systems against the threat of climate change, and provide a financial lifeline for tribal water and wastewater systems.

They include billions of dollars in grants for implementing water quality improvement programs and money for municipalities to address climate change by hardening watersheds and boosting resilience.

Also included is language to authorize money for critical regional programs — from the Chesapeake Bay to the Great Lakes.

The bill would reauthorize $455 million for EPA’s Chesapeake Bay Program Office for fiscal 2021 through fiscal 2025.

Restoration programs for the San Francisco Bay and Puget Sound in Washington state are also included, as is language for more than $2 billion for EPA’s Great Lakes Restoration Initiative for fiscal 2022 through fiscal 2025.

Yet another provision would extend a reclamation water settlement fund to provide $120 million annually for clean water and wastewater infrastructure across Indian Country.

According to the bill, Native American households are 19 times more likely than white households to lack running water and indoor plumbing due to lagging infrastructure, and 280 tribes across the West need a long-term financial solution.

The bill would also tackle historic droughts in the West by providing about $3.5 billion for Western water infrastructure and drought resilience measures.

Despite House Democrats’ including such water provisions, DeFazio is working separately on text of the Water Resources Development Act reauthorization, which he expects to release in July.

The House-passed "Health and Economic Recovery Omnibus Emergency Solutions Act," in response to the pandemic, also includes water provisions (E&E Daily, May 29). One for the infrastructure package is to roll parts into a future COVID-19 response measure.

In addition to grid and water policies, the package contains an entire title dedicated to the promotion, protection and use of public lands, Democrats said.

The bill would seek to boost wind and solar energy projects on public lands in part by enabling the Interior Department to issue permits more quickly and efficiently.

It would allow local governments to recoup some revenue from renewable energy projects occurring in their own communities and put that money toward conservation and recreation initiatives.

Interior would also be responsible for administering a new $25 million-a-year grant program to help colleges and labor unions train people for jobs in the offshore wind energy sector.

In regard to public land preservation, the bill would create a National Wildlife Corridors System to protect "certain native fish, wildlife and plant species" on federal lands, along with a voluntary grant program for the "restoration, maintenance and preservation of wildlife corridors on state and private lands."

The measure would guarantee funding for the expansion of green spaces and "recreational infrastructure" for underserved communities that tend not to have access to parks, particularly those in more urban areas.

It also would direct the Forest Service to prioritize maintenance projects to ensure the long-term safety of roads, bridges and trails under the agency’s preview.

Meanwhile, House Speaker Nancy Pelosi (D-Calif.) has found a place for a long-sought home district priority: updating existing borrowing authority to do maintenance and repairs at the Presidio of San Francisco.

The infrastructure package would reauthorize the Abandoned Mine Land Reclamation Fund through 2037. The fund, which pays for cleaning up thousands of coal mines abandoned before 1977, is set to expire next year.

Lawmakers reduced the fee operators pay into the fund in 2006 to the current rates of 28 cents per ton of coal produced at surface mines and 12 cents per ton at underground mines.

Republican Sens. John Barrasso and Mike Enzi of Wyoming, the nation’s top coal-mining state, threw a lifeline to struggling coal companies last week when they pitched their vision for the future of the AML fund. They propose extending the program until 2028 and further cutting the fee by 35% (E&E Daily, June 18).

Democrats also included in the package the "Revitalizing the Economy of Coal Communities by Leveraging Local Activities and Investing More Act," H.R. 2156, spearheaded by Rep. Matt Cartwright (D-Pa.). That bill would fast-track spending on mine cleanup projects that prioritize economic development.