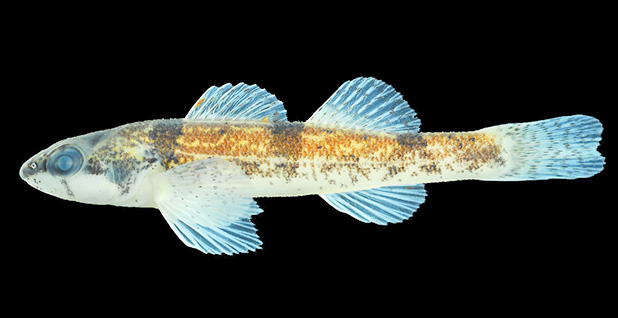 The Fish and Wildlife Service has proposed listing the trispot darter as threatened under the Endangered Species Act. Pat O'Neil/Geological Survey of Alabama

Some tiny Southern fish and the lumbering grizzly bear are dramatizing divergent sides of the debate over adding and removing animals from Endangered Species Act protections.

Kicking off a series of long-awaited decisions, the Fish and Wildlife Service today proposed listing the trispot darter as threatened under the ESA. Less than 2 inches long, the fish lives in the Coosa River basin spanning parts of Tennessee, Georgia and Alabama.

"The condition of the trispot darter is an indicator that habitat conditions, stream flows and water quality are declining in the Coosa River Basin," Mike Oetker, the service’s acting Southeast regional director, said in a statement.

Oetker, a career FWS employee, added that "the good news is that we believe we can reverse those declines and recover the trispot."

Separately, administration officials are proposing that the candy darter found in Virginia and West Virginia also be listed as threatened.

"The candy darter has been called one of our country’s most vivid freshwater fish, and all signs suggest its future is threatened," Paul Phifer, FWS Northeast assistant regional director, said in a statement.

The populations of two other species, the holiday darter and the bridled darter, were deemed stable enough to not need ESA protections.

The decisions announced today come as part of what officials termed a "massive settlement agreement" requiring the agency to review the status of more than 400 species. More announcements are imminent.

While the administration is moving to protect tiny fish, in June the Interior Department announced it would remove Yellowstone-area grizzly bears from ESA protections. The move has already prompted litigation, and now it has Congress involved (E&E News PM, June 22).

Arizona Rep. Raúl Grijalva, the top Democrat on the House Natural Resources Committee, has introduced a bill, H.R. 3894, aimed at enhancing protections for grizzlies and giving American Indian tribes a stronger voice in their management. It would make it against the law for anyone to kill, injure, capture or transport the bears, with some exceptions.

The legislation would not apply to grizzly bears taken in Alaska. And it would permit the killing of grizzlies to save the life of a person in immediate danger, among other exceptions.

The bill would also require officials to consult with affected tribes and the Interagency Grizzly Bear Study Team before taking any action that negatively affects the bear’s habitat or results in a higher mortality rate among the species.

"Like a bear snatching salmon from a stream, Trump’s Interior Department has snatched defeat from the jaws of victory by delisting Yellowstone grizzlies prematurely and without adequate tribal consultation or safeguards to ensure the bears’ long-term survival," Grijalva said in June.

Grijalva is holding a news conference on the bill this afternoon on Capitol Hill with several tribal leaders and the Humane Society. They have accused the administration of ignoring "the objections of scientists and tribal leaders" in the delisting.

It was the Obama administration, though, that in 2016 initiated the delisting process, with the Fish and Wildlife Service announcing at that time it intended to remove the Yellowstone grizzlies from the endangered species list (E&E News PM, March 3, 2016).

The moves on the darter fish are not without controversy. The public will get its chance to weigh in when Fish and Wildlife tomorrow formally publishes the proposals in the Federal Register and opens a comment period.

As with the grizzly, it continues a debate that’s been going on for years. Way back in 1982, FWS identified the trispot darter as a species that might be added to the ESA list.

In 1991, it became a candidate species. In 2010, the Center for Biological Diversity petitioned for it and 403 other aquatic animals to be listed.

Scientists have identified habitat degradation as the largest threat to the future viability of the darters, specifying problems including both the quality and the quantity of water available.

"All of these factors are exacerbated by the effects of climate change," FWS has said.

"At the end of 25 years, the candy darter will likely occur in four isolated populations and maintain little resilience, redundancy, or representation," the agency said.

FWS did not specify a critical habitat for either the trispot darter or the candy darter.