Proterra CEO wants to overthrow the diesel bus, not the driver 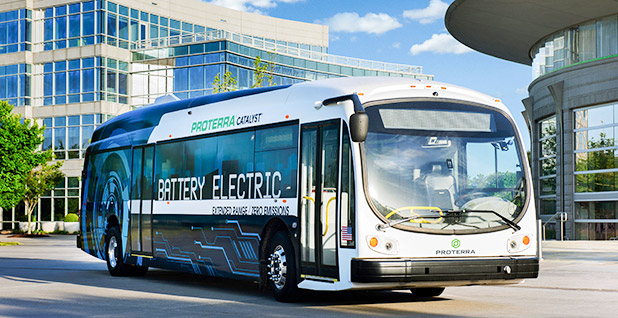 Electric bus maker Proterra Inc. last week won a contract to sell 20 of its Catalyst buses to the Chicago Transit Authority and announced its entry into the Canadian market with an order for 10 buses from the Toronto Transit Commission. Proterra

On Tuesday, the company took its first steps north of the border when Toronto’s transit agency approved its first battery-electric bus fleet with a purchase of 10 Proterra buses. A day later, the Chicago Transit Authority announced that Proterra won a $32 million contract for 20 of the company’s Catalyst buses, the first of which will be delivered later this year.

Popple spoke with Energywire last week to discuss the outlook for the company and the electric bus industry.

You were quoted recently saying the city bus sector could transition from diesel to electric within the next decade. What is the key to getting there, and what is the biggest barrier?

The price of oil certainly has an impact. We’re in an oil price environment right now that is high enough and volatile enough that it’s actually going to accelerate the electrification of a lot of sectors. Transit bus fleets in some parts of the country are now paying $1 per mile for fuel because their buses only get 4 miles to the gallon, so even minor fluctuations in oil pricing have a tremendous impact on the viability of mass transit and a lot of other high-mileage sectors like freight and airlines.

I don’t think we need any further breakthroughs in battery technology, so we see the lithium-ion battery industry scaling up pretty well to keep up with the demand for the EV sector. Policy can certainly make this go faster, I don’t necessarily see policy slowing it down.

Are utilities prepared to accommodate that extra charging in terms of infrastructure?

Most of the utilities that we’ve operated with are quite progressive in terms of supporting transport electrification. Sometimes at the working level there are people with the utility that don’t understand the strategic urgency from an environmental or an economic perspective of supporting the electrification of vehicles, but it doesn’t take long for senior management at most utilities to kind of wake up and see the opportunity, and then support and align resources. So it’s generally been very productive in terms of our ability to work with utilities.

It is at the state of California, and it is the Innovative Clean Transit rule, the ICT. That is headed to the California Air Resources Board for an initial vote, I think, in September, and it could be fully implemented by the end of this year. What that ruling will do is set a long-term target for every transit vehicle in the state of California and a date certain by which it must eliminate its tailpipe emissions, so basically it has to become a zero-emissions vehicle. In some ways it’s sort of the icing on the cake after most major cities in California have already declared ambitions to eliminate emissions from their transit fleets.

The reason it matters to us is just so that the industry can move forward with long-term planning on electric fleets. When the California Air Resources Board started this rulemaking process, every energy lobbyist came out of the woodwork to lobby for their particular type of energy. The natural gas industry, in particular, has been really going all out to prevent the passage of something like the ICT because it would basically mean the sunset of the natural gas vehicle industry in the California transit market.

When we started out, we could really only do circulator-style routes, and we needed a fast charger for every route. That was probably five years ago, and that was because our maximum theoretical range was probably 50 miles. Now we’re regularly seeing our electric buses do anywhere between 175 and 225 miles in real service. And with all sorts of topography. I did see the LA Times piece, and it wasn’t written about Proterra vehicles, and I’m glad about that, but I was disappointed to see any article that is critical of early electric vehicle performance. We’ve taken customer feedback very seriously about things like range, all-weather performance and topography, and we’ve invested millions of dollars in R&D to make sure that the electric bus can outperform the diesel bus. Starting in 2019, we will have a driveline in the market that is more powerful than a diesel-engine driveline. Today we have a two-speed transmission in our vehicle, and that helps us a lot with hill climb. By mid-2019, I think you’ll see Proterra electric battery buses capable of outclimbing and out-accelerating diesel buses going uphill.

What’s your manufacturing capacity now, and how much of that are you using? Does that at some point become a choke point, and do you have expansion plans?

It’s one of the more important things that we have to strategically manage. When you’re building an industrial company, you need to have enough capacity to keep up with growth, but you don’t want to put in so much capacity that you under-absorb it or you burn through capital. As of now, we have three production facilities. One is a battery production facility, and we have the capacity to do 500 megawatt-hours of modules and packs out of our California battery factory. That’s also where our corporate headquarters and our high-voltage engineering team are located. It’s highly automated. We invested millions of dollars in it, and it gives us probably a topline capacity of 1,250 heavy-duty electric buses per year.

You may ask why on Earth did you lay in that much capacity for battery electric buses when the entire market in terms of deliveries this year may be 500 or 600 electric buses. The reason is that we have the ability to partner with other companies and help them with their heavy-duty electric vehicle programs, as well. On the bus side, we have a bus factory in Greenville, S.C. We have a bus facility in LA County. Between those two, our topline capacity is anywhere between 750 and 1,000 bus equivalent units. So I think we’re probably good from a factory perspective at least for the next five years, barring something catching us off-guard on the positive side or a major city moving faster than anticipated.

Do you see a future for automated driverless buses? And do you need to plan for that future?

Automation systems are already here, they’re already adding productivity in the market. The Proterra bus uses an automatic overhead fast charger. We’ve been doing Level 1 autonomy as a functional assist, or charging for the last 5 million miles or so of driving. That system has been great in terms of helping to eliminate operator error in aligning a bus for charging. We’ve also partnered with companies like Mobileye for pedestrian protection and enhanced safety. Generally, our view is that the more passengers are on the vehicle and the higher volume the service, the more likely it is that a driver or human operator is going to remain part of the vehicle. Based on everything we’ve learned across dozens of cities in the U.S., the use cases and the requirements to assist passengers are too varied and too high to eliminate human assistance at all for buses.

I also look at it from an economic perspective. If you take a bus driver and you divide the cost of that bus driver by transporting 40 to 50 people per hour, the impact of removing the driver doesn’t really change the cost of the system. It doesn’t really move the needle the way it does for autonomous taxis. It’s possible that companies like Uber and Lyft can’t make any money at scale unless they move to autonomous systems. That’s an opinion that’s out there. But healthy transit systems with high ridership — the economics of having one driver to support thousands of passengers per day per route, it makes a lot of sense.