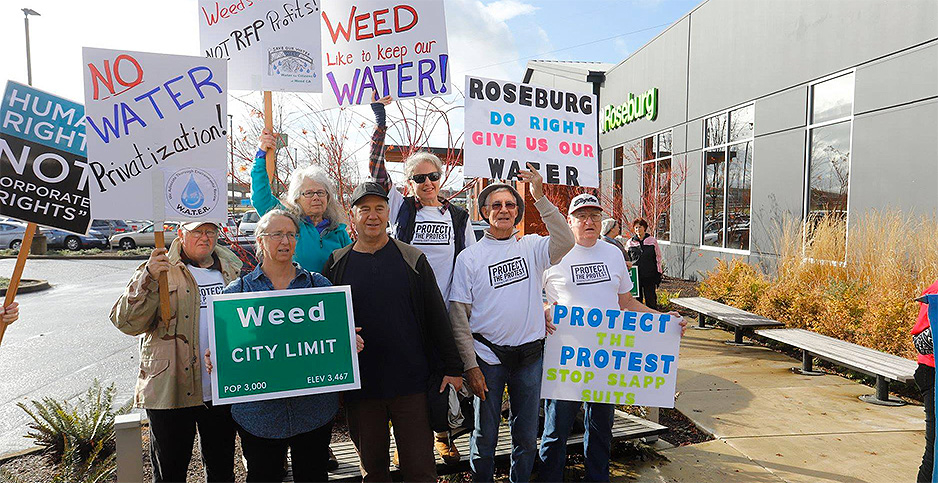 Weed, Calif., residents rally outside the headquarters of Roseburg Forest Products Co. in Springfield, Ore., in this 2018 file photo. Steve Dipaola/Protect the Protest/Facebook

Four years ago, nine activists in the small town of Weed, Calif., were railing against an Oregon timber company threatening the city’s water supply.

With the help of First Amendment experts, the group got the lawsuit tossed by filing a motion under California’s anti-strategic litigation against public participation, or anti-SLAPP, law.

"That’s the whole point of SLAPPs," he said. "You want to drain your target financially and also psychologically. They drag you through the court system for years."

When the city’s water lease ended in 2016, it didn’t have an alternative water source and was forced to negotiate a new lease with Springfield, Ore.-based Roseburg. The city declared a state of emergency. It ultimate reached a new deal with Roseburg. The cost: nearly $100,000 per year.

Weed’s leaders spoke out. Hall — the 2014 Weed "Citizen of the Year" and a City Council member — worked with a group and formed Water for Citizens of Weed California (WCWC) to protest.

They claimed the new lease violated California’s water rights system; the city, not the timber company, had a historic right to that water. The City Council passed a resolution asking the state to declare that to be the case.

But in an unusual twist, the lawsuit didn’t just challenge the city. It also named WCWC and nine individual citizens who had campaigned against Roseburg — even though they didn’t claim any right to the water themselves.

"It was, ‘Oh, shit,’" he said. "It was really just intimidating. I had never felt that before."

At a hearing on the motion in December 2017, Roseburg’s lawyers argued that the case was about cleaning up any "cloud" surrounding who owned the right to the water. And they said Hall and the Weed 9 had threatened their own lawsuit.

"I couldn’t help but notice," she said, according to a transcript, "that the only reason that these names came specifically to the attention of" Roseburg "is because these were the private citizens who were exercising their privilege and their rights under the Constitution."

The prospects of the Weed 9’s new lawsuit are unclear.

That’s mainly because there haven’t been many SLAPPback suits filed, something the Weed 9’s new attorney is well aware of.

Typically, once the target of the lawsuit gets the first case thrown out, they don’t want to deal with the costs and stress of more litigation. California’s SLAPPback law is also relatively new; it was enacted in 2005.

That doesn’t fit here, however, because the Weed 9’s lawsuit targets the attorneys themselves.

And while SLAPPback cases have been uncommon in California, in theory, anyone who prevails in getting the initial case dismissed under California’s anti-SLAPP lawsuit is on solid ground for the SLAPPback suit.

"I’m interested to see how it plays out in this case," Mascagni said.