Protesters’ win ‘a wakeup call’ for other pipeline projects 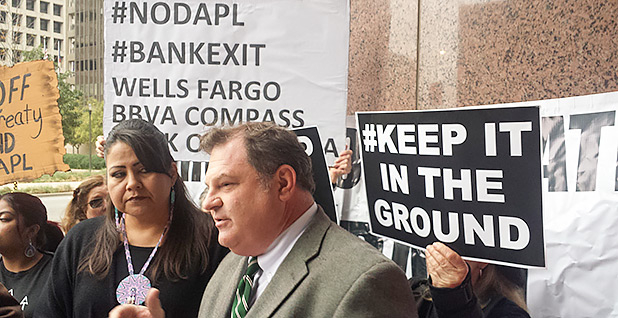 The Lakota Nation's Yolonda Bluehorse, left, and attorney Eric Reed, a member of the Choctaw Nation, speak with reporters at an anti-pipeline press conference in Dallas. Photo by Mike Lee.

The Standing Rock Sioux Tribe scored a temporary victory in its fight against the Dakota Access pipeline Sunday when the Obama administration said it was denying a permit.

But the win could have bigger implications for pipelines nationwide, which face an increase in sophisticated campaigns to derail infrastructure development.

Protesters from around the country have watched the demonstrations on social media and through traditional news outlets. Many of them have visited the temporary camp in North Dakota, where they picked up tactics and motivation.

Kate Baer, who is helping raise money to challenge the Diamond crude oil pipeline across Arkansas, spent five days in Standing Rock, she said in an interview.

"That really inspired me," she said.

How the game’s played

Dakota Access is a 1,170-mile pipeline that would connect North Dakota’s Bakken Shale oil field with refineries and other pipelines in Illinois. Its builder, Dallas-based Energy Transfer Partners LP, had received most of the permits it needed from state and federal agencies when the Standing Rock protests started.

The pipeline was slated to cross under Lake Oahe, a reservoir on the Missouri River, about a half-mile upstream of the Standing Rock Sioux Reservation. The tribe argued that it hadn’t been fully consulted about the route and that construction could endanger the reservation’s water supply and damage cultural sites on surrounding land that used to belong to the tribe.

The tribe sued in July, saying the Army Corps of Engineers improperly gave Energy Transfer a permit to bore the pipeline under the federally controlled lake. At the same time, thousands of protesters swarmed to a makeshift camp outside Cannon Ball, N.D., where they organized marches and other protests to block construction. The protests attracted national attention, including visits from Hollywood actors and statements of support from Democratic presidential candidate Bernie Sanders and Green Party candidate Jill Stein.

The suit is still pending, but on Sunday, Assistant Secretary of the Army for Civil Works Jo-Ellen Darcy ordered the Army Corps to conduct a broader environmental impact statement on the project. The corps will consider an alternate route as part of the review (Energywire, Dec. 5).

Thomas Ahern, a partner at public affairs firm Five Corners Strategies, said he has seen an uptick in community opposition that dates back about 15 years and has accelerated in the past five or six years. The company advises developers of solar, wind, and oil and gas projects.

The Dakota Access protesters’ win, however fleeting, "should be a wake-up call to those companies that are trying to permit and access new pipeline projects," Ahern said.

"That a group of activists in the Dakotas could band together nationwide and cause that kind of pressure and change, regardless of what happens four months from now with a new administration, should be worrisome to anyone who’s looking to move their permitting process in 2017," Ahern said.

And the coming of the Trump administration, which will leave the executive branch and both houses of Congress in Republican hands, may not help pipeline developers, he said.

"Most of the activists will be taking their advocacy, and their actions, and their member base [to] the state level," he said.

Ahern sees state and local governments as easier to influence than national regulators. A few hundred letters or phone calls can overwhelm a state official and change the tenor of conversations with a developer, he said, while the Federal Energy Regulatory Commission is accustomed to large-scale pushback.

From the company’s perspective, he said, "it’s a lot easier to deal with an agency like FERC, and your senator and your congressman, and to get support that way, than it is to go to 50 different towns along your pipeline route" holding open houses and coffee gatherings, only to be met by state officials worried about the level of local opposition they’re experiencing.

Ahern pointed to some aspects of the Dakota Access fight that won’t necessarily translate to other pipeline projects, like the water crossing permits controlled by the Army Corps. But more broadly, he said, social media has enabled advocates and activists to organize much more quickly and effectively than they could in the past, and those tools will continue to be applied to energy projects.

"The people who should be most motivated to get this done, they wait too long and they allow narratives to be built by opponents, they allow opposition to be built by activists, they allow communities to band together against them, all because they believe, ‘Well, we’ll have FERC on our side,’" he said. "That’s not how the game’s played anymore."

‘The world was watching’

Individual pipeline protesters and landowners around the country were already facing off against police in some cases before the Standing Rock protests started, said Maya van Rossum, head of the Delaware Riverkeeper Network in Pennsylvania. Activists in her state have disrupted government meetings, jammed hearings of the Federal Energy Regulatory Commission and filed lawsuits to slow down construction of pipelines serving the Marcellus Shale gas field. But the Pennsylvania protests have been largely local affairs.

The Standing Rock protests — which featured hundreds of protesters confronting tear gas, rubber bullets and fire hoses — drew national attention. While there have been hundreds of arrests and sporadic reports of violence and vandalism, the North Dakota protesters typically used techniques honed during the civil rights movement of the 1950s and ’60s, from mass marches to group prayers (Energywire, Oct. 13).

"The difference … is the world was watching, and it was so large," van Rossum said. "Everybody can see the truth."

The Standing Rock tribe’s legal action also could provide a path for other groups fighting pipelines, Eric Reed, an attorney, said at a press conference held yesterday by the Society of Native Nations in Dallas.

The tribe said the Army Corps broke the project into several segments and used its "nationwide" permitting system to grant permission each water crossing. The nationwide permits are intended for minor projects that have only small impacts and don’t require the government to study the impact of the whole project.

"This segmentation process, which is unlawful and illegal, is going on everywhere in the United States where these projects are," Reed said.

Community groups in Arkansas are already using that argument against the Diamond pipeline. The 440-mile, $900 million pipeline is intended to connect an oil collection hub at Cushing, Okla., with a refinery in Memphis, Tenn.

Like the Dakota Access pipeline, the Army Corps has divided the Diamond line into several segments and issued a series of nationwide permits for each water crossing. Several of the crossings are close to the water supplies for towns along the route, the Arkansas Times reported last month.

After the North Dakota decision, the corps "may look at these permits more closely in the future, and may reconsider some of the permits that they have issued here in regards to Diamond Pipeline," Melissa Adams, an organizer for Arkansas Water Guardians, said in an email.

In the public eye

John Stoody, who leads government and public relations with the Association of Oil Pipe Lines in Washington, D.C., said his group does not expect to see protests like those that have characterized the Dakota Access pipeline build-out and the Keystone XL fight spread more broadly in the industry.

"We know that pipelines will stay in the public eye, and we know that we have work to do to share with the public how pipelines are a safe transportation mode," Stoody said.

But he put much of the responsibility for the drawn-out protests at Standing Rock on the shoulders of the Obama administration. "With the new administration coming in, tactics such as ‘defeat by delay’ will be harder to undertake, and we won’t get to the same place we are with the current Dakota Access situation, where opposition was allowed to build and in some sense encouraged by continuing delay," he said.

President-elect Donald Trump and members of his team said he will clear the way for the project to move forward come January (Greenwire, Dec. 5).

Stoody said he expects a smoother development path for infrastructure development under the incoming Republican administration. "The current process takes some time, and that’s OK; these projects deserve close study," he said. "But we do see an end to unwarranted delays after those review processes have been completed."

Cathy Landry, a spokeswoman for the Interstate Natural Gas Association of America, also predicted smoother permitting under the Trump administration. On the flip side, environmental groups have been using pressure on pipelines as a way to slow development of fossil fuels.

"I don’t think that changes," she said in an email.