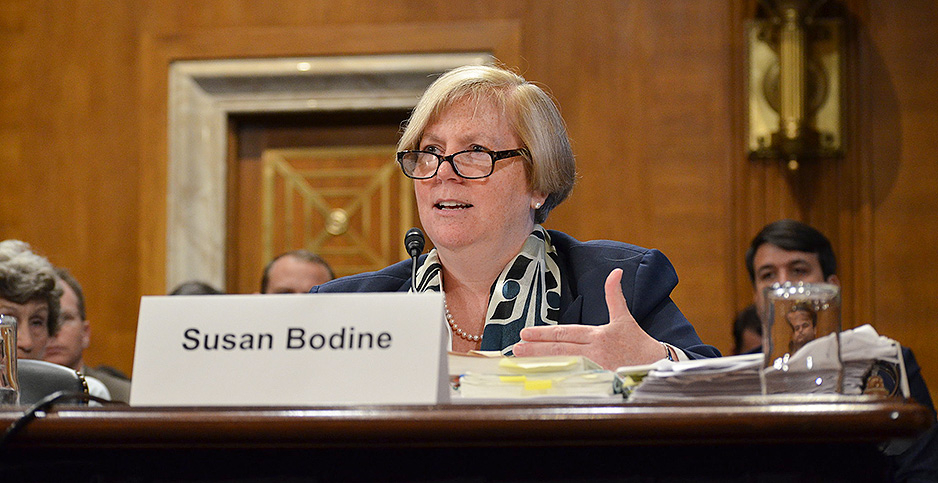 EPA’s controversial coronavirus enforcement policy ends today as the pandemic continues to rage across the country.

Critics blasted enforcement chief Susan Bodine when she issued the March 26 policy, which signaled laxer enforcement of pollution rules during the pandemic.

"Why start it and why end it when COVID is still going?" asked Joel Mintz, a former EPA official who’s now an environmental professor at the Nova Southeastern University Law Center. "It’s all politics. There is no real reason. I don’t get it."

The environmental impact of the policy will be difficult to measure because EPA didn’t require companies in the oil and gas sector and other industries to inform the agency if they missed reporting and monitoring of pollution, including leaks, because of virus-related reasons. Instead, the policy said EPA would ask for documentation "upon request."

"I read through it and it was like, where are the people in all of this?" said Eric Schaeffer, a former Clinton and Bush EPA enforcement chief. "You don’t want to put workers in jeopardy, for sure. At the same time there’s a community on the other side of the fence, what are you going to tell them?"

Schaeffer’s group, the Environmental Integrity Project, sued EPA to force it to release records showing which companies and facilities are out of compliance. An Associated Press investigation found EPA paved the way for states to adopt similar enforcement clemency policies, and waivers were granted in more than 3,000 cases.

Jeffrey Hammons, an attorney at the Environmental Law & Policy Center, said some flexibility over enforcement was reasonable, but he suggested that tighter guidelines were needed.

"Does a facility just need to plead COVID and that’s it?" he asked. "It’s not clear, and if that’s the case, then it’s not as much an exercise in discretion as it is an abdication. We just don’t really know."

Bodine, who declined to be interviewed for this story, has said she was shocked by the overwhelming criticism from environmentalists. She claimed that her office does not have the bandwidth to approve emergency compliance plans for the 4.6 million facilities it regulates (E&E News PM, April 17).

EPA did not respond to questions about how enforcement staff plan to handle requests moving forward. On Aug. 20, the agency updated its website to indicate there would be no extension of the policy despite the fact that COVID-19 infections and deaths are surging in some states.

"[U]nlike the situation in March when the policy was first issued, EPA expects that entities now have experience with such constraints and will have modified their operating procedures to account for such contingencies," the policy update reads. "As always, if noncompliance occurs, EPA will be reasonable when deciding what enforcement response is appropriate, taking all relevant facts and circumstances into account."

Grant Gilezan, an attorney at the firm Dykema who represents the automotive and petrochemical industries, said he had some concerns about the policy’s termination.

"There is nothing magic about Aug. 31," he said Friday. "To me it was just an arbitrary date that EPA picked out."

That said, he agreed "there has been learning and adapting. Is the regulated community in a better position to remotely operate including getting things done in a practical standpoint? Sure, there has been a lot of getting used to."

Industry groups told E&E News they would not be asking for an extension.

The weeks before Bodine issued the policy, companies and trade groups flooded her office with questions about how the agency planned to conduct enforcement while most of the country was shut down.

On March 20, six days before Bodine issued the policy, Alexandra Dunn, who heads the chemicals office at EPA, wrote to Bodine: "The pressure is building. I had a group ask today to delay the [Toxic Substances Control Act] fees rule til the end of the calendar year," according to emails the Sierra Club and others obtained through the Freedom of Information Act.

The emails also show Bodine was somewhat dismissive of trade group complaints about employees having to travel to obtain signatures certifying compliance.

She wrote to Dunn: "Apparently [the American Petroleum Institute] has never heard of electronic signatures."

In fact, Bodine is not known to be cozy with the industry, Mintz said.

"She’s friendless," he said, excluding some of her colleagues and Republicans on the Hill. "Industry is not her friend. Environmentalists kind of lump her in with the rest of the administration, which is understandable."

Yet the enforcement policy is the second time Bodine — known to be a sharp, meticulous attorney — has issued a divisive pollution-related edict, Schaeffer noted.

"She knows how to write a policy that is a kind of read-between-the-lines thing," he said. "She certainly isn’t stupid."

A month after she was confirmed by the Senate in 2018, Bodine issued a policy establishing "cooperative federalism," which said it would "immediately begin the movement toward a more collaborative partnership between the EPA and authorized States."

Critics, including Democratic lawmakers, condemned the move as a way for the agency to slow enforcement actions.

"The worry about cooperative federalism is that it’s so much about process and not enough about results, and enforcement is a result program," Schaeffer noted. "They either enforce, or they don’t."

Bodine defended her policy last year before the House Energy and Commerce Committee. "Cooperative federalism means that we cooperate with states and we discuss how our combined resources can best address noncompliance," she told the panel. "It does not mean that EPA stays out of authorized states."

But as a practical matter, an EPA attorney said the change meant that enforcement agents at regional offices throughout the country have to check in with state officials when initiating an inspection — a departure from past norms.

Generally, the attorney thought Bodine "knows her areas of environmental law very well" but she has at times acceded to pressure from other political appointees. "She wasn’t strong enough to push back," the attorney said.

She earned a history degree from Princeton University, where her father and brother also studied, and later obtained a law degree from the University of Pennsylvania.

She spent six years at the firm Covington & Burling before moving to Republican offices on Capitol Hill. In the late 1990s and early 2000s, she served on the House Transportation and Infrastructure Subcommittee on Water Resources and Environment.

She served as the Superfund chief at the Bush EPA before working as a partner at Barnes & Thornburg from 2009 to 2015. She represented cities, including Evansville, Ind., in a wastewater treatment case, and the American Forest and Paper Association, a trade group whose members are regularly the subject of EPA enforcement probes.

People sitting across the table from Bodine have called her polite and professional.

In 2015, she was lured back to the Hill to serve as chief counsel for the Senate Environment and Public Works Committee, when climate science denier Sen. Jim Inhofe (R-Okla.) was the chair.

Former EPA Chief of Staff Ryan Jackson also worked on the committee. She has touted her work on a bill that focused on the drinking water crisis in Flint, Mich. At the time, Republican politicians roasted EPA for its handling of the crisis (Greenwire, July 13, 2017).

"I think she’s more of a traditional Republican," Schaeffer said. "They didn’t all used to despise government."

Some have wondered why she joined the Trump team in the first place.

"From what I have heard, Bodine was naive regarding what she was getting into when she sought a position with the Trump administration," said Mintz, the former EPA official. "Obviously, her assumptions were totally misplaced."

He called the COVID-19 enforcement policy "a huge miscalculation that has left Bodine with few friends." And although he said he feels somewhat sorry for her, she volunteered for the job.

"The way she made her bed is the way she sleeps in it," he said.