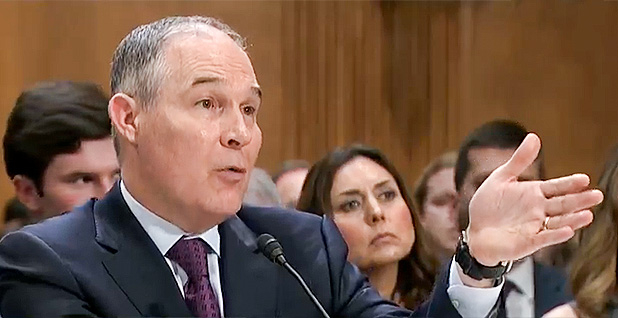 But he stressed he didn’t "manage or control" the group, called Liberty 2.0. The group was staffed by his campaign aides and housed in his campaign office. It raised $450,000 before it shuttered on the day of his confirmation hearing this month (Climatewire, Jan. 19).

Such are the contradictions of fundraising with the new kind of PACs. Politicians can raise unlimited money for the super PACs, run by their aides and supporting their interests, but maintain they are not "coordinating" with them (Energywire, Jan. 6). Liberty 2.0 had to disclose donors to the Federal Election Commission. Other organizations, often called "dark money" groups, don’t have to disclose publicly.

The decision to close Liberty 2.0 avoided the prospect of Pruitt taking over a regulatory agency while still raising unlimited donations from regulated companies (Energywire, Jan. 10). But two dark money groups, America Rising Squared and Protecting America Now, are now pressing for his nomination.

Democratic senators sharply questioned Pruitt about his ties to the groups and his fundraising during his Jan. 18 confirmation hearing. His acknowledgement of fundraising for Liberty 2.0 and another group called Oklahoma Strong came in written responses to follow-up questions.

"I have on occasion solicited funds for Liberty 2.0," Pruitt wrote in his responses. "I do not recall the contents of any specific conversations that I may have had in this context."

The Democratic legislators pressed him in written questions on whether he raised money from oil or agricultural interests.

"Given my state’s deep ties to farming and oil and gas, I do not doubt that I at some point fundraised from individuals with some connection to those industries," Pruitt wrote, referring to Oklahoma Strong. He said he didn’t remember details.

As for specifics, Pruitt repeatedly told the lawmakers to contact the staff of the organizations or check state contribution records.

Liberty 2.0 collected $102,500 in energy money in August 2015 alone. That was around the time of a key hearing on Pruitt’s challenge to the Obama administration’s Clean Power Plan. The donations included $50,000 from Murray Energy Corp., one of the nation’s largest coal companies; $25,000 from Jeffrey McDougall, president of JMA Energy Co., an oil and gas company; and $15,000 from Continental Resources Inc., led by Trump ally Harold Hamm.

Pruitt said he was not aware of any "correspondence" with two dark money groups supporting his nomination. He left unanswered whether there was any "other communication." Protecting America Now’s fundraising is being coordinated by Kate Doner, who was also paid to work for Liberty 2.0 (Climatewire, Jan. 13).

As to whether his fundraising would create conflicts of interest with the industries and companies he would regulate, Pruitt pledged to consult with ethics officials. But those ethics officials have written that they can’t review his links to the political and dark money groups. The Hatch Act limits a Cabinet secretary’s ability to raise money for political committees but doesn’t bar it.

Democrats said his answers on fundraising and other issues were shallow, evasive and, in some cases, "demonstrably false."

Whitehouse was particularly irritated at the roughly dozen times Pruitt told senators they could file open records requests for information from government offices, including his Oklahoma attorney general’s office. He noted that one request has been pending for more than 700 days.

E&E News has received no records in response to a request submitted Dec. 9, or several subsequent requests.