Pruitt aides are getting out 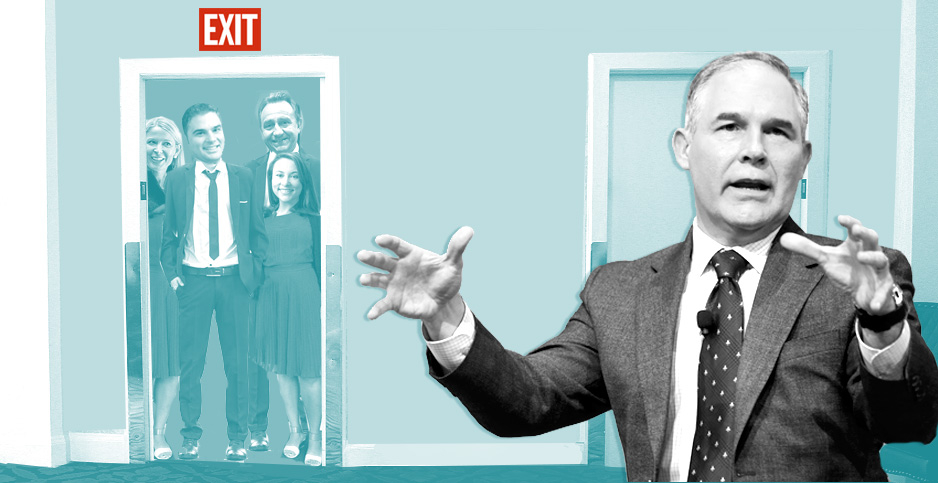 The turnover in the upper ranks is happening as Pruitt continues to come under fire for ethics allegations. He’s at the center of multiple probes across the government, some of which have also targeted some of his political staffers. The controversies aren’t expected to die down anytime soon, and Democrats and Republicans alike have called for President Trump to fire his embattled EPA boss.

This type of staff exodus is unusual, according to Bill Reilly, who led EPA during the George H.W. Bush administration.

"A transition like this usually occurs when there’s a change of administrator. You don’t see this kind of hemorrhage as a matter of ordinary course, especially not after just a year in office," Reilly said. But, he said, staff turnover has been common throughout the Trump administration. "Longevity doesn’t appear to be a characteristic of staff service in this administration anywhere."

EPA staffers and sources close to the agency say it’s been a tough place to work as critical reports about Pruitt’s behavior have continued to pile up.

Pruitt appeared on Capitol Hill last week, where he faced outrage from lawmakers. His strategy was in part to deflect some of the criticism by pinning blame on his staffers.

"It can’t be a happy experience to have your boss throw you under the bus," Reilly said. "I can well imagine that the prospects for the near term are not pleasant for a number of people whom he blamed for giving him bad advice on expenses." He added that it’s unclear "whether [Pruitt] has lost confidence in his staff or they in him."

Maura Cowley of the Sierra Club said of the staff departures, "Whether EPA staff are getting implicated for supporting Pruitt’s corrupt behavior or getting thrown under the bus by their boss, Pruitt is making the EPA a terrible place to work. Those are just a few of the reasons he should be the next one out the door."

While some other top staffers might also leave amid the controversies, some aren’t expecting mass departures.

Staffers who came from Oklahoma Republican Sen. Jim Inhofe’s office, for example, won’t likely "be leaving anytime soon," the former Republican Senate aide said. Because Deputy Administrator Andrew Wheeler — a former Inhofe aide — would likely step in if Pruitt is fired or resigns, "a lot of those guys might feel even safer," that person said. Pruitt’s chief of staff, Ryan Jackson, and other top EPA political appointees are alumni of Inhofe’s office.

"We have to be good stewards of taxpayer dollars, and I think that we take that promise seriously to the American people. I think that there are certain areas that the administrator would acknowledge were mistakes that he would want to fix," Short said.

"The core management team around the administrator is beginning to dissolve," Sussman said. "These are important positions. Having worked at the agency in leadership, these are not positions that are easily filled, and you need the very best people."

Bowman, who is leaving to join the staff of Sen. Joni Ernst (R-Iowa), led the press shop tasked with fielding questions about Pruitt’s behavior.

Former EPA boss Reilly said of the agency’s press operation, "It seems like it’s a scandal a day, and of course you’re constantly in war mode."

Bowman said today in a statement, "I leave extremely thankful for the opportunity to serve the Trump Administration and Administrator Pruitt."

An EPA official told E&E News that Bowman’s last day at the agency is May 11. It is still unclear who will be EPA’s next head of public affairs, according to the official.

Under Bowman’s watch, the EPA press office frequently sparred with reporters over their coverage of Pruitt and the Trump EPA.

Journalism groups and even some administration officials have been critical of EPA’s press shop under Pruitt.

"You can argue that the lack of transparency on the part of the comms team has added to the administrator’s problems because it resulted in the media digging further than they would have otherwise," said a former administration official.

EPA’s public affairs office issued an unusual press release last September that blasted an Associated Press story, criticizing a reporter by name and citing other stories that were critical of his coverage. That drew sharp rebukes in response, including from Rep. Betty McCollum (D-Minn.), a top House appropriator, who scolded EPA for misusing taxpayer dollars in issuing the release (Greenwire, Sept. 12, 2017).

The former Oklahoma banker is considered a close friend of Pruitt’s and was tasked with leading the agency’s Superfund task force. He has come under scrutiny after the Federal Deposit Insurance Corp. banned him for life from the financial industry.

Kelly canceled an appearance at a congressional hearing this January. Democrats have called on the EPA inspector general to investigate on how Kelly was hired.

Perrotta also stepped down this week. He was a career special agent at EPA who served as a member of several administrators’ personal security details over the past decade.

Perrotta was promoted to take charge of Pruitt’s detail and had a hand in the EPA chief’s controversial security measures, including frequent first-class travel, a secure phone booth and 24/7 security for Pruitt. Those decisions are already under IG review, and Perrotta met with House Oversight and Government Reform Committee staff for a transcribed interview this week.

Sussman said Pruitt may be shedding staff in order to reduce his exposure to any potential wrongdoing at EPA.

"In the current mode that he is in, I think Pruitt is all about survival, and survival might mean severing his ties with people he is close to so he can reduce his liabilities," Sussman said. "His ability to execute as administrator has been undermined. He has lost some of the key staff that are essential to doing his job effectively."