Pruitt back on the Hill; House to issue DOE, water, ag bills 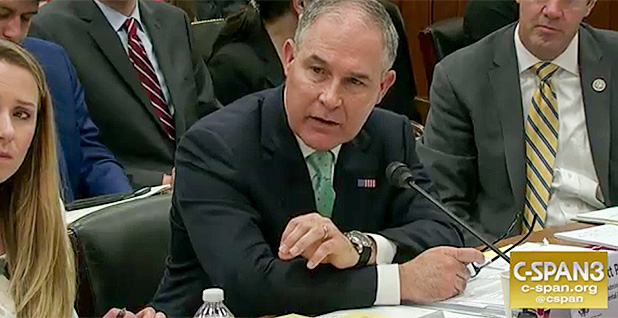 U.S. EPA Administrator Scott Pruitt will be back on Capitol Hill this week. C-SPAN

House appropriators will unveil their spending bills for the Department of Energy, water programs and agriculture this week, as Republican negotiators scramble to strike a deal on the budget resolution.

U.S. EPA Administrator Scott Pruitt will also be back on Capitol Hill to defend the president’s spending blueprint, along with leaders from the Army Corps of Engineers, the Labor Department and the United Nations. And lawmakers will begin marking up legislation, released last night, to fund the Defense Department.

House Budget Chairwoman Diane Black (R-Tenn.) wants to mark up the budget blueprint this week, but familiar jostling among fiscal and defense hawks over the cap for the military was unresolved when the Republican caucus met Friday.

House GOP appropriators said non-defense spending bills would be funded at $511 billion for fiscal 2018, as the caucus continues to debate between $621.5 billion for defense supported by Black and $640 billion sought by the hawks.

Also unresolved is the depth of mandatory spending cuts in reconciliation instructions that will be included in the House budget. The process of reconciliation allows lawmakers to address fiscal issues without the threat of a Senate filibuster.

The delay in passing a budget is further straining an appropriations process already behind schedule because the White House didn’t submit its full request until May. Finishing a budget resolution is also crucial to Republicans’ plans to rewrite the tax code given their intention to rely on reconciliation.

House Minority Whip Steny Hoyer (D-Md.) chastised Republicans for injecting uncertainty into the spending debate. "You need to have some agreement on the budget numbers so that you know the consequences of marking a bill to a certain number assuming there’s an upper limit," he said last week.

In the Senate, Budget Chairman Mike Enzi (R-Wyo.) has also yet to schedule a markup.

"We’re very familiar with the programs and the levels for the past year and what we just finished in this five-month period," said New Mexico Sen. Tom Udall, the top Democrat on the Interior and Environment Appropriations Subcommittee, earlier this month. "But you need a number, otherwise you’re just kind of flailing around."

EPA chief Pruitt will appear at the Senate Interior-Environment spending panel for his second trip to Capitol Hill on the budget. He will have a tough sale, with the president’s budget proposing to slash EPA by roughly 30 percent or more than $2 billion, resulting in 3,800 fewer jobs.

Even though Republicans have long been critical of the agency, Pruitt has been hearing concerns from the GOP about the cuts. Rep. Tom Cole (R-Okla.) joked that Pruitt would receive more money than he asked for (Greenwire, June 15).

This week, Pruitt could hear from Sens. Patrick Leahy (D-Vt.) and Chris Van Hollen (D-Md.) on EPA’s plans to zero out geographic programs that clean up areas like Lake Champlain and the Chesapeake Bay.

Pruitt will have allies on the subcommittee who have cheered his energy-friendly actions at EPA. Sens. Steve Daines (R-Mont.) and Shelley Moore Capito (R-W.Va.) could ask Pruitt about his plans to roll back agency regulations that have targeted coal and other fossil fuels.

The release of the House energy and water spending bill will show how far GOP appropriators will go in ignoring the administration’s demands, including eliminating the Advanced Research Projects Agency-Energy (ARPA-E) and cutting development money for carbon capture and sequestration.

When it comes to water projects, the Trump administration’s budget proposal would give the Army Corps roughly $5 billion for fiscal 2018, down from the more than $6 billion the corps received in the recently passed omnibus spending bill. The Bureau of Reclamation would receive $1.1 billion, down from $1.3 billion.

The administration, he said, is "looking at the high-performing projects" when drafting the spending plan, which proposed to fund those with the best cost-benefit ratio, as well as those with imminent problems.

Schedule: The Senate Interior and Environment Appropriations Subcommittee hearing on the EPA budget is Tuesday, June 27, at 9:30 a.m. in 124 Dirksen.

Schedule: The House Energy and Water Development Appropriations Subcommittee spending bill markup is Wednesday, June 28, at 11 a.m. in 2362-B Rayburn.

Schedule: The Senate Energy and Water Development Appropriations Subcommittee hearing on the Army Corps and Bureau of Reclamation budget is Wednesday, June 28, at 2:30 p.m. in 138 Dirksen.