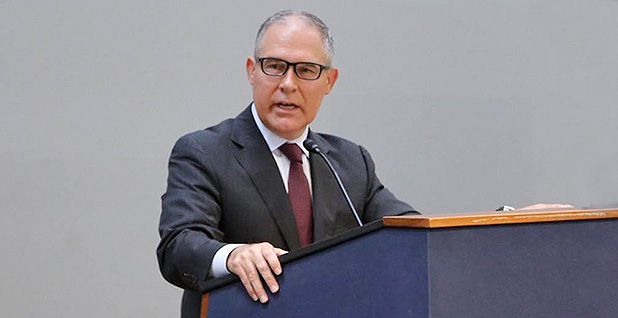 President-elect Donald Trump’s pick to run U.S. EPA has already eliminated one environmental protection entity during his time in government.

Oklahoma Attorney General Scott Pruitt (R) quietly folded the Environmental Protection Unit in his office after he was first elected in 2010. Around the same time, Pruitt, who says environmental regulation is best left to the states, created a Federalism Unit under his solicitor general to handle Pruitt’s legal challenges against EPA.

"One of the first things he did was dismantle the Environmental Protection Unit and form the Federalism Unit," said Mark Derichsweiler, who retired a year ago from his job at the Oklahoma Department of Environmental Quality. "It just didn’t get much attention."

Responding after this story was initially published, Pruitt’s staff said the environmental unit wasn’t dismantled, but instead was moved under a new management structure. They were put under the solicitor general’s office, who also leads the Federalism Unit.

"It’s important to note that responsibilities for environmental staff and their caseloads have not changed since AG Pruitt took office," said Pruitt spokesman Lincoln Ferguson. "Under the leadership of AG Pruitt, this team has held bad actors accountable and protected stewardship of Oklahoma’s natural resources."

Trump said during the campaign he’d like to abolish EPA entirely, though he later softened his rhetoric. Still, he and his team have made it clear they want to slash Obama administration programs and shrink the agency’s role (Greenwire, Dec. 5).

His selection of Pruitt was greeted by green groups as an act of political war, because he’s made a career of fighting the agency he would now run.

The Environmental Protection Unit in Oklahoma was created in 1996 by Pruitt’s Democratic predecessor, Drew Edmondson, who didn’t seek re-election in 2010. It investigated water contamination from refineries, lead paint waste and illegal dumping. But it is probably best known for its yearslong fight with poultry companies over pollution in the Illinois River basin. Oklahoma accused 14 companies of allowing nutrient runoff to pollute the basin.

State budget documents show that funding for "environmental law" in the attorney general’s office fell from $463,000 in 2010 — the year before Pruitt arrived — to zero in 2014.

In the state’s 2016 budget, there was still a line item for "environmental law" with zero dollars.

The website for the Oklahoma Attorney General’s Office notes that the AG "represents the interests of … the state’s natural resources." But on that page, none of the descriptions of the 12 units lists the environment as part of its mission.

For example, the mission of the Public Protection Unit is listed as protecting consumers from fraud, along with managing the state’s "Do Not Call" registry and a state mortgage settlement fund.

"He hasn’t really done anything to protect Oklahomans," Derichsweiler said. "He campaigned on EPA overreach."

He is among the chief attorneys general leading a 28-state fight against the agency’s carbon regulations for power plants. He’s joined a lawsuit against methane emissions limits for the oil and gas sector, and for years waged an unsuccessful legal fight against a haze plan for his state.