Pruitt, ethics lawyers will get to know each other 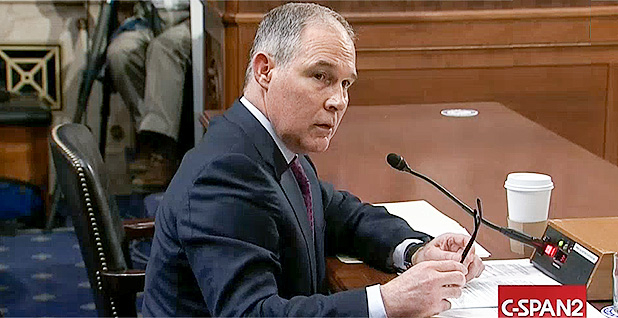 Scott Pruitt will have to take a cautious but not untrodden path to avoid conflicts of interest if he’s confirmed as U.S. EPA administrator.

The Republican Oklahoma attorney general has sued EPA early and often over several of its rules, with many of those lawsuits still pending against EPA. As part of the nomination process, Pruitt signed an ethics agreement stating that he would seek authorization to intervene in matters involving his home state, which includes that litigation, during his first year as EPA chief.

Checking with EPA lawyers before he weighs in on issues he previously litigated doesn’t go far enough for critics of President Trump’s nominee. Democratic senators and environmental groups say that Pruitt — an EPA critic who has raised hundreds of thousands of dollars in campaign contributions from the oil and gas industry — is too conflicted to lead the agency.

"He tried to overturn those rules, saying they were unconstitutional and contrary to federal laws, but yet he is asking the American people to believe that he will have an open mind about those rules," John Walke, clean air director for the Natural Resources Defense Council, told E&E News. "Those are diametrically opposed, incompatible views."

Suggesting Pruitt’s critics would never be satisfied, Inhofe said, "The other side just happens not to like the answer."

A Jan. 16 letter from Kevin Minoli, an EPA principal deputy general counsel and the agency’s designated agency ethics official, said Pruitt’s ethics agreement is not the same as but is "very similar" to Jackson’s arrangement, in which she, too, agreed that during her first year as administrator, she would seek authorization before jumping into issues involving her home state of New Jersey.

Democrats have pushed Pruitt to go further — to forever recuse himself from Oklahoma matters, as Carol Browner did with Florida issues when she was President Clinton’s EPA chief.

Minoli, however, said in his letter that Pruitt following one example or another of prior administrators doesn’t result in his being in or out of line with agency ethics rules.

"Those comparisons do not demonstrate compliance or non-compliance with the federal ethics requirements," Minoli said.

Jeff Holmstead, who led EPA’s air and radiation office during the George W. Bush administration, said Democrats’ complaints regarding Pruitt’s potential conflicts don’t hold up, given how wide-ranging the agency’s rules are that have been targeted by the Oklahoma attorney general.

"All this litigation is about rules that have general applicability. They don’t uniquely affect Oklahoma," said Holmstead, now a partner at Bracewell LLP.

"If he was suing EPA over EPA’s refusal to give grant money to Oklahoma, that would be a particular matter, and he would have to recuse himself."

To recuse or not recuse

Pruitt was pressed repeatedly by Democrats at his confirmation hearing last month on whether or not he would recuse himself from pending litigation against EPA that he played a part in as Oklahoma’s attorney general. In response, Pruitt said that he would listen to career attorneys at the agency and would step back if told to do so.

"I will recuse if directed by the EPA ethics counsel, career staff at EPA ethics," Pruitt said. "They have been there, and I will follow their counsel and guidance."

Consequently, Pruitt might find himself talking to EPA ethics lawyers quite a lot.

The Oklahoma attorney general has been involved in several major cases against EPA rules that are still pending — including litigation over the Clean Power Plan, the Waters of the U.S. rule and mercury standards, to name some. Since his nomination, Oklahoma has slowly been asking the courts to remove Pruitt from litigation that he is involved in against EPA.

According to Minoli’s letter, if Oklahoma were a party to a lawsuit against EPA, Pruitt as agency chief would have to seek authorization to participate in that case, under his ethics agreement. In addition, Pruitt would be subject to state bar rules. He is a member of the Oklahoma Bar Association, which has restrictions on conflicts of interest.

NRDC’s Walke said bar rules could be a hindrance for Pruitt at EPA.

"He is subject to ethics rules as a federal employee, and he is subject to bar rules for the bar or bars where he is a member," Walke said, noting that Jackson wasn’t a lawyer like Pruitt. "An attorney may not switch sides on the matter that the attorney has already litigated."

Holmstead disagreed with that assessment, considering Pruitt would be EPA’s administrator, not its general counsel.

"He will not be a lawyer for EPA. He will be the head of the agency," Holmstead said. "He is not going to EPA to be EPA’s lawyer."

What seems to be clear is that Pruitt and EPA attorneys are bound to be in close contact. Jackson frequently had to seek ethics advice early on in her tenure as EPA administrator, according to documents obtained by E&E News under the Freedom of Information Act.

Obama’s first EPA chief was given at least four "impartiality determinations" relating to air quality standards, pesticide products, a Clean Water Act permit fee rule and a regulation involving the Toxics Release Inventory. All of those matters involved Jackson’s former employer, the state of New Jersey, where she was commissioner of environmental protection and former Gov. Jon Corzine’s (D) chief of staff.

Further, even before she was confirmed as administrator, Jackson sought authorization on whether or not she could participate in two specific lawsuits involving the Garden State and EPA. Later in 2009, Jackson secured an "ethics determination" to participate in coal mining issues, given that she owned stock in Bank of America, which had a policy not to do business with companies engaged in mountaintop-removal mining.

Pat Hirsch, who signed off on Jackson’s determinations as EPA’s then-acting general counsel, said the documents show how the ethics process is supposed to work.

"It is meant to protect the public from conflicts of interests but also protect the person from being hauled up in front of whoever," said Hirsch, who is now retired from federal service. "You want the ability to review them ahead of time. You want them to come to you and ask you questions, so you can get ahead of any problems and protect them and the public."

Asked if Pruitt should recuse himself from matters involving pending litigation involving his state and EPA, Hirsch said that might be advisable.

Pruitt’s critics have said the internal ethics process at EPA may not be strong enough to handle the Oklahoma attorney general’s potential conflicts. Walke questioned whether career employees at EPA could tell their top political boss to stay out of certain matters.

"It seems highly implausible that a subordinate is going to tell his boss and the head of the agency to do something that he has said that he was not going to do," Walke said, adding that Pruitt would have to obey any ruling from EPA ethics officials.

Pruitt could soon be at the agency. The Senate may vote on his confirmation this week; the Oklahoma attorney general is expected to be approved on a party-line vote.