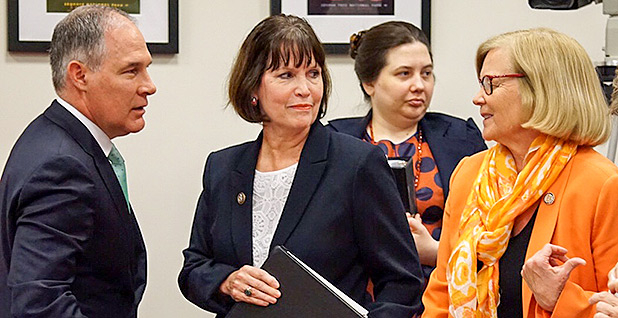 U.S. EPA Administrator Scott Pruitt, a polarizing figure in energy and environmental circles, emerged yesterday from his first appearance on Capitol Hill largely unscathed. But his hard-cutting budget, aimed at refocusing the agency on its core mission, is likely in tatters.

Pruitt, a former Oklahoma attorney general whom some see as a potential successor to Sen. Jim Inhofe (R-Okla.) if he retires in 2020, acted every bit a politician as he deftly deflected lawmakers’ concerns. Pruitt often left the impression that he was sympathetic to even opposing views. His Southwestern drawl never rose nor did his firm smile break for much of the two-hour hearing, during which he never directly challenged a lawmaker.

Concerns over the Paris climate deal were met with promises he was already working with allies on other climate reduction efforts. He rebutted criticism about rolling back the Clean Power Plan by saying little could have been done anyway with it tied up in federal court. And he laughed off talk about plans to close regional EPA offices as "pure legend."

Kaptur, who bashed plans to zero out funding for the Great Lakes Restoration Initiative, sought to bait the EPA chief by inviting him to "travel east of the Mississippi" to see how successful the conservation program has been.

He did not take the bait, saying he’d be "happy" to make the visit.

"We will not serve you Asian carp," Kaptur shot back, drawing laughs from Pruitt and lawmakers of both parties for her reference to the Great Lakes’ well-known invasive species.

While appropriators may not have had much success in tarnishing Pruitt, they made clear they would reject the administration’s fiscal 2018 budget request to slash spending at EPA by a third and eliminate thousands of agency workers.

"I am here to remind everyone that the power of the purse lies here on Capitol Hill," said Appropriations Chairman Rodney Frelinghuysen (R-N.J.), who said he was most alarmed about Superfund cuts as his state leads the nation with toxic waste cleanup sites.

Rep. Ken Calvert (R-Calif.), the chairman of the subcommittee, did not cite any specific budget cuts he favored, suggesting a major rewrite is coming when his panel marks up the EPA spending bill in July. Calvert used his opening statement to say many cuts would be "nontenable," including those to the Superfund and a diesel emissions grant program.

Rep. Tom Cole (R-Okla.), a senior appropriator who said he’d known Pruitt for more than 20 years and encouraged him to run for attorney general, reminded him the "final decisions rest here" on the EPA funding.

"I can assure you that you will be the first EPA administrator to come before this committee in eight years that will get more money than they asked for," Cole added.

Minnesota Rep. Betty McCollum, the subcommittee’s ranking Democrat, said she was "baffled" that efforts on radon were cut, while Rep. Nita Lowey of New York, the top Democrat appropriator in the House, asked Pruitt if he knew about the endocrine disruption research program on the chopping block.

Pruitt said he knew the program and suggested research into the chemicals that can disrupt hormones would be absorbed by another part of the agency.

"That’s great," said Lowey after Pruitt expressed support for the program and its funding. Only minutes earlier she had called the budget a "disaster" and questioned the administrator’s ties to the oil and gas industry.

Rep. Derek Kilmer (D-Wash.) noted several women from Moms Clean Air Force were at the hearing with their toddlers, who would suffer in the future if the budget eliminated voluntary emissions reduction programs.

"I will work with you," replied Pruitt, nodding along with Kilmer’s concern.

The EPA chief seemed to have little interest in defending a budget that he said Congress will rewrite, but he often made vague commitments to how he would change it.

Asked about reports he had complained about some of the reductions to the White House, Pruitt said he did not recall the specific conversation but said he had talked to the Office of Management and Budget about EPA’s importance.

Kaptur, who asked the question, replied to Pruitt’s spin, "I had a hunch."