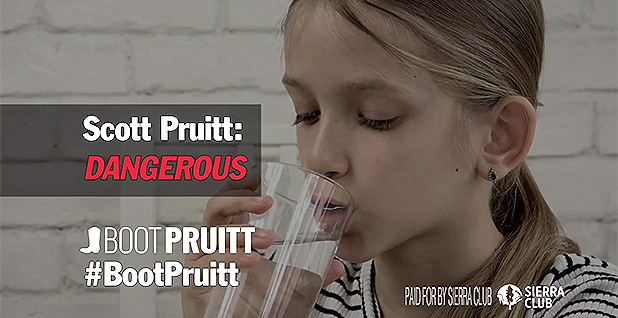 The ad highlights Pruitt’s critical comments of Trump during the 2016 campaign — calling Trump an "empty vessel" when it comes to the Constitution and rule of law — as well as the EPA chief’s penchant for first-class travel. The ads will air today, tomorrow and Friday.

Environmental groups are looking to trigger Trump into taking action. The Sierra Club even tweeted at Trump directly this morning with a link to the ad, saying, "Hey, @realDonaldTrump did you see this on @foxandfriends this morning?"

"Every audience deserves to hear what Scott Pruitt is doing to our air, our water, and our health — even Donald Trump," said Michael Brune, the Sierra Club’s executive director, in a statement.

"Pruitt is endangering families and wasting taxpayer dollars. That would be enough to get him fired twice in any normal administration. But insulting Trump? We don’t think that’s something even he can ignore. There’s no question that [it’s] past time to boot Pruitt."

EPA spokesman Jahan Wilcox suggested the campaign to oust Pruitt is a waste of resources.

"A campaign funded by the Sierra Club running ads on MSNBC and ‘Morning Joe’ attempting to influence President Trump may not be particularly successful. But please don’t take my word for it; spend your money," Wilcox told E&E News.

The coalition, which includes the Environmental Defense Fund, League of Conservation Voters and Natural Resources Defense Council, among other groups, also set up a website. The groups are asking visitors to sign a petition to be sent to Pruitt asking him to "resign immediately."