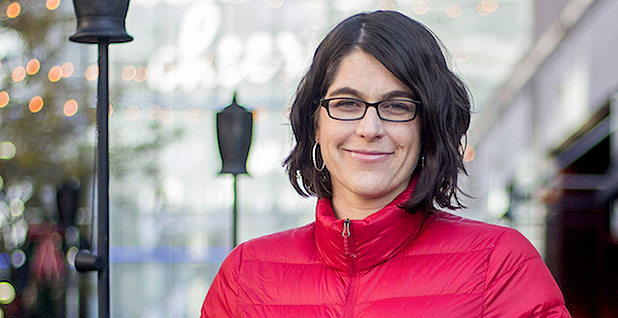 The 39-year-old mother of two young boys who grew up on a rural farm in northern Ohio is front and center in the U.S. District Court for the District of Columbia lawsuit calling Pruitt’s directive on advisory boards arbitrary, capricious and blatantly political (E&E News PM, Dec. 21, 2017).

Says Wilson, "I didn’t feel like I had a choice. Science is being attacked. There are people in the government saying things that are unethical — probably illegal. If you’re in a position to do something, you should."

Since filing the lawsuit, Wilson says, she’s received "nothing but love mail." Emails, she says, have come from across the country and abroad supporting her positions. She’s received handwritten cards, including one that reads, "I will resist, I will persist." One person called to say Wilson provided a lesson in "doing the right thing" for a teenage daughter.

As one of many scientists dismissed from EPA’s advisory boards under Pruitt, Wilson doesn’t expect to regain her position on the EPA board. The legal brawl will likely last long after the end of September, when her current term is slated to end.

Instead, she’s pushing back on what she sees as Pruitt’s attempt to replace scientists who could challenge his deregulatory agenda.

I grew up on a farm in northwest Ohio, in a very rural community. My address was Rawson, Ohio, which is west of Findlay. My parents were schoolteachers; my dad’s a farmer. My family had been there for generations. My grandfather was a dairy farmer, but the majority of the farm as I was growing up was corn and soybeans; it’s a conventional commodities farm.

We’re outdoorsy people. We go hiking, camping. I have two young sons at home. My husband is a mountain climber, too; he’s "Mr. Risk." He does glacier mountaineering; that’s his legitimate hobby.

What’s your favorite spot for hiking in Ohio?

Climate adaptation. So a lot of what I’m looking at in the agricultural systems is the idea that the way we manage systems isn’t good enough anymore, given the changing conditions. In the Midwest, that’s bigger variability in spring rains and warmer temperatures from the lake in the summer, which is creating these harmful algal blooms.

I’m from a rural community; I’ve gotten into some interesting conversations with family and friends about things like climate change.

You’ve been a member of the EPA’s Science Advisory Board since 2015. Are you still on?

Unofficially, I’m not on the Science Advisory Board.

If you go to the website and look at the current list of members, it’s the new list that came out end of October, beginning of November when the administrator released the new directive about conflict of interest.

But I’ve never officially heard anything from them on that. I received a blanket "thank you for your service" email back around Halloween. That’s when I replied and the story came out about the EPA essentially putting people in the position of having to step down or give up their grants.

I don’t know when the next meeting is; I would assume they would plan to meet late winter, early spring, based on past patterns of meetings. Those are publicly announced. … I’m sure I won’t be personally informed of it, as I’m not officially on it.

I guess it depends on when it is and what else I have going on. If I have the ability to show up, with my teaching schedule and other commitments, I may just do it. I assume if I do, they’ll just say, "You’re not allowed to be here."

It’s a general science advisory board, so we get asked to comment on a wide range of issues, of which not everyone will have specific expertise. At the end of the day, they don’t have to do anything with our advice. We don’t make policy; we just comment on the science behind any decision the agency is contemplating, and they can do what they want with that advice.

I, for example, served as a lead reviewer on the models that informed the 40 percent reduction targets that were placed out there for Lake Erie in regard to phosphorus concentrations. I’m not a physical scientist; I’m a behavioral scientist, but I work on integrated models looking at farmer decisionmaking, nutrients and water quality.

Taking me off that project in some ways would kill what they promised to do on that project. To me, that’s a bigger ethical issue.

No. I typically don’t apply for EPA funding. Most of my funding is through the [Department of Agriculture].

I’m not a lawyer, and I don’t know all the avenues for doing this, but the logic behind this is it’s perhaps the only way to overturn a directive like that, to take it to court and argue that essentially conflict-of-interest policies were already in place.

So if there is a legitimate conflict of interest, whether that’s based on having EPA funding or something else, that we already had processes in place to control for that. So to then pass this directive that says having agency funding is this blanket conflict of interest, again, arbitrary and capricious, unnecessary.

It implies, in my opinion, there’s something else going on. The intention behind it isn’t as honest as it claims to be.

From what I’ve heard, no one else was really willing to get involved in the lawsuit, which surprised me a little bit. I know in one particular person’s case, their institution basically said, "This isn’t in the interest of our institution, and we don’t want you to do it"; it was a smaller institution. In some of the other cases, I was surprised people weren’t willing to stand up for this and get involved.

I’m doing this as an individual, not as a representative of Ohio State, so they’re not going to tell me I can or I can’t do it; they don’t really see it as their business. But they’ve been very personally supportive of me doing it.

Isn’t it Pruitt’s prerogative to pick and choose who he wants?

The administrator has always had the right to not renew someone for a second term, and to me, that makes sense. In the past, the status quo has been to keep people for two terms; he clearly is acting on his ability to not do that. As soon as a term ends, he’s been getting rid of people this past year.

What becomes nefarious in the eyes of a lot of people is he’s gone a step farther, created this pseudo-conflict-of-interest policy that is repetitive, redundant, unnecessary, which I would probably go further and say is unethical. He’s looking for ways to get more people off the board to replace them with people he thinks are going to promote his current agenda.

I actually did some homework talking to our legal counsel at the university, with an environmental law professor here familiar with these sorts of things. … Most of the feedback I got was that it’s quite legitimate, and some of the individuals, like Mike Burger at Columbia University [Law School], who originally put these ideas out there, are well-respected and thoughtful people in the field.

I have not. Not really my thing. I’m a little personally opposed to lawsuits. I think the world is a little sue-happy, if you will, and that seems to be the first place people turn.

When I first signed on, I made clear I’m only doing this because I want that policy overturned; I think it’s an attack on science.