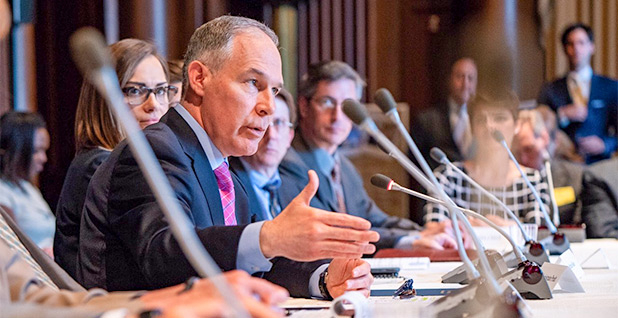 EPA Administrator Scott Pruitt during an event in May. @EPAScottPruitt/Twitter

Lingering discontent over EPA Administrator Scott Pruitt’s multiple ethics scandals may boil over in a pair of key Senate committee markups this week.

Democrats may attempt to capitalize on corn state Republicans’ discontent with Pruitt over the renewable fuel standard this morning in the Senate Agriculture Committee’s markup of the 2018 farm bill.

A lobbying group that opposes Pruitt’s moves on biofuels said yesterday that Ohio Democrat Sherrod Brown is considering an amendment that would declare it the "Sense of the Senate" that President Trump should dismiss Pruitt for "decisions that run counter to the agricultural interests of the United States."

In a brief interview, Brown said yesterday he had "nothing planned for sure" on Pruitt. His office did not respond to a request for comment.

But if offered, such an amendment could garner support among GOP members of the Agriculture panel, which includes Iowa’s Chuck Grassley and Joni Ernst, both of whom have waged a public war against Pruitt in recent months over the direction of the RFS program (E&E News PM, June 6).

While that bill does not include language sought by Sen. Tom Udall (D-N.M.), the ranking member on the Interior-Environment Appropriations Subcommittee, related to Pruitt’s ethics woes, Chairwoman Lisa Murkowski (R-Alaska) said yesterday she is still in discussions with her counterpart on the matter.

Udall yesterday described his provision as one that would "make it a violation of appropriations law to use federal funds to break ethics rules and standards," adding that he was "appalled at the level of ethics scandals plaguing this administration, especially at the EPA" (Greenwire, June 12).

Murkowski declined to discuss in detail what Udall’s provision would have done but said she wasn’t opposed to its intent.

"I think he wanted to try to find a way within the appropriations bill to address some of the concerns that have been raised through the media about some of the ethical allegations," she told E&E News. "So we’re continuing to discuss, before we go to markup on Thursday, to see if we can’t all come to agreement on language that might work."

Murkowski also reiterated her concern that Pruitt’s ongoing scandals are a distraction from the work he’s doing at EPA, which she called "the big issues."

However, Murkowski also noted she retreated from a host of provisions she would otherwise have pushed in the legislation in the interest of getting the particularly controversial spending measure to the floor.

"I have stood down on a lot of thing in this Interior bill because I wanted to be true to the commitment about our desire to avoid anything that may be viewed as a poison pill or authorizing on appropriations," Murkowski told reporters. "So I’m trying to be fair and judicious with all of that and still give folks an opportunity to weigh in."

Sen. Patrick Leahy (D-Vt.), the ranking member on Appropriations, said yesterday he’s working with Republicans to keep "poison pill" riders off spending bills in hopes of getting them signed into law.

Leahy said he had not seen a specific Pruitt amendment but did not rule out supporting it based on the administrator’s ethics lapses.

"I cannot think of any Cabinet member in either a Republican or Democratic administration that has done as many egregious things as he has, and he seems to be immune. It seems to be what the administration wants, so I don’t think there is anything you can do to embarrass him," Leahy told reporters yesterday.

He also continued to mock Pruitt for flying first class for government travel.

"At one of the hearings, we talked about how he had to fly first class for security. I said you could walk on there by yourself, no one will know who you are — a little guy walking on with some papers under his arms," he added.