Pruitt has a history of science spats 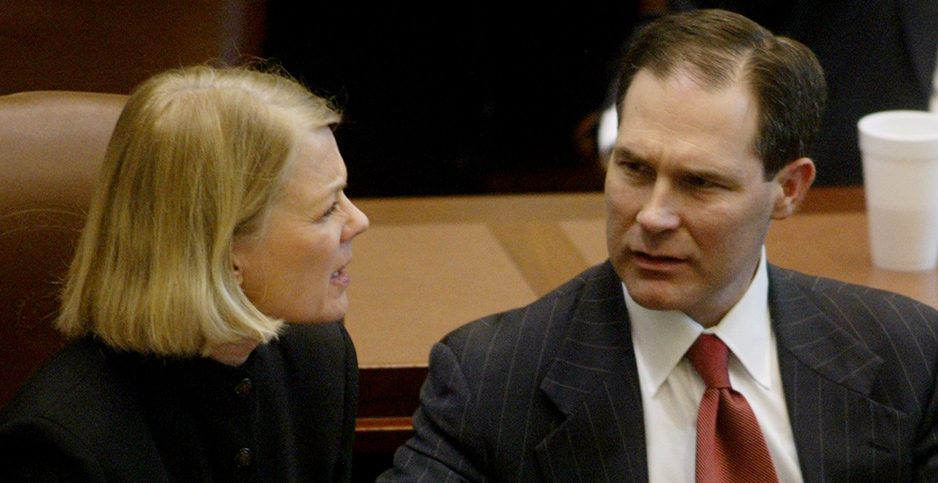 Scott Pruitt waded into political battles over abortion and evolution during his stint as an Oklahoma state senator. Pictured: Pruitt in the Oklahoma state Capitol in 2004. Sue Ogrocki/Associated Press

Scott Pruitt wants a public debate over the prevailing scientific view that humans are warming the planet at an unprecedented pace.

This isn’t the first time the U.S. EPA boss has challenged a scientific body of research to advance a political cause.

It’s a technique that has garnered him political acclaim on the right since the beginnings of his career as an Oklahoma state legislator nearly two decades ago, according to people familiar with his career.

Pruitt has recently said that global warming may in fact benefit humanity. He says it’s "arrogant" to claim that humans know the ideal surface temperature for the planet in 2100, which is when scientists say some parts of the world will see catastrophic changes. Since taking the helm at EPA about a year ago, he has focused on scaling back climate science at the agency, which has removed hundreds of webpages related to climate change. He has also remade the agency’s Science Advisory Board, making way for more industry-connected researchers to influence policy.

They point to controversial bills Pruitt backed as a state senator representing Broken Arrow in the Oklahoma Legislature. He pushed legislation that would have required abortion doctors to tell patients that abortions could elevate breast cancer risks. He also called evolution "a scientific theory, not a scientific fact," and supported a bill that would have allowed teachers to instruct children that evolution is merely a theory.

But Pruitt learned a valuable lesson in those fights, said former Oklahoma Democratic Party Chairman Mark Hammons. It doesn’t matter if the weight of evidence is on your side or even if you win or lose in court or in the statehouse, Hammons said. It’s about harnessing the political fight to serve your own ends.

"It does not appear that Scott Pruitt has any interest in scientific reality or any other reality other than political reality," he said. "If there’s political capital to be made by an argument, then he’s going to make that argument, and the truth be damned and science be damned."

Pruitt was first elected to the state Legislature in 1998 and served until 2006, when he unsuccessfully ran to be Oklahoma’s lieutenant governor. During his time in the Statehouse, he was a formidable presence, rising from Republican whip to assistant Republican floor leader.

His tenure occurred as Oklahoma — which had seen a century of Democratic dominance — was tilting sharply toward the right. Republicans came to dominate all state offices during Pruitt’s time in Oklahoma politics, which included his 2010 election to become attorney general. Now, Oklahoma, which went 65 percent for President Trump in the 2016 election, is dominated by Republicans, who hold the governorship, both Senate seats, all five House seats and supermajorities in both chambers of the state Legislature.

One of Pruitt’s first major spats over science was in the early 2000s.

He pushed a bill that would have allowed for evolution to be taught as a theory. The effort came during the George W. Bush administration, when conservative Christians led a charge in jurisdictions around the country to make it easier for teachers to position evolution as essentially on par with other theories such as creationism, which holds that God created the Earth.

The bill backed by Pruitt was called the "Oklahoma Educator Protection Act," and called for a disclaimer in textbooks that would have framed evolution as a theory, rather than a scientific fact. It would have also protected teachers from lawsuits that could have been brought if they taught creationism as being on par with evolution. Pruitt told the Tulsa World that the "language is important in a sense of helping students understand that the theory of evolution is just that — a theory."

The bill ultimately failed, and one prominent Democratic lawmaker warned that Pruitt believed "his religion ought to be the dominant religion and that his religion ought to say to the rest of the religions what should be in the textbooks of our public schools," according to the Tulsa World.

Pruitt is a devout Christian whose Twitter biography as Oklahoma’s attorney general described him as a "Husband, Father, Christ Follower."

An EPA spokesman did not respond to requests for comment.

Pruitt also waded into the debate over abortion during his time as a state senator.

Under a bill he supported, doctors would have been required to tell a woman seeking an abortion that it could increase her risk of breast cancer, an assertion that has been repeatedly debunked by mainstream health researchers.

As proof that his legislation was necessary, Pruitt held up a study from the Journal of American Physicians and Surgeons, a controversial journal that has also published other scientifically discredited theories such as the link between autism and vaccines and between leprosy and immigrants who are in the country illegally. Pruitt’s bill also would have required doctors to tell women that the fetus they were seeking to abort would feel pain, which researchers do not believe is true in the early stages of pregnancy, when the vast majority of abortions happen.

Former Oklahoma State Senate President Cal Hobson, a Democrat, fought to kill a number of Pruitt-backed bills before they got to the floor for a vote.

Hobson sees Pruitt as an embodiment of the what’s wrong with government now, where two sides stake out extreme positions. Hobson told E&E News in an interview last week that such politicians are focused not on crafting successful policy, but on short-term political victories that yield more lawsuits than lasting laws.

Pruitt didn’t craft any meaningful legislation during his tenure as a state lawmaker, Hobson said, but he did intuitively understand that veering toward extremes bought him political capital. Plus, he had a friendly demeanor that allowed him to artfully spin political spats as constitutional ones.

"He didn’t learn that lesson when he came to the Legislature; he knew that lesson and simply fell in line and implemented it, and he is articulate, unlike a lot of our legislators," Hobson said. "He is a good word mechanic and can explain an unconstitutional provision succinctly in constitutional terms that don’t exist."

Pruitt’s GOP colleagues in the Senate recognized that he had energy and charisma necessary to advance their goals, said Frank Keating, a former Republican governor of Oklahoma.

In the Sooner State, people are conservative on social issues and strongly support the oil and gas industry, Keating said. Pruitt embodies those values, he added.

"In Oklahoma, Scott was never considered a legislator who was off-plumb, he was considered fairly mainstream, very bright and well-educated," he said.

Pruitt is widely rumored to be considering a run for a future political office, perhaps as governor or senator in his home state.

Oklahoma’s shift from blue to red happened very quickly, and it shouldn’t be viewed as permanent, said Keating, who was in office from 1995 to 2003 and was only the third Republican governor in the state’s history.

Frustration has been mounting with Republican lawmakers as the state has trimmed oil and gas taxes and is now grappling with a billion-dollar budget hole that has seen the school week in some public school districts cut down to four days. Democrats have picked up a few Republican state seats in the last year.

Right now, Oklahoma is probably "more comfortable" as a Democratic state, Keating said, even if it is conservative on social issues. Voters do care about environmental issues but would probably react more strongly to cleaning up Superfund sites than to a climate science debate, he added, if Pruitt decides to return and make a run for governor or senator.

"Washington is not a place to be from; Washington is a place to leave," Keating said. "If Scott becomes a Beltway type, people will say, ‘Why don’t you stay there?’ If, on the other hand, if what he is doing is fighting for the states to have a set role in environmental policy, people are going to be saying, ‘That’s right; that’s what he ought to be doing.’"

Ultimately, Pruitt’s efforts to create a debate around science likely won’t shift public opinion at all, since polls have registered little significant movement on climate change in years.

Pruitt would likely view the debate itself as another way to rally his base, said Hammons, the former state Democratic Party chairman. It could also be important how Pruitt tries to sell his actions in Washington to the voters at home in Oklahoma, Hammons added.