Pruitt in for ‘pretty rough’ day on Hill 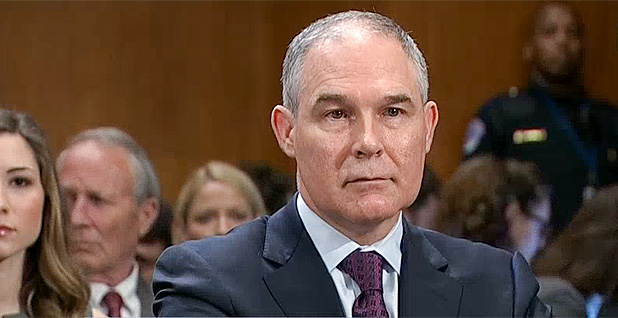 The political maelstrom that has surrounded EPA Administrator Scott Pruitt for weeks will arrive on Capitol Hill today, when the beleaguered agency chief makes a pair of appearances before House committees that may well determine his future in the Trump administration.

Lawmakers from both parties yesterday offered a variety of opinions about whether Pruitt’s alleged misdeeds warrant his resignation or firing, but there was general agreement that he’s going to get hammered on ethics issues when he appears before subcommittees of the House Energy and Commerce and Appropriations committees.

Rep. John Shimkus (R-Ill.), who leads the Energy and Commerce Subcommittee on Environment — Pruitt’s first stop — said the hearing’s focus will be on policy and Pruitt’s "stewardship" as administrator.

Shimkus declined to comment on the story, which he hadn’t read, but cited his own experiences as a West Point graduate when asked whether passing the blame was an acceptable defense.

"Leadership is defined by your ability to get your team to do what you want to do, not because you force them, but you lead them," he told reporters. "But also leadership is you’re responsible for all that your unit does or fails to do. That’s just basic leadership."

Rep. Joe Barton (R-Texas), the former chairman of the Energy and Commerce Committee, said he backs Pruitt’s performance "job-wise" and seemed willing to give him a pass on security expenses and the infamous soundproof phone booth he had installed in his office.

"You always want high government officials to spend the resources appropriately," Barton said. "He has had a lot of death threats, so I don’t have a problem with his security costs. I don’t really have a major problem with his telecommunications setup."

Energy and Commerce Democrats yesterday made another of many investigation requests on Pruitt. This time, they asked the Office of Special Counsel to look into agency staff moves.

Rep. Kevin Cramer (R-N.D.) signaled that he plans to keep his allotted time to the hearing’s stated purpose — the fiscal 2019 budget request.

"In my view, we don’t have these Cabinet members in front of us often enough to spend a lot time asking about sensationalist issues when there are real serious and budget policy issues," he said.

Cramer also offered a full-throated defense of Pruitt, recalling a recent conversation in which he told the EPA chief, "We really need you."

"You are the first EPA administrator in my adult lifetime who has exercised and understood federalism," Cramer recounted.

"I want him to know I back him up and support his policies, and said his great sin so far has been to do everything you said you would do and the president asked you, and for that you are being scrutinized."

Rep. Paul Tonko of New York, the top Democrat on the subcommittee, ticked off a host of issues the minority wants to quiz Pruitt on.

Rep. Tom Cole (R-Okla.), a member of the Interior and Environment Appropriations Subcommittee — Pruitt’s second stop — said the administrator called him last week to ask about the hearing.

"I said it’s going to be pretty rough, be ready," Cole told reporters, adding that he urged Pruitt to reach out to other members.

Cole said he plans to focus on policy questions, noting that he was confident that Pruitt "is an ethical person."

"I have just known him too long to think anything else," the congressman said, adding that he believes the agency chief will rise to the occasion.

"Scott is actually a very good witness as a rule," he said. "He’s smart, he’s well-informed, he’s pretty controlled … so I think he’ll do a good job."

Rep. Ken Calvert (R-Calif.), who chairs the Interior-Environment subcommittee, similarly expressed confidence in Pruitt, whom he spoke to last week.

"He’s a very capable attorney," Calvert said yesterday. "I think anybody will say that he’s spent a lot time in very confrontational courtrooms in the past. I am sure he will do fine with these hearings."

Pruitt’s appearances today will be closely followed by the White House and members of both parties on both sides of the Capitol, given the steady drumbeat of calls for his ouster.

Calvert shot down the notion that Pruitt will resign on his own. "Don’t expect that," he said.

Rep. Mike Simpson, who sits on the Interior-Environment panel, said Pruitt can expect "tough questions" from Democrats today about "the ethical stuff."

However, the Idaho Republican said that he plans to keep his line of questioning to the fiscal 2019 proposal. "It’s a budget hearing," Simpson told reporters. "And that’s what I’ll ask him about."

When asked whether he had concerns about Pruitt’s spending habits, Simpson said he was "less fired up about some of the travel" but found the installation of a soundproof communications facility costing about $43,000 in Pruitt’s office "a little weird."

The Republican yesterday wondered aloud to reporters, "Who needs a cone of silence in an office?" likening the "phone booth" to something out of the 1960s secret agent TV satire "Get Smart."

"Maybe there is a good reason for that, I don’t know," Simpson said.

The Idaho lawmaker was also surprised when reporters told him that EPA allegedly turned down the White House’s offer to help prepare Pruitt for his close-up with members today, according to various news reports.

"That’s interesting," Simpson said with a laugh. "Whether you take it [advice] or not, at least seek their input," he said.

"I think he is safe," Meadows told reporters.

Cramer, who served as an informal adviser to Trump during the presidential campaign, offered a similar assessment.

Sen. Lisa Murkowski (R-Alaska), who will host Pruitt next month before the Senate Interior and Environment Appropriations Subcommittee she chairs, said the EPA chief should be "honest and open, and he needs to state why he has approved some of the things that he has done that have raised the questions."

"I don’t think it’s going to be helpful for him to be evasive about it," she added yesterday.

"When in doubt, tell the truth, you’ll amaze your friends and confound your enemies," he told E&E News yesterday. "So I’d just like him to tell the truth for a change."