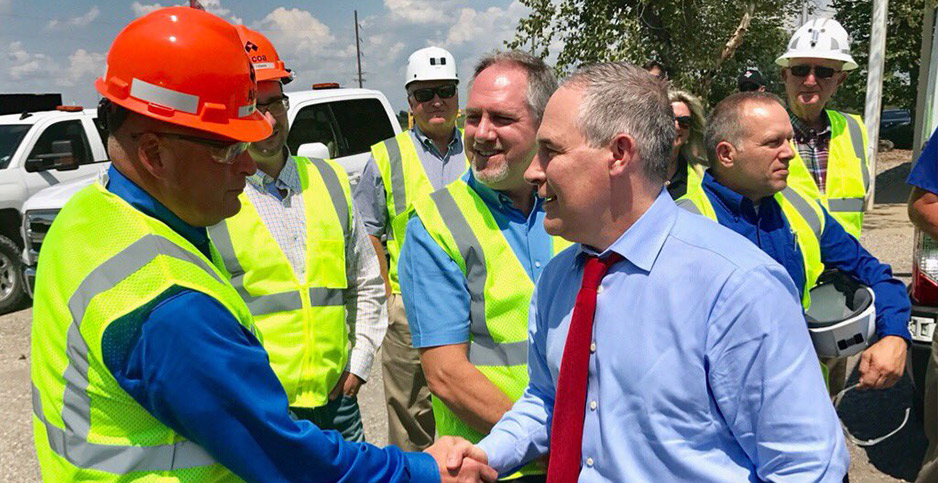 U.S. EPA Administrator Scott Pruitt has tasked the Office of Policy with finding a way to expedite permitting at the agency. @EPAScottPruitt/Twitter

In a memo obtained by E&E News, Pruitt directs the head of EPA’s Office of Policy to coordinate reviews of permitting policies "to ensure consistency and conformance with statutory authority and agency priorities, and to flag policy provisions that contribute to unnecessary processing time delays."

The EPA policy shop will lead "agency-wide efforts to conduct recurring periodic review of permitting policies and guidance governing the processing and issuance of federal environmental permits," according to the March 8 memo that Pruitt signed.

The reviews will be coordinated with the general counsel and appropriate program offices to "identify policy provisions that deviate from statutory authority and that may contribute to unnecessary permit processing delays" as well as work with the relevant staff "that are most directly responsible for the permit program to implement appropriate changes."

In addition, the head of the policy office will "serve as the advocate and central point of contact for all federal agencies on EPA permits."

An EPA spokeswoman told E&E News that shifting duties to the policy shop was part of the agency’s reorganization.

"These moves will directly support Administrator Pruitt’s priorities for expediting federal infrastructure projects and streamlining permitting processes, providing stakeholders with more clarity and certainty on their projects without sacrificing environmental results," she said.

Samantha Dravis, the EPA policy chief, worked with Pruitt when he was Oklahoma attorney general as a policy director and general counsel at the Republican Attorneys General Association. She was also president of the Rule of Law Defense Fund and legal counsel at Freedom Partners.

"This gives the Office of Policy and Samantha Dravis a little more scope and a little more power. It creates a more direct line to Administrator Pruitt on some cross-cutting issues like NEPA and permitting," the former official said.

The memo follows the Trump administration’s release last month of its infrastructure plan, which includes sweeping changes to NEPA. As part of that plan, the administration is also asking Congress to take EPA out of the Clean Water Act permitting process, which it currently shares with the Army Corps of Engineers (E&E News PM, Feb. 12).

The reviews will include policies affecting federal permits issued by EPA itself, as well as those that are issued by state and tribal governments.

Accelerating permitting-related decisions is one of six agency "priority goals" Pruitt outlined for the agency in fiscal 2018 and 2019 as part of EPA’s strategic plan.

"EPA is committing to speeding up approvals of permits and modifications to create certainty for the business community, leading to increased jobs and economic prosperity, and streamlining permit renewals, which incorporate up-to-date information and requirements more quickly, thereby improving environmental protection," the plan says.

EPA has also put forth an agency "reform plan" that emphasizes "speeding up environmental permitting."

Pruitt’s memo directs the Office of Policy to implement an online "electronic permitting" system to track permits’ status and to facilitate permit authorization and environmental projects covered by Title 41 of the Fixing America’s Surface Transportation Act. That law condenses the National Environmental Policy Act processes for projects costing more than $200 million and involving more than two regulatory agencies for projects from certain sectors like surface transportation and energy transmission.

In his memo, Pruitt clarifies that, with the Office of Federal Activities reorganization, the Office of Policy will now be delegated several responsibilities, including reviewing environmental impact statements for Clean Air Act compliance and checking Department of Energy actions.

The former EPA official said as Trump appointees at the agency try to speed up permitting, they may weaken environmental safeguards.

"The language is neutral. This memo could have been written by any administration, but under this administration, it will likely be used for permitting streamlining and probably relaxing of environmental requirements," the former official said.