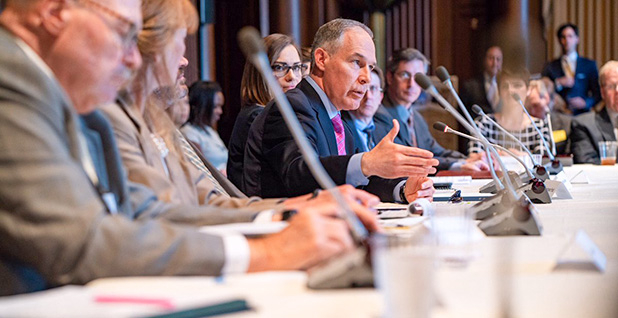 EPA Administrator Scott Pruitt is moving to revamp the agency’s machinery for setting air quality standards for a half-dozen key pollutants, with a goal of completing two particularly charged reviews before the conclusion of President Trump’s current term.

In a memo released this morning laying out five "principles" for handling of the National Ambient Air Quality Standards (NAAQS), Pruitt said he was ordering agency staff to launch a fresh assessment of the ground-level ozone standard so that it can be wrapped up by a statutorily required deadline of October 2020.

EPA also intends to accelerate an ongoing assessment of the particulate matter standards, currently scheduled to end in 2022, so that it will conclude in December 2020, Pruitt indicated.

Among a host of other changes laid out in the 11-page memo, Pruitt seeks to streamline procedures for evaluating scientific research used to determine whether current or proposed standards are adequate to protect public health, and differentiate between "science and policy considerations" during reviews of the standards.

He also wants to require EPA to issue implementation regulations at the same time it orders changes to the thresholds for ozone, particulate matter and the four other "criteria" pollutants listed in the Clean Air Act.

The Clean Air Scientific Advisory Committee, a seven-member panel that offers outside expertise to EPA during the reviews, would have to examine "adverse" economic and energy effects that might result from revisions to the standards for the six pollutants. That step is backed by industry groups but opposed by environmental and public health organizations.

The planned changes come less than a month after Trump ordered EPA to study the NAAQS review process, a cornerstone of the Clean Air Act.

They will "reform" standard-setting procedures "in a manner consistent with cooperative federalism and the rule of law," Pruitt said in a statement today.

"Getting EPA and its advisers back on track with Clean Air Act requirements, statutory deadlines, and the issuance of timely implementation rules will ensure that we continue the dramatic improvement in air quality across the country."

Critics, while still digesting the potential impact this morning, denounced the effort as an attempt to undercut the act’s requirement that pollution standards be set to protect public health with an "adequate margin of safety."

They also linked it to two other Pruitt initiatives: changes to membership requirements for EPA advisory panels announced last fall and a recently published proposal that would limit the types of studies the agency could tap in crafting new regulations.

"We’re seeing a coordinated effort," said Paul Billings, senior vice president for advocacy at the American Lung Association, adding that the group plans to fight the changes outlined in the memo "with all tools available."

Taken together, the changes, undertaken with no advance notice or opportunity for public comment, would amount to a major overhaul of the NAAQS review process.

Under the act, EPA is supposed to assess the standards for the six pollutants, which also include airborne lead, nitrogen dioxide, sulfur dioxide and carbon monoxide, every five years. In practice, the agency rarely, if ever, meets that timetable.

"Those delays result in uncertainly as well as lost opportunities for implementing the NAAQS to protect the environment in a manner compatible with a robust American economy," Pruitt said in the memo.

But by ordering a new review of the ozone standard, last tightened to 70 parts per billion in October 2015, Pruitt is setting a start-to-finish timeline of less than 2 ½ years.

Litigation surrounding that 70 ppb threshold is, meanwhile, unresolved. A coalition of industry groups argues that EPA acted arbitrarily in lowering it from the previous level of 75 ppb; environmental and public health organizations, including the lung association, say the scientific evidence warrants cutting it as low as 60 ppb.

At EPA’s request, however, the consolidated litigation, playing out before the U.S. Court of Appeals for the District of Columbia Circuit, has been on hold since April 2017 while the agency reconsiders its position.

EPA air chief Bill Wehrum did not immediately reply to an email asking when the agency plans to begin the new review; the agency’s latest six-month regulatory agenda, released yesterday, does not mention it.

The last review of the particulate matter standards ended in 2012. Since then, a mounting body of scientific evidence has suggested the current limits are not strong enough to adequately protect public health.

A Harvard University study published last summer, for example, found that prolonged exposure to rising levels of fine particulates — even at levels below EPA’s current annual level of 12 micrograms per cubic meter of air — led to more hospital stays.

Industry groups, worried about the compliance costs that would accompany particulate matter limits, have been watching warily.

Pruitt did not give a precise rationale for now setting a December 2020 deadline for completion of the current assessment, but said EPA "should seek to identify efficiencies in the simultaneous reviews" of the ozone and particulate matter standards.

By that point, the Clean Air Scientific Advisory Committee, whose seven members traditionally come mainly from academia, will likely be fully controlled by Pruitt appointees. Under the new membership criteria for EPA advisory committees rolled out last October, anyone with a current EPA grant is barred from serving.

Three of the board’s seven members have since been appointed by Pruitt. The terms of the other four all expire later this year; EPA has already sought nominations for their replacements.

Among the three members named by Pruitt is the board’s chairman, Tony Cox, a Colorado consultant whose clients have included the American Petroleum Institute. Cox opposed EPA’s 2015 decision to tighten the ozone standard.

In an email to E&E News last month, Cox said he had not decided on whether the particulate matter standards need to be changed.