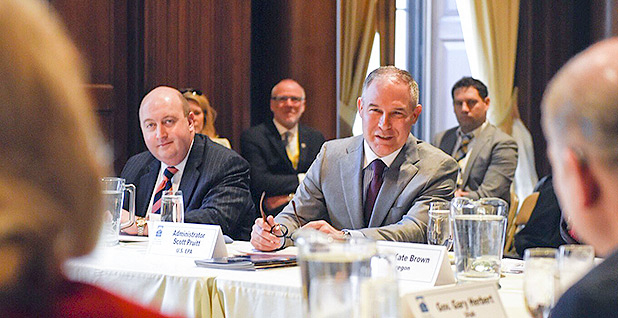 Ryan Jackson, left, and EPA Administrator Scott Pruitt during a meeting with Western governors. Photo courtesy of @EPAScottPruitt via Twitter.

Jackson worked on the team helping to guide Pruitt through the Senate confirmation process, and he will now be central to guiding the Washington newcomer around Capitol Hill. He was at Pruitt’s side over the weekend as the EPA chief met with Western governors, as shown by several photos Pruitt posted on Twitter.

Among the jobs Jackson held in Inhofe’s office were counsel and chief counsel to EPW and legislative director and chief of staff in Inhofe’s personal office. He also spent stints away from Capitol Hill as an assistant district attorney in Oklahoma and as associate director for the Oklahoma Farm Bureau. He hails from Oklahoma City and studied political science at the University of Oklahoma before getting a law degree from Oklahoma City University.

Jackson is among several Inhofe alumni who have been hired by the Trump administration to serve in key energy and environmental jobs (Greenwire, Feb. 10).

Another former Inhofe staffer has been rumored to be in the running to become EPA deputy administrator under Pruitt, sources told E&E News earlier this month.

Andrew Wheeler, former EPW staff director and chief counsel under Inhofe, has met with Pruitt about the No. 2 job at EPA, the sources said. Wheeler, who is now at FaegreBD Consulting, was an energy adviser to the Trump campaign. Another prospect for EPA deputy administrator is Donald van der Vaart, former secretary of the North Carolina Department of Environmental Quality, the sources told E&E News.

Being EPA’s chief of staff is a demanding, sometimes frantic job, according to officials who have held the post in past administrations.

Gwen Keyes Fleming, who was Gina McCarthy’s chief of staff for several years, had an office attached to McCarthy’s on the third floor of the William Jefferson Clinton building in downtown Washington and met with the administrator several times a day.

Michael VandenBergh, who served as the top aide to former EPA Administrator Carol Browner, said in a 2013 interview that being EPA’s chief of staff is "like being an air traffic controller for management, regulatory and budget issues."

Peter Robertson, who was also chief of staff to Browner, said the job is about "keeping the trains running on time" as well as the "care and feeding of the administrator, making sure that things are running right." He added in the 2013 interview, "There’s always, every single day, a certain amount of crisis management that you have to do" (Greenwire, Dec. 2, 2013).