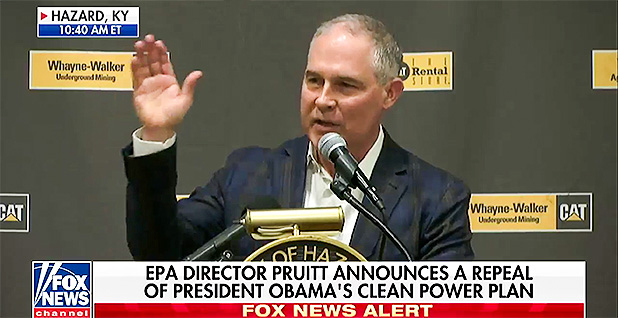 Scott Pruitt will sign a proposal tomorrow that would eliminate the Obama administration’s signature climate change rule, the U.S. EPA administrator said today during a speech in Hazard, Ky.

"Tomorrow in Washington, D.C., I’ll be signing a proposed rule to withdraw the so-called Clean Power Plan of the past administration, and thus begin the effort to withdraw that rule," Pruitt told an industry group, where he spoke along with Senate Majority Leader Mitch McConnell (R-Ky.).

Pruitt’s remarks won him a standing ovation from the industry crowd. "It’s good for eastern Kentucky to hear that, right?" he said. "No better place to make that announcement than in Hazard, Ky."

The move to repeal the Obama-era rule has long been expected. President Trump signed an executive order earlier this year directing Pruitt’s agency to review the regulation, which sought to cut power plants’ carbon dioxide emissions 32 percent by 2030.

EPA will argue in its proposal that the Clean Power Plan "exceeds the EPA’s statutory authority," according to a copy of the proposal that was leaked to several media outlets last week. The administration "has not yet determined" whether it will issue a replacement rule (Greenwire, Oct. 6).

Pruitt, who sued EPA over the rule when he was Oklahoma attorney general, slammed the Obama administration today during his remarks.

"The past administration was unapologetic. They were using every bit of power, every bit of their authority to use the EPA to pick winners and losers in how we generate electricity in this country. And that’s wrong," he said in remarks aired by Fox News.

"It’s Congress that passes legislation that gives us direction, that gives us our orders as far as how we administer that statute, it gives us the parameters. The last administration just simply made it up," he added.

Trump has been touting his administration’s plans to rescind the rule. At a rally last month in Huntsville, Ala., the president said of the Clean Power Plan, "Did you see what I did to that? Boom, gone."

But the rule won’t merely disappear once Pruitt signs the proposal to rescind it. Tomorrow’s move kicks off what promises to be a long regulatory process, while political and legal fights over the rule and a possible replacement will continue.

EPA will receive a flood of public comments on its plans to repeal the rule, which agency officials will pore over in the coming months. EPA is also expected to hold a public hearing on its proposal, which would likely draw a deluge of those both supporting and opposing the rollback.

Meanwhile, EPA is also expected to soon provide an update on its plans to a federal appeals court, where judges have agreed to temporarily halt legal proceedings over the Obama rule. Supporters of the Clean Power Plan will be looking for ways to challenge the Trump administration’s moves in court.

New York Attorney General Eric Schneiderman (D), who is defending the Clean Power Plan in court, today promised to sue over the repeal.

"I am proud to lead the coalition of states and localities defending the Clean Power Plan in federal court," he said in a statement. "If and when the Trump Administration finalizes this repeal, I will sue to protect New Yorkers and put a stop to the Trump Administration’s irresponsible and illegal efforts to turn back the clock on public health."

One battleground will be EPA’s number crunching. Critics have blasted the document that leaked last week as evidence that the Trump administration overplayed the costs of the Clean Power Plan while downplaying the health and environmental benefits (E&E News PM, Oct. 6).

"By repealing the Clean Power Plan, the Trump Administration will throw out an affordable, flexible, and life-saving plan to cut dangerous carbon pollution from power plants, giving the fossil fuel industry a free pass to keep polluting our air while our families pay the price," Sierra Club Executive Director Michael Brune said today in a statement.

Industry groups and others will be watching closely as EPA decides whether to issue a replacement rule. In the leaked proposal, the agency said that it "is considering whether it is appropriate to propose such a rule" and that EPA "in the near future" will ask for comment about what a replacement rule might look like.

The proposal suggests that if there’s a replacement rule, it would focus more narrowly on efficiency limits at specific power plants, rather than the broader approach taken by the Clean Power Plan.

Many industry groups have pushed the Trump administration to substitute the Obama rule with a narrower regulation, while others — including some of Trump’s most vocal allies in the energy sector — don’t want a replacement at all (Climatewire, Oct. 5).

"Our position has always been we want a full repeal," said Gary Broadbent, a spokesman for Murray Energy Corp. "And if they decide to replace it with something, we will review that." Murray Energy CEO Bob Murray is a close ally of Trump.