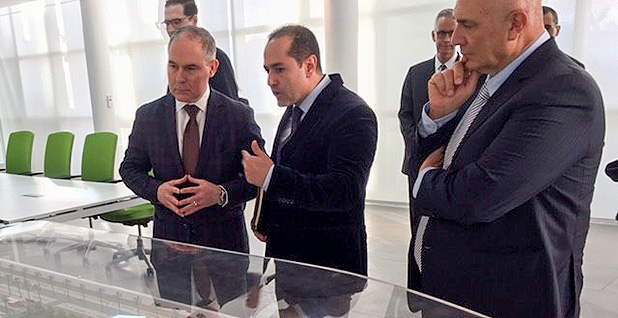 The EPA chief traveled to North Africa to meet with foreign officials, "update" an environmental work plan under the Morocco Free Trade Agreement with the U.S. and discuss Morocco’s interest in importing liquefied natural gas, according to a press release the agency sent last night.

"These meetings allowed us to directly convey our priorities and best practices with Moroccan leaders, as well as identify opportunities for continued cooperation, as our two countries further talks around the Environmental Work Plan," Pruitt said in a statement. "We are committed to working closely with countries like Morocco to enhance environmental stewardship around the world."

EPA said Pruitt met with Moroccan Secretary of State to the Minister of Foreign Affairs Mounia Boucetta to discuss collaboration between the two countries. He then met with Moroccan Minister of Energy, Mines and Sustainable Development Aziz Rabbah to "discuss new and ongoing areas of collaboration under the Free Trade Agreement and the country’s interest in importing LNG."

Pruitt also toured the IRESEN’s Green Energy Park in Ben Guerir, north of Marrakech, which houses laboratories that do research on solar photovoltaic and thermal energy.

"It’s a sad day when America’s top environmental protection officer is a salesman for fossil fuels," said David Doniger, director of the Natural Resources Defense Council’s climate program. "I think this is quite unusual. I’m not aware of prior examples of the EPA head turning himself or herself into a pitchman for the fossil fuel industry."

In the works is a White House effort to expand the use of domestic coal and natural gas abroad with cooperating countries and counterbalance a growing international anti-coal coalition that’s grown out of the United States’ inaction on climate change (E&E News PM, Dec. 11).

Driving the effort is White House energy aide George David Banks. Working under Banks on the National Security Council are Tristan Abbey, a former Republican staffer on the Senate Energy and Natural Resources Committee, and Mark Eshbaugh, according to sources.

LNG exporters are eagerly eyeing potential new business throughout India and Asia, where Trump has championed sales to China and other parts of Asia to generate jobs and reduce U.S. trade deficits. Cheniere Energy Inc. currently owns the only export plant in operation in the United States — the Sabine Pass LNG Terminal along the Gulf Coast.

It’s not clear from the EPA press release how interested Morocco might be in importing LNG. A net energy importer, Morocco has boosted renewable energy and efficiency in recent years to reduce its dependence on foreign fuel for electricity. As a signer of the Paris climate accord, the nation has set a goal of reducing its greenhouse gas emissions by as much as 32 percent by 2030.

The Trump administration appears to be pressing many levers — and looking for new ones — to spur more and faster LNG exports.

And Commerce Department officials stationed across a number of foreign embassies — including Portugal, Poland, Brazil and Croatia — are promoting domestic gas exports and looking for matchmaking opportunities, said Fred Hutchison, who leads LNG Allies, a group that advocates for expanding LNG shipments.