Pruitt proves not all scandals are equal for Trump 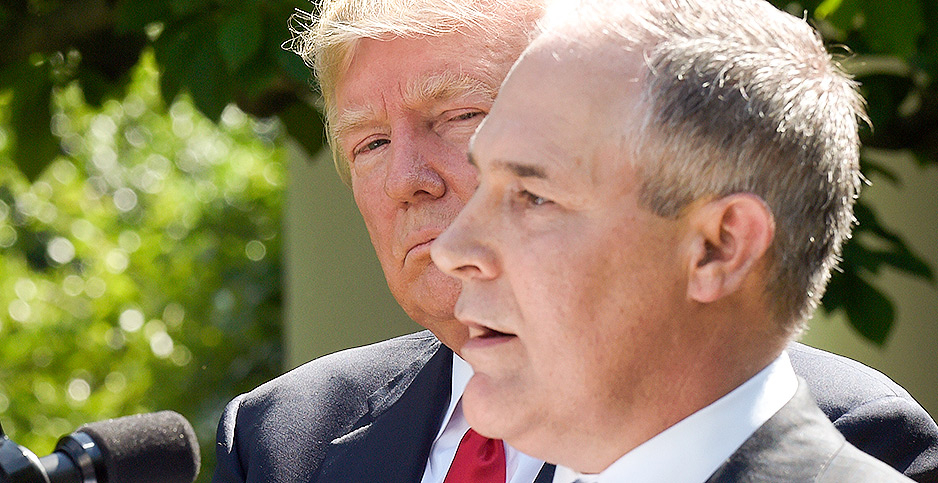 The narrative on President Trump is that he enjoys chaos, but not when his subordinates’ actions become distractions. His handling of EPA Administrator Scott Pruitt, therefore, is illuminating the trade-offs the president is willing to make, while also charting a road map for the embattled EPA chief to remain on the job.

Even Trump’s longtime friend had trouble explaining Pruitt’s staying power amid allegations that range from serious — using his high-profile job to inquire about a Chick-fil-A franchise for his wife — to the inane, such as sending aides to get Ritz-Carlton-brand hand lotion and a used Trump Hotel mattress.

"[Trump’s] history is of a person who runs a very tight ship with regard to any indiscretions," said Ed Russo, a friend and former environmental adviser on the president’s many business ventures.

So how does Trump’s managerial reputation square with Pruitt’s persistence amid many indiscretions?

But many sources familiar with the president’s thinking said the key difference between Pruitt and those ex-Trump administration officials is that Pruitt and the president are in lockstep on policy. Whereas the others were creatures of an establishment Republican variety, Pruitt has implemented Trump’s norms-shattering environmental agenda.

"I think the White House is terribly upset about all this stuff," said Dan Eberhart, a GOP donor and CEO of oil services company Canary LLC. "I think the problem is they’re not able to confirm anyone else as aggressive. I think he’s in there by default."

Trump has somewhat alluded to that himself, telling reporters earlier this month, "I’m not happy about certain things, but he’s done a fantastic job running the EPA, which is very overriding." That wasn’t necessarily the case with other now-former officials.

Sources noted Pruitt hasn’t flubbed any major policy pushes, which has kept him in Trump’s good graces. That distinguishes him from since-departed administration officials.

Price’s expensive private charter flights didn’t get him canned; it was the perception that he fumbled the vote to repeal the Affordable Care Act. Tillerson’s firing came months after allegedly calling Trump a "moron"; ultimately, the White House viewed Tillerson as a diplomatic freelancer. Shulkin’s cover-up in his decision to bill taxpayers for his wife’s ride to Europe wasn’t his last stand; his oversight of the VA had been questioned for months.

"Even though Pruitt has had a lot of negative headlines, he more than any other member of the Cabinet has been successful at fulfilling the Trump agenda," a former administration official said. "I don’t think a random headline here or there is going to take him down at this point. I think it’s going to take something that truly consumes the press."

That’s not to say the noise surrounding Pruitt has been completely separate from implementing policy. White House aides have called for his ouster. Many have started to question Pruitt and his agency’s judgment.

"It erodes support in the sense of you start thinking in terms of ‘Do I want to start working on something with EPA because are they going to be able to keep it buttoned up?’" a source close to the White House said.

Still, the source said the environmental opposition to Pruitt also has brought Pruitt and Trump closer together. While Trump doesn’t enjoy negative headlines, there’s a shared sense between Pruitt and the president of being unfairly targeted, the source said, who noted the EPA boss has gone to lengths to cultivate a relationship with Trump.

"It’s going to have the absolute opposite effect on [Trump]. I think it’s actually going to raise his tolerance level," the source said of environmental groups targeting Pruitt. "The guy is loyal, and the guy isn’t going to fire somebody just because of a bad story."

Many of Pruitt’s allies have come to his aid in recent days. Sen. Jim Inhofe (R-Okla.) said he was "embarrassed" he doubted Pruitt and slammed media reports about some of the administrator’s mishaps. Others have outright denied Pruitt committed any wrongdoing. Cleta Mitchell, a friend of Pruitt who is running his legal defense fund, said she personally volunteered to help Pruitt’s wife, Marlyn, find a job and that no government resources were used.

"Last year, I voluntarily assisted Mrs. Pruitt in seeking professional opportunities that would steer clear of any ethics rules involving the EPA or Administrator Pruitt," she wrote yesterday in the National Review. "It was 100 percent above board and within government ethics rules and at no time did I speak with or hear from any EPA employee regarding their ‘helping’ with her job hunt."

For many in Trump’s corner, Pruitt is the ideal EPA administrator. He’s pulled back the federal agency’s reins on everything from enforcing current laws to rewriting ones they feel are overly burdensome. He’s been a conservative-movement darling.

Past GOP administrations might have appointed a center-right EPA chief — someone in the mold of Bill Ruckelshaus, Christine Todd Whitman or William Reilly, past Republican EPA administrators who have slammed Pruitt. The fact that those EPA administrators disdain Pruitt has allowed Trump to look past the bad press.

"Scott Pruitt is the star of the Trump administration. He has done exactly as he stated he would do and supported President Trump in every way," Bob Murray, Trump ally and CEO of coal company Murray Energy Corp., said in an interview. He added, "The accusations against Mr. Pruitt are really so contrived that, while his performance has held him in good standing, on the face these accusations are often baseless."

To many in the conservative movement who back Trump, Pruitt is in the mold of Gorsuch Burford — and by that, they mean through policies rather than scandals. To them, that’s a good thing.

"I worked for President Reagan, and we had a great EPA administrator at the beginning of our administration, and because she got raked over the coals, the next administrator was less aggressive about implementing the kinds of reforms President Reagan would have liked," said Becky Norton Dunlop, a Ronald Reagan distinguished fellow with the Heritage Foundation. "I think [Pruitt] will stay as long as the president is happy with the accomplishments."

Much of the president’s happiness with Pruitt has come from the unbounded zeal with which his EPA chief has pursued the conservative deregulatory playbook — a playbook that Heritage and industry iconoclasts like Murray and Continental Resources Inc. CEO Harold Hamm practically designed for the Trump campaign and presidential transition.

Pruitt may be inclined against drawing more attention. Many of his missteps came to light because environmental groups sought communications about policy decisions with which they disagreed. And yet, the only thing that may save Pruitt’s job is to crank the dial on actions that riled his critics in the first place.

"I think this exacerbates his desire to prove his mettle to the administration’s agenda of regulatory rollback," Eberhart said.