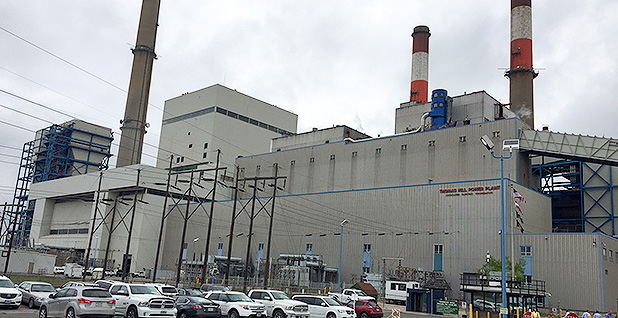 "The agency has been an agency that has tried to pick winners and losers … to say we’re going to put a thumb on the scale for a certain type of energy at the expense of others," Pruitt said on the third stop of his "Back to Basics" tour.

"It’s not the job of the EPA’s to say to the co-ops of Missouri, to say to investor-owned utilities across the country that the decisions they make when generating electricity is the federal government’s decision," he said.

Pruitt highlighted a pair of executive orders signed in recent weeks — the initial steps, he said, to rescinding and rolling back the Clean Power Plan and the Clean Water Rule. He didn’t mention the filing of a motion late Tuesday with the U.S. Court of Appeals for the District of Columbia Circuit asking for a pause in a lawsuit by opponents of the Mercury and Air Toxics Standards (Climatewire, April 20).

Environmental advocates decried Pruitt’s visit to the Thomas Hill plant, which they said emits smog-forming nitrogen oxides and sulfur dioxide at a rate higher than the average U.S. coal plant.

Pruitt’s decision to showcase the plant, they said, is another signal of the Trump administration’s agenda.

But there was nothing but applause for Pruitt at the Thomas Hill plant yesterday, where he was joined by Sen. Roy Blunt (R-Mo.) and other GOP officials and cooperative executives.

In his 12-minute speech, Pruitt continued on themes he hit on during his visit last week to the nation’s largest underground coal mine in Pennsylvania (Climatewire, April 14).

"For too long, for the last eight years, we’ve had an administration that told us, ‘You have to choose between jobs and growth and protecting the environment,’" he said. "And that is a false choice."

Barry Hart, CEO of the Association of Missouri Electric Cooperatives, the lobbying arm of Missouri’s rural cooperatives, suggested that rules like the Clean Power Plan threatened the viability of plants like Thomas Hill.

Hart said the plant, which pays an average wage of $35 an hour, is an irreplaceable economic asset for rural Missouri.

"If you do away with those 223 jobs, just think about what that would do to rural Missouri," he said.

For its part, Associated Electric Cooperative Inc., Thomas Hill’s owner, had not made any decision to shut any of the three units at the plant as a result of the Clean Power Plan, spokesman Mark Viguet confirmed yesterday.

In fact, changes at AECI, a Springfield, Mo.-based generation and transmission cooperative that supplies power to 51 rural cooperatives across Missouri, Iowa and Oklahoma, very much resembles the transformation underway at utilities across the country.

Like other electric generators, AECI has responded over the years more to market forces by diversifying its fleets.

The 1,153-megawatt Thomas Hill plant is an example. The plant has run less often than usual over the past year. But the reason isn’t Obama-era environmental regulations. It’s cheap natural gas.

AECI decided last year to run its natural gas plants at record levels to take advantage of cheap fuel prices, according to the cooperative’s annual report.

In February and March of 2016, the gas units cost $2.40 a megawatt-hour less than its coal units, saving the member-owned cooperative about $1.6 million.

In December 2015, AECI put three coal units, representing almost 1,400 MW, into reserve shutdown for the first time since the 1980s to take advantage of historically cheap gas. The result was a $1.3 million savings for consumers.

Blunt, one of Pruitt’s strongest backers in Congress, said affordability must be a focus no matter what fuel is used to generate electricity.

"I think coal has to realize that natural gas is a real competitor, but you don’t want to force a plant to make that transition if the ratepayers can’t afford it," Blunt told reporters. "The people who absorb that policy are the families that pay the bill."

The sentiment was echoed by Jim Matheson, CEO of the National Rural Electric Cooperative Association.

NRECA was among the first parties to file legal challenges to the Clean Power Plan. While its member cooperatives across the country are diverse in terms of how they generate electricity, the group wants to see a suite of environmental rules reviewed out of concern for the cost to members, Matheson, a former Democratic congressman from Utah, said in an interview.

"We think for rural America, affordable power is one of the building blocks if you’re going to have economic development," he said.

Like many cooperatives and utilities across the country, AECI has taken significant strides to diversify its fleet in response to consumer demands for cleaner energy.

Since 2007, AECI has contracted to buy 750 MW of wind energy from projects in Missouri, Kansas and Oklahoma. Wind accounted for 14 percent of the energy generated last year.

Unlike investor-owned counterparts in Missouri, AECI entered long-term contracts for wind energy without being required to do so under the state’s renewable energy standard, which only applies to investor-owned utilities.