Pruitt science plan may block use of major Harvard study 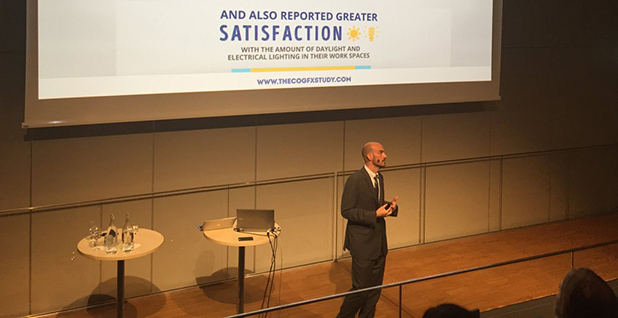 Harvard University researcher Joseph Allen speaks about the results of a green building study in 2016. @WorldGBC/Twitter

Harvard University is working on an international survey that researchers believe could revolutionize the world’s understanding of how buildings affect public health.

There’s just one problem: Because of a change to scientific standards proposed by Administrator Scott Pruitt, EPA regulators likely won’t be able to use the study’s findings to better protect Americans.

"This speaks to the central issue with that regulation," Harvard’s Joseph Allen, the principal investigator of the global buildings study said of EPA’s regulatory science transparency proposal.

"All of our work, of course, is peer reviewed in top academic journals and has gone through that process that we’ve all used for many decades now," said Allen, who is also co-director of Harvard’s new Center for Climate, Health and the Global Environment, or C-CHANGE. "But it has the same limitations as all of our research in this domain."

The three-year-long global buildings study — like almost all public health research — is based on sensitive personal data that Allen’s team has promised will remain confidential.

Harvard and SUNY Upstate Medical University, which is also working on the project, have begun collecting information on the health and cognitive function of a group of people that will eventually include thousands of workers in 100 buildings across the globe.

But EPA’s transparency proposal, which mirrors a plan from a former tobacco industry lawyer who served on the agency’s transition team, would make it very difficult for EPA staffers to take into account the global buildings study and other public health research when crafting major regulations.

That’s because "the proposed regulation provides that, for the science pivotal to its significant regulatory actions, EPA will ensure that the data and models underlying the science is publicly available in a manner sufficient for validation and analysis," the draft rule says.

Significant regulatory actions are ones that the regulators determine could have an annual effect on the economy of at least $100 million, could materially affect certain states or economic sectors, or raise legal or federal budgetary issues. New building ventilation standards, for instance, would likely be considered significant.

EPA says "nothing in the proposed rule compels the disclosure of any confidential or private information in a manner that violates applicable legal and ethical protections."

But Andrew Rosenberg, a former federal scientist who is now at the Union of Concerned Scientists advocacy group, believes it would be virtually impossible to anonymize all of the personal information Allen and his team are collecting. Even if the names of participants were redacted, he argued, their identities could be deduced based on the building they work in.

"There’s absolutely no reason that anyone needs to see the raw data to decide whether the science is credible and legitimate," said Rosenberg, who was deputy director of the NOAA Fisheries during the Clinton administration.

"I review many, many papers for top-tier journals every year," he said. "I don’t review the raw data. I look at the methodology and the summary statistics and the results and so on. That’s the general process that all reviewers follow."

The proposal also allows Pruitt to exempt certain studies from the transparency requirements on a case-by-case basis, which Rosenberg says would give a pass to research conducted by politically favored industry players.

Using data requirements to exclude important public health research from EPA consideration may very well be the point of Pruitt’s transparency proposal, according to Rosenberg, Allen and other critics in the scientific community (Climatewire, April 25).

"This administration long ago signaled its intent to dismantle important environmental protections at the expense of our collective health, and they are acting on that promise," the Harvard researcher said.

Christopher Horner, who helped shape EPA in the early days of the Trump administration, urged the tobacco industry in 1996 to push for similar "sound science" criteria in the federal rulemaking process.

At the time, Horner was a lawyer at the firm Bracewell & Patterson LLP, and his client, the R.J. Reynolds Tobacco Co., was worried about growing scientific evidence of the dangers posed by secondhand tobacco smoke. To prevent agencies from using health studies to support curbs on smoking, Horner suggested "addressing process as opposed to scientific substance."

Specifically, he wrote that one of the criteria for "sound science" should be "can the answer be reproduced from the record?"

The laborious requirement would help provide "a new mechanism to control EPA and other regulatory bodies," he wrote. The end goal is to avoid "to the extent possible specific scientific issues, contaminants, or industries."

The memo, first reported by The Intercept, was produced during litigation between state attorneys general and the tobacco industry and collected by the University of San Francisco.

Rosenberg sees a direct connection between Horner’s "secret science" plan for the tobacco industry and the science transparency proposal pushed by Pruitt, whose political career has been bankrolled by fossil fuel companies concerned about climate science.

"They use the same tactics" to prevent the adoption of cutting-edge public health research, he said. "All it does is delay. It has no function. It doesn’t improve the scientific evidence, it doesn’t make people healthier, it doesn’t do anything."

Horner, who is now a senior fellow at the libertarian Competitive Enterprise Institute think tank, defended his memo to E&E News as "a set of simple rules of good scientific conduct that judges can easily follow without attempting to step into the shoes of scientists." He added, "Codification of such transparency requirements would protect against regulatory excess across industry lines by promoting accountability, transparency, and checks and balances in rulemaking."

CEI has also come out strongly in favor of Pruitt’s science overhaul.

"If the government is going to make policy based on research, we need transparency so that the scientific community at large can validate it," senior fellow Angela Logomasini said in a statement. "And furthermore, researchers should want their work to be transparent—that makes their work more policy relevant and their research stronger and better. It should be rare when data has to be kept private, but today failure and even refusal to release data is all too common."

Yet the transparency proposal is already prompting confusion within EPA. For instance, the top career official responsible for safeguarding the nation’s drinking water supply last month couldn’t say how the rule would affect its efforts to protect the public from toxic nonstick chemicals (em>Greenwire, May 24).

EPA didn’t respond to requests for comment on the Harvard study and the science proposal. The agency is accepting public comments on the proposal through mid-August (Greenwire, May 24).

Regardless of what happens at EPA, Allen is hopeful that the results of his study can still help improve the lives of Americans, nearly all of whom either live or work in buildings.

"By working with good companies, on a market-based approach, using sound science, we can continue to advance both the planet and the economy," he said, pointing to a collaboration between C-CHANGE and Google to reduce the use of dangerous chemicals in home and office furnishings (Greenwire, May 31).

"So everyone wins in our vision of public health," Allen said.