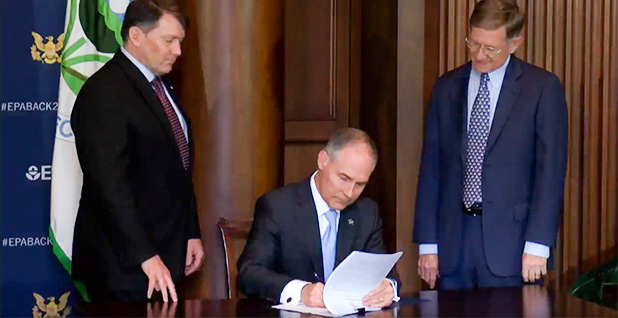 EPA Administrator Scott Pruitt on Tuesday signed a proposed rule to stamp out "secret science" at the agency. EPA

The White House Office of Management and Budget completed its review of EPA’s proposed "secret science" rule yesterday — one day after EPA Administrator Scott Pruitt signed it, according to the Reginfo.gov site.

The proposed rule, which Pruitt signed Tuesday, would require EPA to make the scientific data used to develop major regulations publicly available "for validation and analysis."

While Pruitt said the proposal is geared toward boosting public confidence in the resulting rules, critics have labeled it a ploy to exclude research that could justify tighter regulations on polluters.

The Reginfo.gov site is intended to chart the progress of regulatory reviews by OMB’s Office of Information and Regulatory Affairs. While OMB is sometimes slow to update the site, it was unclear why Pruitt would have signed a rule before the review was completed.

In a response provided after this story was initially published, EPA spokeswoman Liz Bowman suggested that fault lay with OMB. "Interagency review concluded before this proposal was signed," she said in a statement. "Any questions about the management of www.reginfo.gov should be directed to OMB." An OMB spokesman did not reply to a request for comment also made this morning.

"Is it just poor management, or is there something else going on?" Paul Billings, senior vice president for advocacy at the American Lung Association, asked in an interview this morning. He added that it represented an "extraordinary" departure from the normal course of business.

The reviews, required under a Clinton-era executive order, are intended to give other agencies and outside organizations and people the chance to weigh in on proposed regulatory actions. They are supposed to take no more than 90 days, although extensions are possible.

By any standard, OMB’s turnaround time in this instance was exceptionally brief for a controversial proposal, lasting less than a week after EPA forwarded the proposal last Thursday. The American Lung Association requested a meeting with OMB staff Friday but never heard back, Billings said. At the Union of Concerned Scientists, which has also been critical of the proposal, Senior Washington Representative Yogin Kothari termed OMB’s handling of the proposal a check-the-box "sham."

Tuesday’s signing ceremony, which took place before an invitation-only audience but was streamed live on EPA’s website, represented a rare bright spot of late for Pruitt, who has been besieged by allegations of improper spending and ethical wrongdoing. Present for the event were House Science, Space and Technology Chairman Lamar Smith (R-Texas) and Sen. Mike Rounds (R-S.D.), both of whom have introduced legislation with a purpose similar to that of the proposed regulation (E&E News PM, April 24). The two showered praise on Pruitt.

The proposed rule "is putting a stop to hidden agendas," Smith said. "We couldn’t have a better head of the EPA."