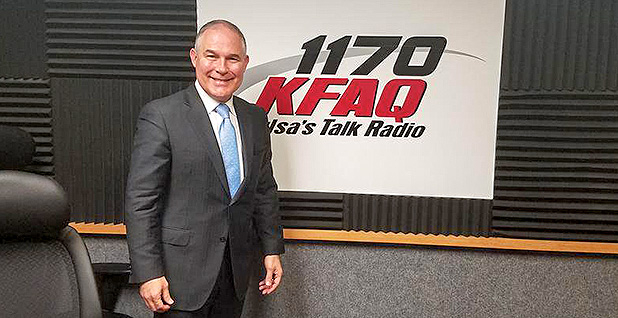 Scott Pruitt, in an interview taped a year before he was asked to lead U.S. EPA, blasted then-presidential candidate Donald Trump as a dangerous threat to the Constitution.

"You’re probably not a very big Trump supporter," asked radio host Pat Campbell during a Feb. 4, 2016, interview for "The Pat Campbell Show" on Talk Radio 1170 from his studio in Tulsa, Okla.

"No," replied Pruitt, who at the time was attorney general of Oklahoma. "I believe that Donald Trump in the White House would be more abusive to the Constitution than Barack Obama, and that’s saying a lot."

Pruitt went on to warn that Trump, should he be elected president, would use executive orders as a "blunt instrument" with respect to the Constitution while Obama "at least tries to nuance his unlawfulness."

Campbell went on to applaud Pruitt’s credibility with the audience and said "everything that we loathe and detest about Barack Obama and the abuses of power, Donald Trump is the same thing except he’s our bully."

Pruitt’s blistering criticism casts a negative light on one of Trump’s most trusted lieutenants and a rising star in the administration.

Months after conducting the interview in Oklahoma, Pruitt, a former adviser to Jeb Bush’s presidential campaign, emerged as Trump’s pick to lead EPA.

The former attorney general has gone on to implement the president’s signature regulatory rollback campaign and to undo the Obama administration’s landmark climate change actions.

But Pruitt’s interview, public since it aired on the radio station’s website, received attention this morning ahead of an already contentious Senate hearing (see related story).

Pruitt attempted to distance himself from the interview at the Senate Environment and Public Works Committee meeting this morning, telling Democratic Sen. Sheldon Whitehouse of Rhode Island he didn’t recall saying Trump would be "worse for the Constitution than Obama."

In a statement, Pruitt said: "After meeting him, and now having the honor of working for him, it is abundantly clear that President Trump is the most consequential leader of our time.

"No one has done more to advance the rule of law than President Trump. The President has liberated our country from the political class and given America back to the people."

Pruitt, whom he called a "longtime friend of the program and radio station," also took part in separate interviews and returned on July 27, 2017, as part of EPA’s "state action tour" to discuss the repeal of the Obama administration’s Clean Water Rule (Greenwire, Jan. 25).

When asked how much traffic the podcast was pulling in, Travis said it was marching upward. "There’s been a dramatic spike in the last days," he said. "It’s done decently overall."