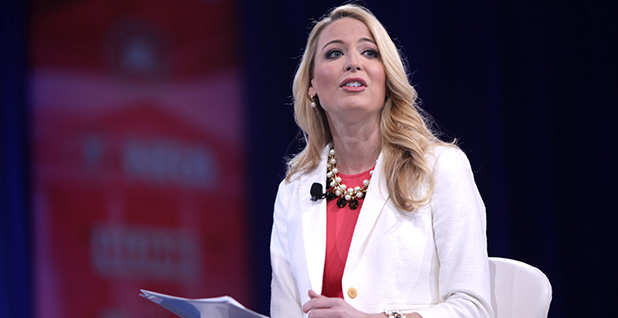 Agency officials have informed staff in the past week that the environmental justice office and the National Environmental Policy Act (NEPA) office will be moved from their current home in the Office of Enforcement and Compliance Assurance to the Office of Policy, EPA staff told E&E News. Because the policy office is housed organizationally within Pruitt’s office, some view it as an effort by political employees to exert more influence over their work.

The policy office, located within the administrator’s office, is headed by Samantha Dravis, a longtime conservative political operative hired by Pruitt earlier this year. The position doesn’t require Senate confirmation.

Dravis previously worked with Pruitt at the Republican Attorneys General Association, where she was policy director and general counsel. She was also president of the Rule of Law Defense Fund and legal counsel at Freedom Partners Chamber of Commerce, which is linked to the Koch brothers’ network of conservative-leaning donors. She worked on Mitt Romney’s 2012 presidential campaign and was associate director for political affairs in the George W. Bush White House.

"I view this move as indicating that Administrator Pruitt values the office of environmental justice and values that function and it’s not going to be eliminated; it’s going to continue," she said. She added that the NEPA review activities will be better positioned in the policy office, which is charged with coordinating with other federal agencies.

Staff were informed during meetings and on conference calls in recent days about the administration’s plans, according to EPA employees.

The agency’s environmental justice office will be moved in its entirety from the enforcement office to the policy office, said one employee informed about the plans. The Office of Federal Activities — which now includes the NEPA compliance division and the international compliance assurance division — will be split, that person said.

One EPA employee said there are concerns about whether the NEPA office will continue to achieve its mission within the policy shop. While the move might seem innocuous, it is not, that person added. EPA staff have been instructed to limit their comments on NEPA reviews, and employees are concerned that members of Congress will attempt to eliminate EPA’s authority to review other agencies’ NEPA analyses.

Giles said EPA’s reviews don’t add time to the process and are valuable to other agencies. "It’s much faster for agencies to find and fix the problems in advance rather than waiting to get sued," she said.

Myron Ebell, director of the Center for Energy and Environment at the Competitive Enterprise Institute, led Trump’s EPA transition team. Last month, he sent a list to the White House of the EPA programs he’d like to see axed, which included the enforcement office (Climatewire, Aug. 16).

Under Ebell’s plan, the functions of the enforcement shop could be returned to program offices. Clean Air Act enforcement, for example, would be handled by the air office.