Pruitt to face heat on the Hill this week 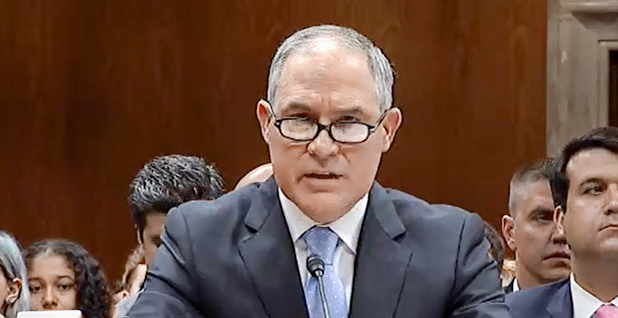 EPA Administrator Scott Pruitt’s fate might hinge on how he performs at double-header hearings on Capitol Hill this week.

On Thursday, the embattled EPA chief will appear at two different hearings ostensibly to discuss President Trump’s fiscal 2019 budget proposal for the agency.

Allegations of exorbitant spending and misuse of his Cabinet-level power have engulfed Pruitt ever since news broke last month that he signed a condo lease linked to a lobbyist whose firm’s clients have business before EPA. It has also now emerged that the lobbyist did have contact with the agency, even meeting with Pruitt, despite his earlier statements that he never lobbied EPA over the past year (see related story).

The hearings will be lawmakers’ first opportunity to question Pruitt in public since many of the charges that have grabbed national headlines broke, sparking a push to remove him from EPA.

At least a dozen Democrats who sit on one of the two subcommittees have already signed onto a resolution calling for Pruitt to resign. Although only a few Republicans have said Pruitt should leave EPA, several are expected to have tough questions for the administrator at the hearings as well.

Asked if this week’s hearing was supposed to be on EPA’s budget, Rep. Greg Walden (R-Ore.), chairman of the House Energy and Commerce Committee, joked, "Oh, but it’s not limited to a budget discussion — is it?"

Walden told E&E News that his committee staff has "been in contact with the EPA at various levels and ways to inquire [for] information about the allegations."

"He’ll have a perfect opportunity to answer member’s questions. He serves at the pleasure of the president and he has done a lot of good work as the EPA administrator and tackled some big issues from cleaning up the Portland Harbor, putting that on a faster track, to others," Walden said.

"I think he has made a lot of good improvements and changes on policy, but he is going to have to answer these other questions," he added.

Rep. John Shimkus (R-Ill.), chairman of the Environment Subcommittee, said last week that Pruitt will be asked about his "unforced errors" when running EPA.

"He’s coming before the subcommittee to answer questions," Shimkus said. "There’ll be policy questions, but I bet there’ll be a lot of questions raised about what a lot of us are calling unforced errors."

Rep. Bill Flores (R-Texas), who sits on the Environment Subcommittee, said, "I haven’t seen at the point that it has impacted his ability to do his job. I think we need to drill into the allegations and see what really has happened and hasn’t. If the allegations are true, they are troubling, and we should expect higher of any person in public office."

Rep. Ken Calvert (R-Calif.), chairman of the Appropriations subcommittee that is hosting Pruitt this week, also said he didn’t see a reason for Pruitt to leave EPA.

"I don’t believe there is any reason for him to leave. We have hearings going on, we’ll see what the outcome of that is. At this point, there’s no reason I see for him to leave," Calvert said.

"Right now, Scott Pruitt is doing a great job at EPA, and we are excited to have him there," Short said on NBC’s "Meet the Press."

Sen. Tom Carper (D-Del.), ranking member on the Environment and Public Works Committee, expected Republicans will speak out against Pruitt like their counterparts have across the aisle.

"In private conversations that I’ve had with my GOP colleagues there is not just disappointment with Mr. Pruitt on any number of levels but disdain," Carper said. "I think eventually they will. I think they’ll find their voices. Maybe sooner rather than later."

More Republicans may become vocal in their opposition to Pruitt. One House GOP member said yesterday that Pruitt should exit EPA.

"Yes EPA Administrator Scott Pruitt should resign. Wrong fit from start for agency dedicated to protecting our environment," said Rep. Frank LoBiondo (R-N.J.) in a tweet. LoBiondo is retiring from Congress after this year’s midterm elections.

Dems are taking a stand

The hearings come as Democrats continue to call for Pruitt to resign or be fired on a daily basis.

Sen. Tom Udall (D-N.M.), the ranking member on the Appropriations subcommittee that funds EPA, said last week that a nonbinding resolution introduced in both chambers expressing "no confidence" in Pruitt has already gained a record number of co-sponsors from previous such measures.

"This shows the passion that people have for believing it’s time for him to go," Udall said.

While Democrats are looking for opportunities to force a vote on the measure in the Senate, Udall conceded "it’s going to be hard," given GOP control of the chamber.

"The important point is taking a stand," he said. "We think his behavior is outrageous and he’s got to go."

Next stop: The Senate

After this week’s hearings, Pruitt will likely be back on Capitol Hill to meet with senators.

Sen. Lisa Murkowski, chairwoman of the Appropriations subcommittee that funds EPA, said last week she is in the process of figuring out when Interior Secretary Ryan Zinke and Pruitt will appear before her panel to testify on the administration’s fiscal 2019 budget proposal.

"We’ve got to move really quickly," said the Alaska Republican.

Murkowski did not offer specific dates but indicated that things could ramp up in late spring.

"We’re expected to be finishing things up in another month or so," she said. "We’re not going to have anything next week, but after we get back, we’re going to be busy."

The House and Senate are scheduled to be out for a district and state work period from April 30 to May 4.

Asked to comment about the ethics controversies swirling around Pruitt, Murkowski said the Trump administration has "got a decision to make with the administrator in terms of whether or not he has the support of the president."

She added that "all of these issues distract, detract from [Pruitt’s] ability to do the job and we’ve got a lot that we’re expecting" from EPA.

Murkowski was talking to reporters in a Senate subway car last Thursday during a ride between the Capitol and her office in the Hart Senate Office Building.

Carper happened to be in the same car and agreed with Murkowski’s comments about Pruitt and EPA.

"I’m Tom Carper, and I approve this message," he quipped. "That’s all I’m saying."

Schedule: The House Energy and Commerce subcommittee hearing is Thursday, April 26, at 10 a.m. in 2123 Rayburn.

Schedule: The Appropriations subcommittee hearing is Thursday, April 26, at 2 p.m. in 2007 Rayburn.