Pruitt to preach ‘cooperation’ for agency 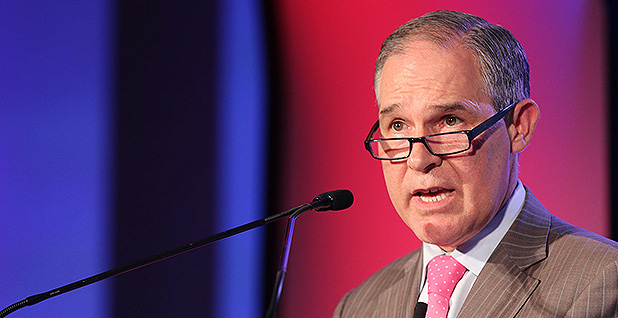 Oklahoma Attorney General Scott Pruitt (R) speaks at the state Farm Bureau convention in 2014. If confirmed as U.S. EPA administrator, Pruitt would likely be more friendly to the agricultural sector's demands. Photo by the Oklahoma Farm Bureau, courtesy of Flickr.

Scott Pruitt, President-elect Donald Trump’s pick for U.S. EPA administrator, will outline his plans for a friendlier agency at his confirmation hearing today.

According to his prepared opening statement for the Senate Environment and Public Works Committee hearing this morning, the Oklahoma attorney general will tout his record for cooperation and what he sees as his role in environmental law.

"Such cooperation is essential because clean air and water and a healthy environment are essential to the American way of life and key to our economic success and competitiveness," he continues.

In his statement, Pruitt also touts his work as Oklahoma attorney general regarding a water pollution case involving poultry producers and the Illinois River. He says he came to an agreement with neighboring Arkansas to clean up the river, though environmentalists have said the deal shows his penchant for lax enforcement (Climatewire, Jan. 3).

Pruitt indicates that collaboration is now lacking at EPA, leading the agency to act outside the authority given to it by Congress.

"As Attorney General of Oklahoma, I saw examples where the Agency became dissatisfied with the tools Congress has given it to address certain issues, and bootstrapped its own powers and tools through rulemaking," Pruitt says, adding it resulted in "protracted litigation" with courts blocking rules after years of delays.

"This is not the right approach," Pruitt says.

As Oklahoma attorney general, Pruitt was a party to or behind much of that litigation against EPA, stalling some of the agency’s major rules, such as the Clean Power Plan and the Waters of the U.S. rule. In contrast, as EPA administrator, he pledged to have "a cooperative and collaborative relationship" with lawmakers so the agency would stick to the policies that Congress crafts.

Pruitt also touts "cooperative federalism" whereby states must be "partners" of the federal government to achieve clean air and water. He said he would use his relations with state officials to return EPA to its "proper role," rather than being "a heavy hand."

He also said under his charge, EPA would make its decisions in the open and consider "the full range of views," including any regulation’s "economic consequences."

"Environmental regulations should not occur in an economic vacuum. We can simultaneously pursue the mutual goals of environmental protection and economic growth," Pruitt says.

Pruitt says as Oklahoma attorney general, he met people across the state that feared EPA, even though they too wanted to protect the environment. He says that shouldn’t be the case and that as EPA chief, he would make sure the agency acts "lawfully, sensibly, and with those hardworking Americans ever in mind."

Dems aim to put Pruitt through the wringer

Pruitt is facing one of the tougher confirmation battles among Trump’s nominees. Considering Pruitt’s criticism of EPA as well as his questioning of climate change science, environmental groups have gone all out in opposition to the nominee.

Democrats took turns on the Senate floor last night blasting Pruitt as Trump’s EPA pick, saying his confirmation would be bad for the environment. Sen. Tom Carper (D-Del.), the EPW Committee’s ranking member, also said yesterday he was moving ahead with plans for Democrats to hold a hearing with outside witnesses to testify on Pruitt’s record.

Carper said the GOP has declined to have outside witnesses at Pruitt’s hearing, arguing the panel does not typically have such witnesses at confirmation hearings. Carper’s hearing — which he has dubbed a "sunshine hearing" — would not be an official committee event.

Carper also called it "disappointing" that Pruitt had not yet responded to more than 50 policy questions raised by Democrats last month.

"We are told we’ll get the answers tomorrow [during the hearing] — to me that seems pretty slow," Carper said. He said he has received Pruitt’s FBI background check — a "very skinny report."

Carper said Democrats would not seek a delay over a lack of answers, saying, "I think we should let the hearing go forward and see what we can learn, but frankly to date we have not learned as much as we could."

Democrats also continued to push that Pruitt’s ties to industry and various political groups would be conflicts of interest for him if he was EPA chief. They released letters last night from officials at the Office of Government Ethics and EPA that ethics reporting requirements were lacking in disclosing those conflicts.

Committee Chairman John Barrasso (R-Wyo.) said he expects the hearing to address many of the questions and downplayed Democratic concerns about a lack of a response.

"We are going to have a lengthy hearing [today] where people will have plenty of time to ask questions and, as with all committees, members will have a chance to submit questions afterwards and they’ll all be answered," Barrasso said.

The chairman said his focus would be making sure no topics are missed at the hearing. "I’ll make sure things come out," he said.

Pruitt may have to face a few surprises at tomorrow’s hearing. Sen. Sheldon Whitehouse (D-R.I.), a committee member who frequently takes to the Senate floor to call for action on climate change, was coy when asked about what questions he might have for Pruitt.

"We’re working on it. I am not going to reveal my secrets," he said.