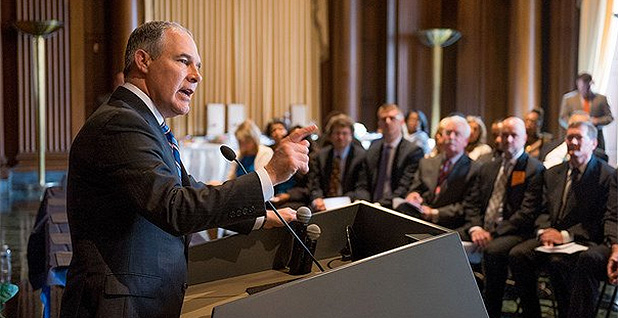 EPA chief Scott Pruitt is expected to announce his plan today to overhaul the agency's use of science. @EPA/Twitter

The EPA administrator is slated to release an order requiring that all underlying data used in scientific studies affecting regulations be made public. The move fulfills a long-standing wish of some conservatives who argue that EPA has been relying on "secret science" when crafting rules.

Pruitt’s announcement is scheduled for 2 p.m. at agency headquarters, according to someone familiar with the event. Conservative supporters of the initiative are expected to be among those attending.

The EPA chief has previously hinted at his plans to conservatives and in media interviews, but the agency hasn’t released specifics. In a recent closed-door meeting with conservatives gathered at the Heritage Foundation, Pruitt told attendees he would release his plans by April 24, according to someone who attended the meeting.

EPA’s press office did not respond to a request for comment.

The "secret science" initiative has long been championed by Rep. Lamar Smith (R-Texas), chairman of the House Science, Space and Technology Committee, whose attempts to overhaul EPA science through legislation have failed.

Smith’s staff has been coordinating with Pruitt on the effort, according to emails released last week under a Freedom of Information Act request (Climatewire, April 20).

Those emails also show that EPA staff wanted to have the program rolled out by the end of February and that at least one political staffer internally warned about problems the new policy could pose for industry.

Holding the rollout now might offer Pruitt a welcome distraction from headlines surrounding alleged ethical lapses. Pruitt heads to Capitol Hill on Thursday to testify in back-to-back House hearings. Bloomberg reported yesterday that White House officials are urging Republicans and conservatives to scale back their defense of the embattled EPA boss.

EPA last week sent a proposed rule to the White House Office of Management and Budget with the announced purpose of "strengthening transparency and validity in regulatory science" (Greenwire, April 20).

The expected overhaul has alarmed critics, who say it would threaten public health and environmental protections by preventing EPA from using all available data. Many scientific studies rely on data that can’t be made public for reasons like patient privacy concerns or industry confidentiality.

Smith and others who have pushed for science reforms at EPA argue that data influencing rules should be more transparent.

Steve Milloy, who served on Trump’s EPA transition team, has pushed for the agency to stop issuing regulations unless the underlying scientific data are made public.

He declined to discuss today’s EPA event, but said, "If I was going to be there, I would be very excited." He said of the effort, "I look at it as one of my proudest achievements. The reason this is anywhere is because of Steve Milloy."