Pruitt tries to repair his image by fighting Trump’s budget 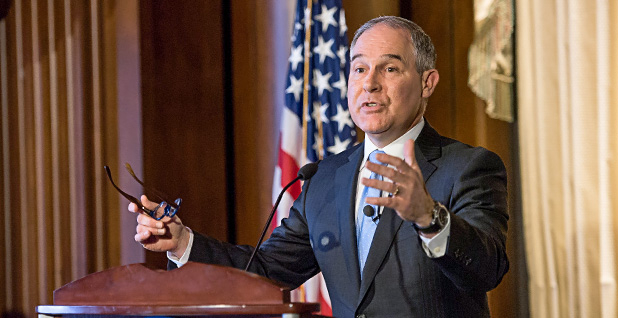 Speaking first to reporters after the president’s address to Congress on Wednesday and then before the U.S. Conference of Mayors yesterday, Pruitt reiterated that he wants to maintain funding to clean up brownfields and Superfund sites, meet unfulfilled air quality standards and keep paying for local water infrastructure.

Pruitt asked mayors to bring him "success stories" to take to the White House Office of Management and Budget, which is drafting the president’s proposed spending blueprint (Greenwire, March 2).

An initial version of the budget proposal suggested reducing EPA’s overall budget by one-fourth, cutting state air grants by 30 percent, eliminating 3,000 employees and zeroing out 38 programs, according to a summary being circulated by sources familiar with the plan.

An EPA official who asked reporters not to identify him by name said yesterday that Pruitt made it clear that some of his budget priorities differ from the White House’s draft. The official said he wouldn’t characterize Pruitt’s concerns as "pushback." He noted that there are some programs both Pruitt and members of Congress want to keep around.

"There’s going to be back-and-forth," he said.

While Pruitt is doing damage control and touting his support of some of the money that goes to states, he hasn’t addressed funding for other issues reportedly on the chopping block. These range from climate change and environmental justice to the largely successful Diesel Emissions Reduction Act and Energy Star programs.

John O’Grady, an EPA union leader, said Pruitt’s support for some programs is doing "nothing to allay" the fears of agency employees.

"EPA is full of very well educated and dedicated attorneys, biologists, chemists, ecologists, engineers, geologists, toxicologists, and other highly skilled professionals who are able to ‘read between the lines,’" O’Grady said in an email. "Mr. Pruitt is here at US EPA to deconstruct the US EPA."

Myron Ebell, who works at the Competitive Enterprise Institute and advised Trump’s EPA transition, said the overall budget reductions would be "applying market discipline to a bloated bureaucracy."

The grants are "generally money going to hire people to enforce the law, to write rules, to inspect facilities, to respond to citizens’ complaints, to help industry," said Bill Becker, head of the National Association of Clean Air Agencies.

Becker said it’s laudable for Pruitt to want to keep in place the state revolving funds for water infrastructure, "but to cut state air grants by 30 percent at a time when they’re underfunded already, and talking about delegating more responsibility to our [state] agencies, seems extremely unfair and harmful to the environment."

Alexandra Dunn, executive director and general counsel at ECOS, said EPA received the letter and is working hard on the budget issue. ECOS is proceeding to set up meetings with OMB’s Office of Information and Regulatory Affairs, she said.

Dunn said she’s been told the White House will finish writing its budget by March 16, giving states and Pruitt two weeks to try to change minds.

She noted that in early communications with EPA’s beachhead team, she got the sense that the agency understood that in order to give more authority to the states, it would have to continue to send them money.

Beyond grants to states, EPA could see huge cuts to science, former EPA Administrator Gina McCarthy said on MSNBC on Wednesday. She said the agency could lose 42 percent of scientists with funding reductions to EPA’s Office of Research and Development.