Pruitt: Trump asked, ‘Should we shut down the agency?’ 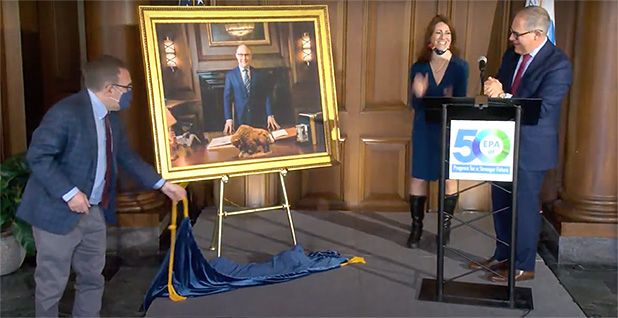 Former EPA administrator Scott Pruitt reacting at his portrait unveiling with then-Administrator Andrew Wheeler and former agency chief of staff Mandy Gunasekara by his side. EPA/YouTube

Former EPA Administrator Scott Pruitt delved into his legacy at his official portrait unveiling last month and recalled discouraging Donald Trump, then the president-elect, from shutting down the agency.

He remembered meeting with Trump as the incoming administration was being put together, including who would lead EPA, a position Pruitt was later nominated for.

"As I’ve looked at the mission of the agency, I recall very distinctly when I went to Trump Tower," Pruitt said. "When I met with the president-elect at the time, he asked me a question. He said, ‘Scott, should we shut down the agency?’"

Pruitt said closing the agency has been discussed at times, primarily because EPA was created by executive order. On the campaign trail in 2016, Trump talked about reducing the agency, leaving "a little bit."

But EPA’s 14th administrator said the agency should remain.

"I said, ‘No, Mr. President, the agency has a very, very important mission in this country with respect to the environment,’" Pruitt said, pointing to issues like air quality across state lines and the Superfund toxic waste site program.

"I think many believe, when we took over in the first quarter of 2017, that we’re going to put a vacancy sign on the front door, and the exact opposite happened," Pruitt said. "We came into this agency, in my view, and said we’re going to do what the statute requires, we’re going to take our statutory responsibilities seriously."

Pruitt’s remarks are detailed in a video recording of the unveiling ceremony for his portrait held Jan. 15 in the Green Room at EPA headquarters. E&E News obtained the video under the Freedom of Information Act.

His portrait is pictured in the video. Pruitt is seen wearing glasses and a suit and tie, standing above his desk with a bison bust before him.

Pruitt’s portrait, a framed photo on canvas, is hanging in the hallway with the other former administrators’ portraits at EPA headquarters, agency spokeswoman Lindsay Hamilton confirmed.

Transaction records for Pruitt’s portrait obtained by E&E News show it cost more than $4,000 and used a Washington Post photograph.

Pruitt resigned from EPA in July 2018 after his time in office was marked with ethics troubles. Excessive spending on travel and security, having EPA aides perform his personal errands, and renting a Capitol Hill condo tied to a lobbyist with business before the agency all culminated in his departure.

Also, as Trump’s first EPA administrator, Pruitt began a series of rollbacks of environmental protections on air, climate and water. Some have since been tossed in court, like the Affordable Clean Energy rule, which replaced the Obama-era Clean Power Plan designed to curb power plants’ carbon emissions.

In his remarks at the unveiling, Pruitt responded to attacks on him and EPA during his time there.

Critics disagree that EPA under the Trump administration was civil.

Hundreds of career employees left EPA, many of them feeling they and the agency were under attack. Members of EPA’s Science Advisory Board were forced to leave because they accepted agency grants. Pruitt repeatedly criticized the prior administration’s environmental record, saying President Obama was no "environmental savior."

EPA also issued press releases targeting news organizations and journalists by name. A reporter was shoved out of agency headquarters by a security guard, and another reporter was called "a piece of trash" by an EPA spokesman.

Pruitt didn’t respond to messages from E&E News for this story.

In his remarks at the unveiling, Pruitt acknowledged attendance was sparse.

The vast majority of EPA staff are teleworking because of the COVID-19 pandemic. Security was also tight for EPA headquarters after the Jan. 6 assault on the Capitol. Several former Trump EPA appointees had told E&E News they wouldn’t attend the ceremony.

Earlier at the event, Mandy Gunasekara, then EPA chief of staff, said many "notes of regret" were sent from people who wanted to come but could not.

"I remember the first day on the job, I stood at the front of this room and addressed many more than what are in this room today. It was packed, obviously, because we didn’t have what’s going on today," Pruitt said.

Pruitt discussed taking action on the Superfund program, like making progress on the West Lake Landfill site in St. Louis, as well as moving on chemicals, the renewable fuel standard and air quality attainments. He emphasized results over rhetoric, noting, "This administration is the only Republican administration to adopt a rule regulating the emission of carbon from power generation."

"Now think about all the rhetoric that’s in the marketplace about what this administration failed to do with respect to the environment. When you look at results across the board, we made progress in every area and even issued rules that I think surprised those of our opponents, though they don’t recognize it," Pruitt said.

Pruitt also thanked his former staff at EPA, some of whom attended the ceremony.

"I look at each of you that went through that with me, thank you. You’re a friend, you’re a colleague, you’re an encourager to me," Pruitt said. "And please know, I’ll never forget you. It was a blessed journey. We made history together. And so I say thank you to you."

Wheeler remembered that when Pruitt interviewed him for the deputy EPA administrator position, they both were wearing the same tie and that interview went longer than scheduled, possibly making Pruitt late for a Capitol Hill meeting.

"Hopefully, it was a Democrat," Wheeler joked. Wheeler added he walked away from that meeting thinking, "I want to come work with this man."

Wheeler said Pruitt lacked Senate-confirmed political appointees for months, "a real travesty for this agency and for the nation," and said he gave three examples of Pruitt’s legacy at EPA on Superfund, ozone and the PFAS Action Plan in an exit interview with two Washington Post reporters. Those examples were not mentioned later in a tweet by one of those reporters, which Wheeler commented on from his personal Twitter account.

"That’s the way both of us have been treated in the press, which has been unfairly. We’ve gotten a lot done, and you have every reason to be proud of your legacy. I’m proud to have served here as your deputy, even though we did only overlap by eight weeks," Wheeler said.

Wheeler added, "I’m proud of the leadership and the things that you set in motion to make sure that we accomplished as a team. I’ll always be grateful to you for selecting me as your deputy. Thank you, Scott."

Gunasekara also spoke at the ceremony. She remembered meeting Pruitt for the first time when he testified before the Senate Environment and Public Works Committee when he was Oklahoma attorney general and she was a committee aide. She discussed Pruitt’s respect for state rights and her first days at EPA working on Pruitt’s "Back to Basics" agenda.

"Now, Scott Pruitt has been described as many things, somewhat unfairly in certain instances," Gunasekara said. "But in my book, and for a lot of the folks who are in this room, and the people who wanted to be here today, they would describe you as a patriot, a staunch conservative, a defender and implementer of the law, a former boss, a mentor, and a friend."