Pruitt wanted coffee with greens. They said no 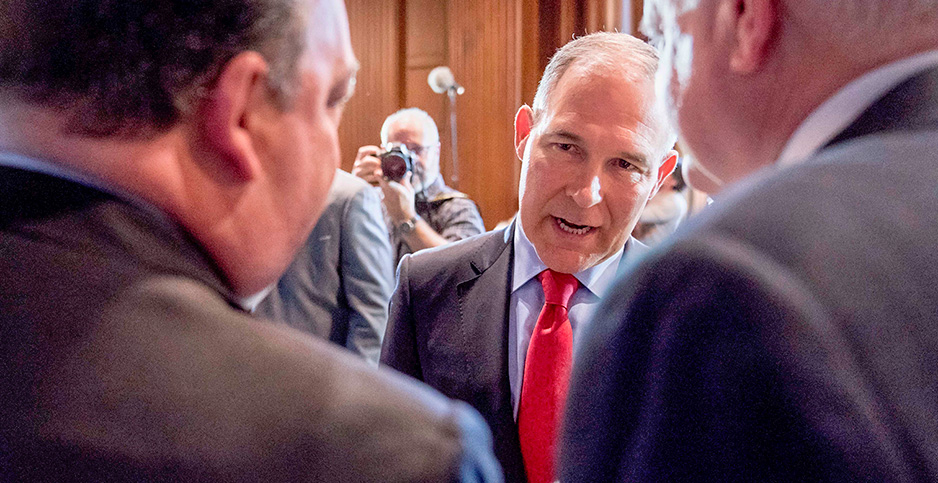 Scott Pruitt tried to meet with environmentalists last year, but they weren’t interested.

The EPA administrator’s chief of staff, Ryan Jackson, reached out to two employees at the Environmental Defense Fund last spring to gauge their interest in getting together.

"Administrator Pruitt asked me to reach out to you and check on your availability to meet for coffee to establish a relationship between EDF and him," Jackson wrote in an email to EDF President Fred Krupp and staffers Richard Denison and Joanna Slaney.

Pruitt was "interested in meeting to try to build a relationship and identify common ground and items on which we can work together," Jackson said. The emails were recently released to the Sierra Club under a Freedom of Information Act request.

But EDF decided not to engage with Pruitt, who was the first EPA administrator the group had opposed in its 50-year history.

"We talked about it and decided not to engage because it wasn’t transparent," EDF’s vice president of political affairs, Jeremy Symons, said yesterday in an interview. "We didn’t feel it was appropriate that they were only reaching out to us."

The EPA administrator has been widely criticized from the left for a schedule that’s heavy on meetings with industry groups and conservatives, with scant official interaction with environmental and public health groups. The latest emails offer further evidence that Pruitt and his staff communicate far more frequently with industry than they do with environmentalists. They also reveal several instances where EPA did reach out to Pruitt’s critics.

Jackson said in an email yesterday that he was disappointed that EDF had declined his overture for establishing a relationship with Pruitt. But Jackson said he values his relationships with EDF’s Denison and Slaney.

"I know they don’t agree with me all the time, but just because we don’t agree today doesn’t mean we can’t work together tomorrow," Jackson said.

In March of this year, Jackson reached out to Denison and Slaney after E&E News reported that environmentalists — including an EDF scientist — had turned down EPA’s invitation to join its Science Advisory Committee on Chemicals, raising questions about the panel’s balance (Greenwire, March 30).

"I wish you would consider staying," Jackson wrote.

Another environmentalist, John Walke of the Natural Resources Defense Council, attempted to meet with Pruitt and his top officials last year.

Pruitt’s policy chief, Samantha Dravis, had reached out to Walke after he was quoted in an E&E News story criticizing Pruitt for meeting overwhelmingly with regulated industries. Dravis wrote to Walke last November to ask whether he and his colleagues would like to meet with some of EPA’s policy team at the agency’s headquarters.

Dravis canceled several scheduled meetings with Walke, he said yesterday in an interview, so Walke and other NRDC officials requested a meeting with Pruitt. "We decided we thought there was value in meeting," Walke said.

It was around that time that NRDC learned EDF had declined to meet with Pruitt earlier. The meeting with Pruitt was never scheduled, due to the holidays, Walke said. By the time 2018 rolled around, he said, "Pruitt’s scandals were snowballing, and their policy decisions were so one-sided and antithetical to environmental and health protections, we had concluded there was no real value in meeting with him."

But he and a colleague did meet with EPA policy officials and Dravis earlier this year to discuss the policy shop’s Smart Sectors Program. The "conversation was very cordial," Walke said.

An EPA spokesman said Pruitt has met with several environmental groups during his time at the agency.

"It’s a false notion that there have to be sides to protecting our environment," said the spokesman.

"That’s why under Administrator Pruitt’s leadership, we’ve met with everyone from the Mom’s Clean Air Force to the Heartland Institute to advance environmental stewardship," he said.

Ricketts replied, "I bet I can upgrade their seats. Did Scott purchase the tickets himself." Ricketts is now finance chairman of the Republican National Committee.

Jackson wrote back, "Oh yes, he did but that’s a necessary thing. And something he’d just do anyway. Just wanted to let you know he’d be there and I know he’d love to see you if you have the opportunity."

According to Chicago Sun-Times columnist Michael Sneed, Pruitt made plans to see the Chicago Cubs play the Milwaukee Brewers that week.

‘Where the warts are’

Pruitt hasn’t been popular among all of his predecessors, but he found an early ally in former George W. Bush-era EPA boss Stephen Johnson.

On May 3, 2017, a few months after Pruitt’s confirmation, Johnson called the agency, according to the emails.

"He would like to schedule a call to talk to Administrator Pruitt," wrote Michelle Hale, an executive assistant in Pruitt’s office. "Mr. Johnson wanted to point out that he has not been critical of Administrator Pruitt and supports what he is doing.

"He mentioned that he knows ‘where the warts are in the agency’ and hopes to be of help," Hale wrote to Jackson.

Jackson was eager to introduce them. "I would love that. Please place me in the meeting," he wrote back. "Steve is a great guy and worked in the EPA his whole career before being nominated for Administrator."

Pruitt’s public calendar shows that he had a call with Johnson later that month, on May 22. Pruitt’s calendar also shows that he met with President Obama’s former EPA deputy administrator, Bob Perciasepe, on May 25 at EPA headquarters.

"Pruitt has spoken with a number of previous EPA leaders including Administrator Johnson," Jackson said today in an email. He said he wasn’t familiar with the conversation beyond that.

‘I have a PhD in cluster’

Also included in the newly released emails are more communications between Jackson and Steven Hart, a lobbyist whose wife rented their Capitol Hill condo to Pruitt for part of last year at $50 per night. That rental arrangement has attracted scrutiny, including from the EPA inspector general.

"I unfortunately represent the Puerto Rico Financial Control Board," Hart said in an email last October to Jackson.

"I do not need a meeting but might be good optics for you to be concerned about the water infrastructure. The electric grid is our first concerns but there are going to be huge health issues related to the water treatment facility."

Hart described the island’s "health crisis as the largest in the Americas since Columbus brought European disease to the New World." He offered to bring officials with the board who were in Washington that week to meet with Jackson.

Hart would later note another meeting involving the Treasury Department and Office of Management and Budget Director Mick Mulvaney, remarking that it’s "a cluster."

"I have a PhD in cluster," Jackson replied.

In a statement, Hart said he has never had favored status with Trump’s EPA.

"As I have said repeatedly, I never received any special treatment from Administrator Pruitt or had any undue influence over the Environmental Protection Agency," Hart said.

"Ryan Jackson is an old friend whom I have know for many years prior to his service with the EPA," he said. "We have discussed numerous issues and topics during his tenure as chief of staff, but he has never performed a special favor on my behalf."

In another email, first reported on by The New York Times yesterday, Hart pitched an EPA job applicant named Jimmy Guiliano to Jackson.

"I seldom talk to Scott but Vicki [Hart’s wife] does. She has talked to Scott about this kid who is important to us. He told Vicki to talk to you about how to handle this," Hart said in the email, sent in April 2017.

"I am not sure personally that this is a good idea for Jimmy unless he is working near you," Hart said. "Sticking him down in the bowels is death at EPA."

Others linked to Hart would also drop the lobbyist’s name in discussions with Jackson. One of those emails was centered on the Paris climate agreement.

"We are a client of Steve Hart’s and he’s traveling today but suggest I reach out to you. Do you have a couple of minutes for me to call on you on the subject of the agreement," said an executive with global bank HSBC.

After having outside counsel audit its lobbying disclosure forms, Hart’s old lobby shop, Williams & Jensen PLLC, amended several of its reports to show that Hart had lobbied EPA for some of its clients (Greenwire, June 4). The firm, however, has not reported lobbying the agency on behalf of HSBC.

"We have no plans to file any additional EPA-related amendments," a Williams & Jensen spokesman told E&E News.

Hart, who was chairman of Williams & Jensen, has said that he didn’t have lobbying contact with EPA in 2017 or 2018. In addition, Pruitt said in a Fox News interview that Hart didn’t have clients with business before the agency.

Hart’s emails, however, show that he was often in touch with EPA over the past year. Wilcox said the lobbyist didn’t sway the agency’s work.

"Many of these emails were unsolicited and did not impact any agency policy outcomes," Wilcox said.