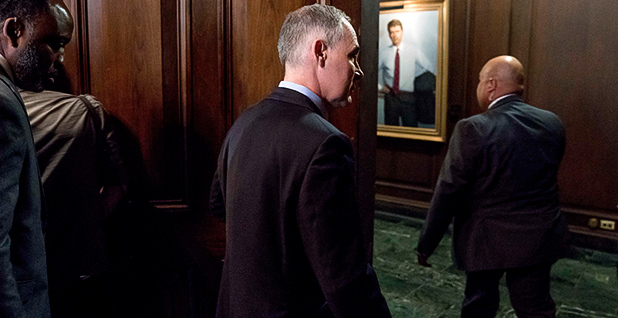 Discussions on whether to provide 24/7 security for EPA Administrator Scott Pruitt began days before his arrival at the agency.

Internal EPA emails obtained by E&E News show that in the week leading up to Pruitt’s Senate confirmation in February 2017, there were concerns among agency staff and President Trump’s appointees over security for the incoming EPA chief. Pruitt’s around-the-clock protection has attracted scrutiny as Democrats have questioned whether the greater costs imposed on the agency are warranted.

Don Benton, a former Washington state senator and EPA’s senior White House adviser who led Trump’s "beachhead" team at the agency, requested in one email that Pruitt have 24/7 security as a temporary measure. He said that security stance should be evaluated after its first week.

"Also, I have requested 24/7 protection for the new administrator for the first week at least and then evaluate from there," Benton said in the Feb. 11, 2017, email. He said he favored moving with caution by asking for stepped-up security, given the potential backlash against Trump policies as well as two security incidents — one in the EPA Region 4 office, the other involving a former EPA employee threatening former Administrator Gina McCarthy.

"There will be several Executive Orders signed when he is sworn in that will likely stir the hornets [sic] nest and with the security issue in the Atlanta office last week as well as the lady who threatened former administrator McCarthy not showing up for court and at large in DC it is best to be on the safe side."

Just a few days before Benton’s email, a woman walked into an EPA library in its Region 4 Atlanta office. She became disruptive, grabbed an EPA security guard’s gun and fired it during a struggle before she was subdued.

The other case involved a former EPA employee, who after she was fired in 2011, began sending bizarre emails to agency staff. She was spotted outside EPA’s headquarters in Washington and had made threats against McCarthy. Her case was later dismissed in November last year.

Benton has since left EPA after reported friction with Pruitt. In April last year, he was sworn in as the director of the Selective Service System and is still at that agency.

Pruitt has cited threats against him as why he has needed increased security, referring to investigations by the EPA Office of Inspector General in congressional testimony last month. The IG has since sought to distance itself from those remarks, saying the watchdog office has no role in Pruitt’s security decisions.

IG Arthur Elkins told senators in a letter yesterday that Pruitt’s 24/7 security detail began on his first day in office.

"The decision was made by the Office of Criminal Enforcement, Forensics and Training after being informed that Mr. Pruitt requested 24/7 protection once he was confirmed as Administrator. The OIG played no role in this decision," Elkins said.

In February 2017, E&E News reported that agency officials were preparing to provide 24/7 security for Pruitt. That was a step up from prior administrators, who had door-to-door protection during the workday (Greenwire, Feb. 20, 2017).

"Based on conversations with the transition team, we anticipate that Mr. Pruitt will initially request a 24/7 detail," said Henry Barnet, the director of EPA’s criminal enforcement office, in a Feb. 16 email last year.

In response to the IG’s letter, an EPA spokesman said the decision to give Pruitt 24/7 security was made before he arrived at the agency.

Other EPA emails obtained by E&E News show career officials at the agency discussing how to provide greater security for Pruitt.

"Clearly we’ve thought about this before. Seeing what’s been done with other details when this has happened, it essentially takes about a 16 person team to pull it off. That would basically mean doubling our paper number of 8," said Eric Weese, who was then the acting EPA special agent in charge of the administrator’s security detail, in a Feb. 9, 2017, email.

Documents obtained by E&E News under the Freedom of Information Act show that costs for Pruitt’s personal security detail during his first months in office were nearly double what was spent on protection for his predecessors during the Obama administration (Greenwire, July 5, 2017).

Weese continued on to say 24/7 security would strain EPA resources.

"If this is going to be the expectation on day one, [Criminal Investigation Division] management is going to immediately need to be brought into the conversation in order to provide the bodies needed to make this happen until new hires can be brought in. I can see this being a major disruption on Region 3 [EPA’s Philadelphia office] CID assets at the onset, but there will be no other way to pull this off. We did this exact thing for Whitman in 2001," Weese said.

Christine Todd Whitman, President George W. Bush’s first EPA administrator, told E&E News that she did not know what Weese was referring to.

Whitman said she couldn’t speak to the threats Pruitt has faced, but security guards were not around her at all times. She said security would travel with her on out-of-town trips and may have followed behind her when going to events in Washington.

"I walked to work by myself. I did not have 24/7 security," Whitman said. "EPA is not a high-priority target. It is just not. You are not even a full Cabinet member. You are an administrator, not a secretary."

Barnet, the criminal enforcement office director, replied to Weese’s email about an hour later, asking the agent to come up with an "options paper" regarding Pruitt’s security. Barnet asked for cost estimates to keep security at its current level, hiring a contract detail as well as going to 24/7 protection.

The New York Times reported last month that Weese was removed from Pruitt’s detail after he questioned some of the new security measures for the administrator.

Pasquale "Nino" Perrotta, another career EPA agent who replaced Weese as the head of Pruitt’s detail, has since retired after his own actions have come under scrutiny. The EPA IG is reviewing agency spending on Pruitt’s security and expects to release its audit this summer.