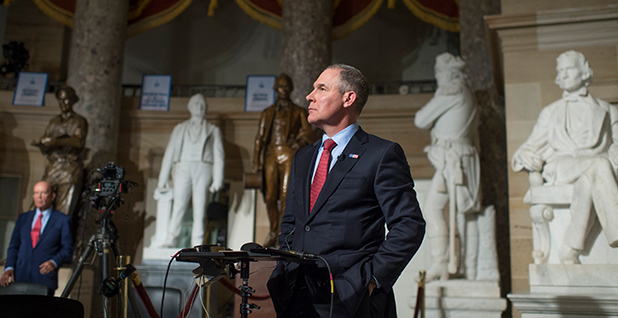 Mike Catanzaro, who’s slated to leave the administration next week, is among the White House officials who have resisted the EPA chief’s plans for a "red team, blue team" debate aimed at challenging mainstream climate science. That exercise is widely seen as a first step toward unraveling EPA’s endangerment finding for greenhouse gases, a determination that underpins climate regulations.

Catanzaro was among the White House officials who conveyed to Pruitt last year that the debate — as Pruitt envisioned it — wasn’t going to happen (Climatewire, March 14).

"It’s now up in the air again," said Myron Ebell of the Competitive Enterprise Institute.

Some conservatives would like to see the endangerment finding obliterated, but many industry representatives and Republicans contend that the effort would be legally precarious.

Catanzaro has been "a guardrail against some of the more crazy ideas that people within the White House and certain agencies in his portfolio were wanting to try, like red team," said an industry source close to the administration. As for the endangerment finding, Catanzaro recognized "it’s a heavy, heavy lift" legally, that person said.

Pruitt hasn’t given up on the red-team idea, despite the pushback from the White House. And some suspect that the EPA boss might try harder on the issue now that conservative champions of that idea have come out strongly to support him in the wake of a string of allegations about ethical lapses (Climatewire, April 16).

Pruitt spoke last week at the conservative Heritage Foundation to a group interested in dismantling greenhouse gas regulation. Participants at the meeting said afterward that Pruitt is "hot to trot on attacking climate science again," said a person familiar with the meeting.

Catanzaro was seen as an effective operator who pushed back on Pruitt’s ideas that some saw as designed to please the conservative base.

"There was tension between them," said an energy industry source.

Pruitt has been pushing the idea of a climate science "red team" since at least July. He told Reuters last summer that "the American people deserve an honest, open, transparent discussion" about climate science. "What do we know? What don’t we know? Does it pose an existential threat, what can be done about it?" he said.

Trump told Pruitt previously that he supported the idea of a climate debate, but his aides have worked to shut it down. And while Catanzaro has been one of the leading critics of Pruitt’s version of a red-team debate, he isn’t the only White House staffer who has fought it. Trump’s chief of staff, John Kelly, was also among those who opposed the exercise.

Marc Morano, a former staffer for Sen. Jim Inhofe (R-Okla.), said he doesn’t think Catanzaro’s departure will have a big impact on the fate of the red team. "Pruitt feels empowered to do what he set out to do, and he has the president backing him," he said.

Even if the exit of Catanzaro and other aides in recent weeks creates an opening for Pruitt, pursuing a red-team climate debate and an endangerment finding challenge would be drastic steps.

Catanzaro was seen as someone who could build connections across agencies, with Capitol Hill and industry. Attempting to exploit his absence could end up backfiring, said Jim Connaughton, who was Catanzaro’s boss when he led President George W. Bush’s Council on Environmental Quality.

"It’s hard to do those things with speed, with durability and predictability when you don’t have interagency buy-in and coordination with outside stakeholders," he said. "So there’s risks, as well."

Catanzaro has been a key player in setting the administration’s energy and environmental policies.

Those include plans to repeal President Obama’s Clean Power Plan. "I think he is doing what he can to do the work that you would normally hope the agency would do, definitely on the Clean Power Plan specifically," said the industry source.

Still, industry voices that are influential with the Trump administration have argued for regulatory clarity and opposed broadsides against the endangerment finding. That has hindered the success of Pruitt’s allies outside the administration. Trade organizations like the National Association of Manufacturers and the U.S. Chamber of Commerce favor scaled-back power plant regulations rather than a tear-it-all-down strategy.

"It’s less base-pleasing to come up with a solution that fills a hole, but he was one of the people who did that," an industry analyst said of Catanzaro. "He understands the importance of ‘write it again’ as a solution for stakeholders, even though it’s not politically the most popular choice."

The White House yesterday announced that Francis Brooke, an aide to Vice President Mike Pence, will be taking over Catanzaro’s job as energy and environmental adviser. He’ll be working for National Economic Council Director Larry Kudlow, who recently took over for Gary Cohn. The 28-year-old former Capitol Hill aide doesn’t have the extensive energy resume that Catanzaro does.

"The White House energy staffer has to conduct the many offices and agencies like an orchestra playing a symphony," said Christopher Guith, senior vice president for policy at the U.S. Chamber of Commerce’s Global Energy Institute, in an email. "Knowing who can do what and when and anticipating reactions and outcomes isn’t always intuitive. Mike’s breadth and experience make him a great conductor and he leaves very large shoes for the President to fill."

Catanzaro’s departure has long been expected, the industry source close to the administration said.

"This has been talked about for months. Now it’s here," the sources said. "No one is surprised. Everyone is agitated. No one is happy."