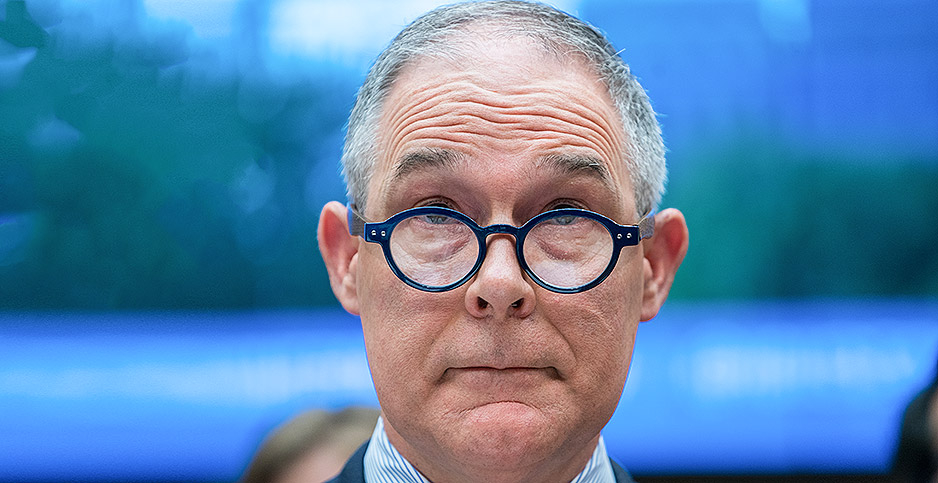 When you’re an embattled EPA administrator, it helps to have a well-connected lawyer.

In a letter to E&E News, Karl Leo, an attorney representing Hendricks, said she was approached by Mitchell, who he said is a friend of hers, about donating to Pruitt’s fund.

"Ms. Mitchell asked Ms. Hendricks to make the donation because Mr. Pruitt was being subjected to a variety of unfair legal charges and proceedings and he needed funds to defend himself against such charges while he served his country as the USEPA Administrator," said Leo, founder and president of Leo Law Firm LLC in Huntsville, Ala.

He added, "Ms. Hendricks has no other relationship with Mr. Pruitt and does not know him personally."

Contacted by E&E News, Mitchell said she had nothing else to add on the contents of Leo’s letter.

According to the Office of Government Ethics template for such funds, legal defense fund beneficiaries — in this case, Pruitt — cannot solicit donations. But trustees, like Mitchell, are allowed to do so.

"That is why we have the trustee soliciting contributions. We don’t want the EPA administrator going around, knocking on doors, asking for money to his legal defense fund," said Delaney Marsco, ethics counsel for the Campaign Legal Center.

"The possibility for corruption is high when you have a powerful government official seeking contributions for their legal defense fund."

"All of Diane’s pursuits are guided by her strong patriotic and conservative values," says her bio on the company’s website.

Democrats on Capitol Hill have sought more information from EPA on how Hendricks’ interests could be affected by the agency.

In a letter this January, Sens. Tom Carper (D-Del.), Sheldon Whitehouse (D-R.I.), Tom Udall (D-N.M.) and Chris Van Hollen (D-Md.) asked for communication records between EPA and nearly two dozen companies linked to Hendricks as well as Hendricks herself since the beginning of Pruitt’s tenure at the agency. In addition, the senators asked for a list of any investigations or enforcement actions brought by EPA against those companies within the last five years.

A Whitehouse spokesman said the senators had not received a response from EPA to their letter on Pruitt’s legal defense fund. EPA press officials did not respond when asked whether the agency planned to reply to the letter.

Several facilities in EPA’s enforcement and compliance history database are named ABC Supply or some variation of that name. Some of those facilities — including one in Charleston, S.C., one in Durham, N.C., and one in Nashville, Tenn. — have had an inspection within the last five years.

Those facilities faced inspections by either EPA or a state agency under the Resource Conservation and Recovery Act or the Toxic Substances Control Act, both of which are overseen by EPA.

In his letter, Leo confirmed that those facilities are either owned or leased by ABC Supply, which occupies commercial real estate throughout the United States.

"I am not aware of any EPA matters concerning ABC other than the matters you have identified in your email," he said. "None of these inspections resulted in any citation or consequence to ABC. All these matters appear to be routine and local in nature."

But Marsco said the presence of ABC Supply in EPA’s enforcement database prompts concern that the company of Pruitt’s donor had interests before the agency.

"It definitely raises the question whether this company is a prohibited source," she said.

"I can’t say for sure that ABC Supply is or isn’t because I don’t have the specialized knowledge of an EPA ethics official who is on the ground making these determinations dealing with the agency’s business," she added.

Hendricks has contributed millions of dollars to Republican causes but has a seemingly light lobbying presence in Washington, D.C.

Broydrick & Associates has reported lobbying for NorthStar Medical Radioisotopes LLC, a partial subsidiary of Hendricks Holding Co., according to Leo. Records show that the firm has lobbied on nuclear medicine, which has brought it into contact with the Department of Energy as well as Congress.

The firm has not disclosed any EPA lobbying on behalf of the company, according to its disclosure reports.

"I have never talked to EPA on behalf of Hendricks Holding Co. or Northstar Medical Radioisotopes. That is the long and short of it," Bill Broydrick, founder of the firm, told E&E News.

"Broydrick has not lobbied EPA on behalf of Northstar or [Hendricks Holding Co.]," Leo said in his letter.

Asked if he helped solicit or facilitate Hendricks’ contribution to Pruitt’s fund, Broydrick said, "No."

Emails obtained by E&E News under the Freedom of Information Act also shed more light on the early concerns and confusion over who could give to Pruitt’s fund while he ran EPA.

In an email on April 26 last year, Mitchell asked OGE officials a number of questions on who could — and who could not — donate to Pruitt’s fund.

Mitchell asked if Pruitt, or "the Beneficiary," could contribute to his own fund and if a company or industry with no business before EPA was barred from giving to the then-EPA chief’s fund. In addition, the attorney asked if "a passive investor" in an entity with interests before the agency was also banned from giving.

"Is that investor a prohibited source?" Mitchell asked.

She also noted that she had been looking elsewhere for help.

"I have looked at the opinions related to ‘interests that may be substantially affected’ by the agency — and find no real guidance. If you have such guidance, I’d be happy to review it, but this is what I need to discuss and try to get some clarification about," Mitchell said.

In her email, Mitchell was referencing a provision in ethics law that describes a "prohibited source" — someone who cannot give gifts, such as contributions to legal defense funds, to government officials. Such a person would be seeking action by that official’s agency, doing business with the agency, being regulated by that agency or have interests that could be greatly affected by the agency.

Marsco with the Campaign Legal Center said OGE can provide guidance to trustees of defense funds, although their expertise would not be specific to EPA.

"Their role is to advise on the overarching legal framework of accepting a contribution," she said.

"Part of the reason why trustees should go to agency ethics officials is because those folks are really equipped with the specialized knowledge about what business is actually in front of the agency," she said.

"They would be able to determine if a company has a business before the agency and determine if this is a prohibited source."

Mitchell and the OGE officials had a phone call the next day, in which those with the ethics agency answered her questions.

OGE records memorializing the call show officials said Pruitt could contribute to his own fund, but it would raise "appearance concerns."

In addition, the OGE officials told Mitchell that as the trustee of Pruitt’s fund, she was required to consult with an EPA ethics official as needed within 30 days of his fund receiving a contribution or notice that someone was willing to donate to the fund to obtain a ruling "as to whether the contribution is from a prohibited source." They referred her to OGE’s template for a legal defense fund, which includes that stipulation.

An OGE legal advisory from September 2018 also provides guidance on legal defense funds, specifically stating that agency ethics officials should be consulted on contributions to the funds.

The OGE officials told Mitchell a donor to Pruitt’s fund would not be a prohibited source "merely by investing" in a company affected by EPA as long as that person doesn’t serve as an officer or employee of that company.

No consultation on contribution

Days before Mitchell’s email and subsequent call with OGE officials, Pruitt’s fund had already received a contribution. Hendricks made her donation on April 24 last year, according to IRS filings for the fund.

Mitchell did not discuss that contribution with EPA ethics officials.

Fugh noted on Pruitt’s last financial disclosure report, which disclosed Hendricks’ contribution to his legal defense fund, that EPA ethics officials were not aware of the donation until they received his form.

Mitchell previously told E&E News she had emailed EPA’s ethics office to discuss Pruitt’s fund and soon after was contacted by a New York Times reporter. Angered by the leak, she did not engage further with EPA ethics officials regarding Pruitt’s fund.

Fugh has said she and her staff did not contact the Times about the fund.

In response to questions from E&E News about this story, Mitchell referred to a previous reply she gave describing the episode where the existence of Pruitt’s fund leaked and how she consulted OGE officials for months about the fund (E&E News PM, March 6, 2019).

Contacted by E&E News for this story, an OGE spokeswoman said the ethics agency does not discuss specific individuals.

Mitchell’s talks with OGE regarding Pruitt’s fund stretch back to the prior year before it became news. She contacted the ethics agency in November 2017 to say she had been brought on by the then-EPA chief.

"I have been retained by EPA Administrator Scott Pruitt to establish and serve as Trustee for a Legal Expenses Trust Fund," she said in an email then. Mitchell said the fund would pay legal costs stemming from a bar complaint against Pruitt for having previously sued EPA before he joined the agency.

In October last year, Mitchell shared few details about that complaint with E&E News but did say it had been dismissed (Greenwire, Oct. 4, 2018).

E&E News filed a FOIA request with OGE for communications records related to Pruitt’s fund. OGE initially denied that request, saying it could neither confirm nor deny the existence of those records in order to protect Pruitt’s privacy.

E&E News appealed that decision, saying Pruitt had publicly acknowledged the existence of the fund at a Senate hearing in May last year (Greenwire, May 16, 2018). OGE then reviewed Pruitt’s congressional testimony and decided that releasing records related to his fund would not violate his privacy.

Pruitt set up the legal defense fund as investigations probing his actions at EPA piled up. Overwhelmed by his ethics troubles, he resigned from the agency last July.

Regulation on the horizon

OGE so far has offered only guidance for legal defense funds like Pruitt’s, but that may soon change. The ethics agency is considering regulation of the funds, which could include contribution limits and disclosure requirements, according to a Federal Register notice last week.

Marsco noted OGE’s proposal, but said that as of now, "There is no statutory or regulatory framework for the defense funds. We only have the gift rules.

"There is no other mechanism for oversight. It really is a direct flow of money to a member of the executive branch. We should have high scrutiny of who gives to these funds," she said.

Like his other actions at EPA, Pruitt’s legal defense fund sparked ethics worries — although that was not his attorney’s hope. In an email from April last year, Mitchell thanked OGE for its help.

"As I’ve said, my primary concern is to ensure we are doing everything in compliance with the Ethics guidelines for a legal expenses trust," Mitchell said.

"Those are my instructions from the beneficiary, Mr. Pruitt, and is my goal as well."