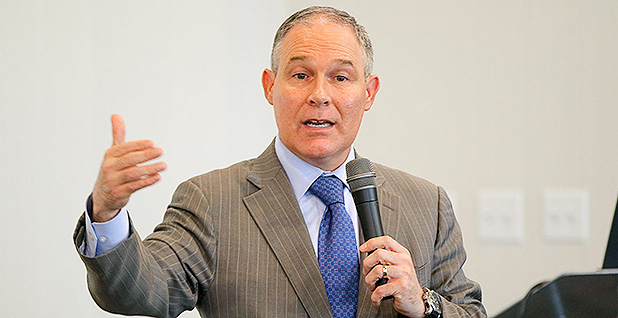 OKLAHOMA CITY — The Oklahoma attorney general’s office will have until Tuesday to turn over as many as 3,000 documents related to Attorney General Scott Pruitt’s communications with oil, gas and coal groups, a state district judge ruled yesterday.

The legal action happened as Democrats vowed to talk all night, and they did, on the Republican attorney general’s nomination to be President Trump’s U.S. EPA administrator.

Yesterday, Democrats who boycotted an initial vote on Pruitt in the Senate Environment and Public Works Committee failed in their quixotic bid to delay a full Senate confirmation vote scheduled for this afternoon. Senate Majority Leader Mitch McConnell (R-Ky.) refused to put the brakes on the process, as Republicans teed up the partisan battle to get Pruitt through the door before the Senate’s Presidents Day recess.

Pruitt angered Democrats during the confirmation process when he said senators should file a state freedom-of-information (FOI) records request with the Oklahoma attorney general’s office, which he controls, if they wanted to read his email communications with energy companies, conservative groups and lawyers hostile to EPA.

In press conferences and floor speeches during the day and into the night, Senate Democrats rapped Pruitt for his role as a coordinator of like-minded attorneys general and fossil fuel companies that repeatedly sued to overturn tougher EPA air and water rules under President Obama. Pruitt has his signature on more than a dozen lawsuits against the agency.

"Are you kidding me?" said Sen. Elizabeth Warren of Massachusetts. "If those emails show corruption, every senator should have that information before, not after, they put someone in charge of EPA."

In tone and focus, Pruitt’s legal challenges against EPA reflected the priorities of right-leaning groups with close ties to the oil industry’s Koch brothers and represented the interests of Oklahoma-based gas giant Devon Energy Corp. and politically powerful coal companies such as Peabody Energy Corp. The suits sought to stop the agency from enforcing limits on power plant emissions of carbon dioxide, a contributor to climate change, and mercury, a neurotoxin, and took aim at the Clean Water Act.

Pruitt’s supporters point to his commitment to preserving state supremacy over environmental regulation and say he will rein in EPA’s overreaching tendencies.

Senate Democrats, led by Sen. Tom Carper of Delaware, pinned much of their hope of stirring up opposition to Pruitt through the timely release of his office’s emails with energy companies sought by the liberal-leaning Center for Media and Democracy, based in Madison, Wis.

Other than a 400-page batch of emails released last Friday, in response to the center’s original unanswered request two years ago, the Senate isn’t likely to see the fuller 3,000-page response to nine FOI requests for documents out of Pruitt’s office before the confirmation vote.

Under the ruling, the attorney general’s office will have to turn the material over to the Center for Media and Democracy or provide it to the court for inspection, Judge Aletia Haynes Timmons said at the end of a 25-minute hearing.

"The court rules there was an abject failure to provide prompt, reasonable access," Timmons said from the bench.

She ordered the state to turn over other documents, from separate requests in 2015 and 2016, within 10 days. The attorney general’s office can appeal the ruling, attorneys in the case said.

Brady Henderson, an attorney for the Oklahoma Chapter of the American Civil Liberties Union, said the Senate should view the documents before voting on Pruitt’s nomination. Henderson assisted other Oklahoma attorneys to represent the Center for Media and Democracy in the case.

The state’s legal staff left the court building without speaking to reporters. But the attorney general’s office said in a statement that it is "committed to following the letter and spirit" of the state’s open records law. The statement also alluded to the office’s first-come, first-served process for handling records requests, a process issue that has become a focal point of the case.

"In light of that, we are reviewing all of our options in order to ensure fairness to all requestors rather than elevating the importance of some requests over others," said the AG’s office.

The Wisconsin group has said the unusual process of handling government records requests has been a handy tool for delaying releases. The Center for Media and Democracy made its first documents request in January 2015, along with eight new requests since then, for emails and documents dating to 2013.

Pruitt’s staff have continued to say they answer open records requests in the order in which they’re received and that they’ve been overwhelmed with requests since he was nominated to lead EPA (Energywire, Dec. 20, 2016).

Pruitt has been Oklahoma’s attorney general since 2011 and has forged close ties with energy companies. The New York Times reported in 2014 that he had pulled language directly from letters and legal briefs written by industry lawyers as part of his campaign to challenge federal regulations (Greenwire, Dec. 8, 2014).

Like most states, Oklahoma allows government agencies to withhold some documents from the public in narrowly tailored circumstances, but lawyers for the attorney general’s office couldn’t immediately explain why the documents hadn’t been produced for more than two years.

At one point during the 25-minute hearing, Timmons interrupted Assistant Attorney General Jeb Joseph and read aloud from the state open-records statute, which says, "The people are invested with the inherent right to know and be fully informed about their government."

Among the missing documents were letters and emails that the state had previously provided to The New York Times, which the center said was evidence that the state withheld material in its response.