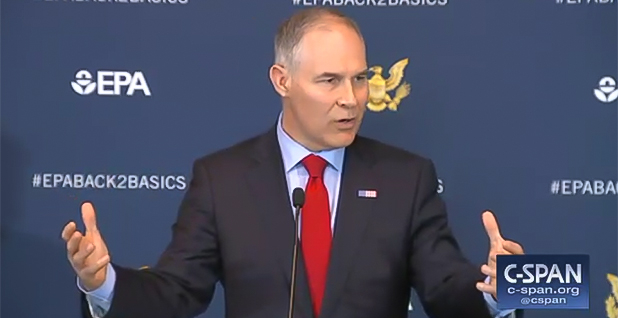 A December trip to Morocco by EPA Administrator Scott Pruitt could benefit Carl Icahn, an activist investor who holds a controlling stake in the largest U.S. natural gas exporter and who helped Pruitt secure his position in President Trump’s Cabinet.

Icahn, made famous as a corporate raider in the 1980s, captured Houston-based Cheniere Energy Inc. through aggressive stock buys in 2015, using his holdings to force out Cheniere’s founder and CEO, Charif Souki. He quickly remade the company’s management, which he had accused of taking outsized risks, and directed Cheniere to get its Gulf Coast liquefied natural gas export terminals up and running.

As Pruitt faces intense scrutiny for his expensive travel and close ties to corporate lobbyists, the EPA administrator’s trip to Morocco is attracting more questions. At the time, EPA said Pruitt’s agenda for the overseas trip included exploring "new and ongoing areas of collaboration" under a U.S.-Morocco free-trade agreement and Morocco’s "interest in importing LNG."

Pruitt’s advocacy for LNG during the brief trip surprised many at the time because EPA plays no major role in LNG exports. The Department of Energy has authority over exports of the commodity, while the Federal Energy Regulatory Commission oversees the facilities that ship the gas (Greenwire, Dec. 13, 2017).

Congressional Democrats have demanded more information from EPA on the trip, including on why Pruitt chose not to be briefed by career staff in the agency’s Office of International and Tribal Affairs. Instead, Pruitt relied on EPA political advisers.

Pruitt’s trip seems in line with the Trump administration’s "energy dominance" doctrine, which calls for increased U.S. energy production and a focus on energy exports to bolster U.S. influence abroad.

Some observers point to Pruitt’s loyalty to natural gas producers in his home state of Oklahoma as a possible explanation for his eagerness to proselytize for LNG exports.

Then Icahn got his own job in the administration as Trump’s unpaid special adviser on regulatory reform. The New York mogul held the role until August 2017, after coming under fire for pushing for changes to federal renewable fuel standards, administered by EPA, that would benefit a refinery he owns. Advocacy group Public Citizen called for an investigation into whether Icahn’s work on RFS reform violated lobbying disclosure laws (E&E Daily, March 8, 2017).

Paul Bledsoe, an Obama-era Energy Department consultant, said Pruitt’s Morocco trip and others planned for Japan and Israel, which did not happen, were about burnishing Pruitt’s credentials as a political partner to the oil and gas industry.

"I can’t speak to the validity of Pruitt’s travel and agendas, but the idea that he thought promoting natural gas is good for the global environment and part of his job is not totally outlandish," she said.

Ladislaw noted that his predecessor, Gina McCarthy, often praised renewables at appearances when she was in the job. The former administrator’s international travel included conferences, like the 2015 Paris climate summit, and trips like her 2013 foray to China to discuss bilateral engagement on air quality and climate issues.

"If anything, it is by Pruitt’s own measures that I would find his activities strange, as an administrator of legislative prerogatives and [as] a conservative talking about shrinking the size, role and reach of government," Ladislaw said. "Those trips seem like an extension of his mandate rather than within his core mandate."

The State Department’s Bureau of Energy Resources is the natural ambassador for U.S. energy interests abroad, especially when they collide with geopolitics, but acting special envoy and coordinator for international energy affairs John McCarrick has yet to be confirmed and Frank Fannon, the pick for assistant secretary of State for energy resources, hadn’t been nominated when Pruitt headed for North Africa.

Prolific U.S. gas production has made finding new markets abroad an industry priority, but Asia is higher on the list of potential buyers. Morocco has been working to line up financing and support for an LNG import terminal, which would reduce the country’s current reliance on Algeria for natural gas pipeline supplies. Morocco is also connected to European gas markets as the Algerian pipeline continues on to Spain, making connecting the North African country to LNG supplies a potentially appealing policy goal for other countries in southern Europe.

Morocco relies heavily on coal for power, and while it is building its solar sector with ambitions to become a significant green energy exporter to Europe, it has called for greater gas use in both the power and industrial sectors. Morocco’s nationally determined contribution to the Paris climate accord calls for 3,500 megawatts of combined-cycle gas-fired power by 2025, sourced from LNG.

"Right now the U.S. is a superpower in terms of gas production, gas exports," she said. "And right now gas is very challenged because of greener renewables or more competitive, cheaper coal, depending on the country. So you need to make the case that gas is a valuable fuel when you’re trying to catch your carbon emissions."